La Jolla, CA – Controlled by a tightly regulated choreography that determines what should go up and what should go down, plants develop along a polar axis with a root on one end and a shoot on the other.

While studying why a defective TOPLESS gene causes plant embryos to develop into a seedling topped with a second root instead of a stem with leaves, researchers at the Salk Institute for Biological Studies hit upon the linchpin that ensures that plants are neither all root nor all shoot.

Turns out the question, “Root or shoot?” literally hinges on the EAR domain, a short protein sequence only six amino acids long. 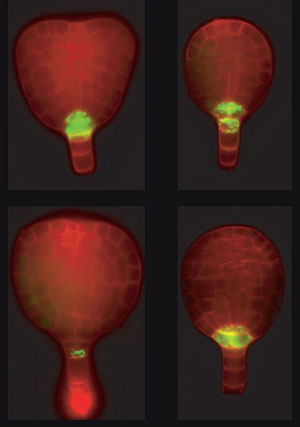 The lens shaped cell (shown in green) at the base of the plant embryo (shown in red) will go on to form the center of the root meristem – the actively dividing cell tissue at the tips of roots. It fluoresces green in response to auxin, which governs root development (top left). Embryos with a mutation in the TOPLESS gene still respond normally to auxin (top right), while embryos without a functional version of BODENLOS cannot respond to auxin and as a result fail to develop roots (bottom left). Combining both mutations restores the auxin response as well as root development (bottom right).

The Salk researchers’ findings, published in the Feb. 7 issue of Science Express, explain how mutations in TOPLESS can switch a plant cell’s fate from shoot to root and in the process clarify the purpose of the so-called EAR motif, a protein domain whose function has puzzled plant scientists for several years.

“We’ve known for a while that the EAR domain can turn off transcription, but how it did this was an open question,” says the study’s lead author, Jeffrey A. Long, Ph.D., an assistant professor in the Plant Molecular and Cellular Biology Laboratory. “We didn’t set out to fish for molecules that bind to the EAR domain, but when we used TOPLESS as a bait, that’s what we found.”

Scientists and home gardeners alike have been messing with plants’ basic architecture for years: Permanently switch on a gene called BODENLOS (or bottomless) and plants forgo root development altogether. Dip plant cuttings into hormone rooting powder and roots start to sprout where none have been. The active ingredient, a synthetic version of the plant hormone auxin that regulates root growth in plants, overrides the molecular switch that keeps auxin-responsive genes turned off in parts of the plant that are above ground.

In an earlier study, Long and his team had discovered that the switch is none other than TOPLESS, the protein encoded by the TOPLESS gene. It had become clear that TOPLESS functions as a so-called co-repressor, which regulate gene expression by inhibiting the activity of transcription factors. Transcription factors control gene activity by binding to DNA sequences adjacent to a gene. But exactly how TOPLESS silences genes necessary for root development has remained unclear.

Hoping to gain insight into how TOPLESS functions by looking at the company it keeps, lead author Heidi Szemenyei, a former graduate student in Long’s lab and now a postdoctoral researcher at UC Berkeley, searched for interacting partners in the plant Arabidopsis thaliana. This wee weed was the first flowering plant to have its genome unlocked and is loved by plant biologists for its short generation time.

She discovered that BODENLOS, a transcriptional repressor that silences auxin-responsive genes, relies on its EAR domain to recruit the co-repressor TOPLESS to help with the job. While auxins are found throughout the whole plant, BODENLOS is only active in the shoot, ensuring that no accidental roots sprout above ground.

“The coupling of TOPLESS to BODENLOS provides an elegant mechanism for the plant to control the activity of auxin-responsive genes,” says Long.

Mike Hannon, a graduate student in Long’s lab also contributed to the study.