LA JOLLA, CA—Renato Dulbecco, M.D., Nobel Prize winner and a global leader in cancer research passed away February 19 at his home in La Jolla. Born on February 22, 1914, he was just shy of his 98th birthday.

Dulbecco was a Founding Fellow of the Salk in 1963 when the Institute’s labs were erected in temporary structures on a windswept bluff above the Pacific Ocean. He conducted landmark studies that provided the first clue to the genetic nature of cancer and described how a tumor virus could insert its own genes into the chromosome of the cell it infects, and “turn on” the uncontrolled growth that is the hallmark of cancer.

This was the first solid evidence that cancer originates when a cell’s genes become mutated, or co-opted, and the breakthrough changed the way the research community viewed cancer. For his work in illuminating the complex genetic nature of the disease, Dulbecco shared the Nobel Prize in Physiology and Medicine in 1975, with two of his former students (Howard Temin and David Baltimore).

Dulbecco then turned his attention to the origins and progression of tumors in the breast, and his seminal research identified and clarified the roles of many genes responsible for breast development and their involvement in cancer. In this study, he was the first to use monoclonal antibodies to identify cells by their genetic signature—the unique proteins they display on the outside of their cells. Today, monoclonal antibodies form the basis of some of the most effective anti-cancer therapies available. 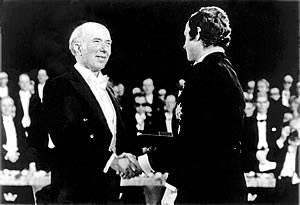 Dulbecco accepts the Nobel Prize in Physiology and Medicine, 1975.

His insights about how genes can both be used by cancer as well as used against the disease led Dulbecco in 1986 to challenge the scientific community to systematically sequence and catalog all human genes—giving intellectual birth to the 12 year long worldwide Human Genome Project, which has since opened new avenues to the understanding of cancer and its treatment.

“Renato was one of the most brilliant scientific minds of our generation,” said William R. Brody, president, Salk Institute. “His legacy is imbued in the scientists and physicians whom he trained and inspired and who themselves have gone on to make major discoveries to advance biomedical science. He will always be an integral part of the Salk community and our history, and we will deeply miss him.”

Dulbecco was born in Catanzaro, Italy, in 1914, and went to the University of Turin at age 16. He studied medicine, he says, “because of the strong emotional appeal” and obtained his M.D. in 1936. Dulbecco stayed at the university until he was called up for service as a medical officer in France and then in Russia, where he was injured during combat and hospitalized for several months. After Italy fell to the Germans, he joined the resistance, and after the war, he resumed his studies, dreaming, he recalls, “to work in the genetics of some very simple organism.”

In 1947, Dulbecco emigrated to the U.S., and joined the laboratory of his Italian colleague Salvador Luria, in Bloomington, Indiana. He soon shared bench space with James Watson, co-discoverer of the structure of DNA. Both Luria and Watson would later be awarded a Nobel Prize.

In 1949, Dulbecco moved to the California Institute of Technology, and there, along with Salk researcher Marguerite Vogt, pioneered the growing of animal viruses, in culture and developed the method, used universally since then, to assess the activity of the viruses grown in laboratory containers. Together they also first described how the poliovirus forms plaques in cell cultures – work that transformed virology from a descriptive to a quantitative science – and then how a virus can turn a cell cancerous. This research provided some of the first clues to the genetic nature of cancer.

Dulbecco was a fellow at the Salk from 1963-1972, and returned there in 1977 as a distinguished research professor after serving for five years as deputy director of the Imperial Cancer Research Fund in London. During his second tenure at the Salk, he also served, from 1977-1981, on the faculty of the medical school of the University of California at San Diego and was the president of the Salk from 1988-1992.

In addition to the 1975 Nobel Prize, Dulbecco was elected as a member to the National Academy of Sciences, the Royal Society of London, the Academia Del Lincei of Italy and was a recipient of the Lasker award. To highlight his achievements, the Salk established the Dulbecco Laboratories for Cancer Research and the Renato Dulbecco Endowed Chair in his honor. Dr. Tony Hunter, a professor in the Molecular and Cell Biology Laboratory and director of the Salk Institute Cancer Center is the inaugural holder of the professorship.

“Renato was an inspiring mentor, a dear friend and a true gentleman. His pioneering work using polyomavirus as a model for understanding human cancer had an enormous impact on the field of cancer research, setting the stage for all the subsequent molecular studies of the genes that cause cancer,” said Hunter. “He made us all better scientists.”

In addition to his genius for science and medicine, Dulbecco was also passionate about music. He was a classically trained pianist and performed opera.

“Renato was an inspiring and generous colleague who was always ready to share his many talents and knowledge with others,” noted Walter Eckhart, Salk professor emeritus, Molecular and Cell Biology Laboratory. “His contributions as a scientist and as a person really helped make the world a better place.”

Throughout his research at Salk, Dulbecco had remarked on the strong influence of his associates, but he singled out, in particular, his “young collaborators.” Dulbecco once wrote, “the daily interaction through the years with a continuously changing group of young investigators shaped my work.”