Ian Trowbridge, an esteemed researcher who had been a member of the Salk faculty for almost three decades, passed away on Wednesday, February 6.

Trowbridge grew up in Derbyshire, a county in the Midlands area of England and earned a doctorate in immunology at Oxford University. In 1972, he moved to San Diego, and shortly thereafter became a junior faculty member at Salk. He was promoted to full professor in 1983. 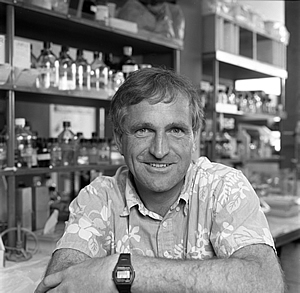 Trowbridge concentrated his expertise in molecular and cell biology on both normal and cancerous cells of the immune system. Prior to leaving the Salk, Trowbridge’s research focused on how proteins involved in Alzheimer’s disease move within cells.

“Ian was really interested in the proteins on the surface of cells in the immune system, which obviously are critical in our ability to mount a response to viruses and bacteria.” said Tony Hunter, professor in the Molecular and Cell Biology Laboratory and director of the Salk Institute Cancer Center who co-published several papers with Trowbridge.

After retiring from Salk in 2001, Trowbridge became a community leader and activist in San Diego. As an ambassador for open government, Ian served as an important voice for the community by attending public meetings of the San Diego City Council, the county Board of Supervisors, and the Port Commission. The retired scientist advocated for clean-needle exchanges to the fight spread of AIDS. He sued to stop developments over environmental issues and to prevent inflated severance packages for public officials.

Trowbridge was 65 years old, and is survived by his partner of twenty-one years Del Cunamay, his daughter,
Emma Tecca, son Christopher Trowbridge and four grandchildren.