“We were quite surprised by the unexpected quality control mechanism that ensures the quality of breast milk,” says Ronald M. Evans, Ph.D., professor in the Salk Institute’s Gene Expression Laboratory and a Howard Hughes Medical Investigator. “Our finding explains why breast milk is always clean and healthful, even when there’s a lot of inflammation going on in the mother’s body,” he adds.

The Salk research team – led by Evans – published their findings in the August issue of the journal Genes & Development. They hope that a better understanding of PPARγ could help explain the role lipids and inflammation play in hair loss and other skin disorders and facilitate the development of new treatments for these diseases. 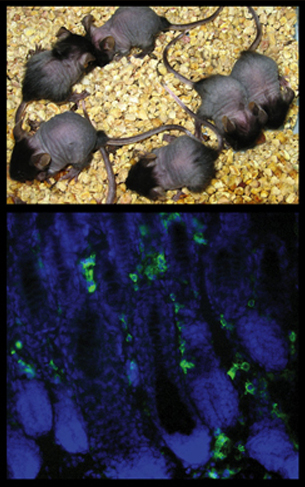 Top: Female mice that are deficient in the protein PPAR gamma produce toxic milk. The milk that was once wholesome and healthy instead causes inflammation, growth retardation and hair loss in nursing mouse pups.

Bottom: Skin of pups drinking toxic milk shows clear signs of inflammation, such as the infiltration by large numbers of macrophages, a type of white blood cell (shown in green).

PPARγ acts as a genetic switch, sensitizing the body to insulin and lowering levels of circulating glucose. In fact PPARγ drugs, including Actos and Avandia, belong to the newest generation of anti-diabetic medications. Naturally occurring mutations in PPARγ lead to obesity and insulin resistance associated with type 2 diabetes.

Unexpectedly, postdoctoral researcher and first author Yihong Wan, Ph.D., observed that mice lacking PPARγ in endothelial cells had trouble rearing their newborns. “Although the mothers seemed perfectly normal, the nursing offspring soon stopped growing and lost their hair,” says Wan. “It took us some time to figure out what was going on.”

If the pups were given anti-inflammatory drugs such as aspirin or ibuprofen, the symptoms reversed and their fur started to regrow. “These observations suggested that the milk produced by the mutant mice may be the source of the troubles,” explained Wan. A closer inspection revealed that the milk of PPARγ-deficient mice contained high levels of toxic fatty acids that set off an inflammatory response in the skin of nursing pups. According to Evans “by examining the action of PPARγ in vivo, our work revealed an unexpected link between diet, inflammation and the quality of breast milk.”

“Milk is considered a pure and nutritious nourishment. It forms the bond between mother and infant and is one of the true sustaining forces in life. Yihong’s work showed us that this does not simply happen but it is the product of an intricate genetic program that ensures its purity,” says Evans.

Researchers who contributed to the study include professor Benjamin F. Cravatt, Ph.D. at the Scripps Research Institute in La Jolla, California, Alan Saghatelian, Ph.D., a former postdoctoral researcher in the Cravatt laboratory and now an assistant professor at Harvard University in Cambridge, Massachusetts and postdoctoral researchers Ling-Wa Chong, Ph.D., and Chun-Li Zhang, Ph.D. in Evans’ laboratory at the Salk Institute.