LA JOLLA, CA—Scientists have uncovered a survival mechanism that occurs in breast cells that have just turned premalignant-cells on the cusp between normalcy and cancers-which may lead to new methods of stopping tumors.

In their Molecular Cell study, the Salk Institute researchers report that a protein known as transforming growth factor beta (TGF-β), considered a tumor suppressor in early cancer development, can actually promote cancer once a cell drifts into a pre-cancerous state.

The discovery—a surprise to the investigators—raises the tantalizing possibility that, with novel treatment, some cancers might be prevented before they even develop. 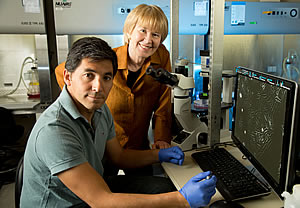 Fernando Lopez-Diaz and Beverly M. Emerson of the Regulatory Biology Laboratory at Salk.

“Our work suggests it might be possible to halt cancer development in premalignant cells-those that are just a few divisions away from being normal,” says the study’s lead author, Fernando Lopez-Diaz, a researcher in the Regulatory Biology Laboratory at Salk.

Agents designed to inhibit TGF-β are already being tested against cancers that have already spread, says Beverly M. Emerson, a Salk professor, head of the lab and the study’s senior author. “This study offers both significant insights into early cancer development and a new direction to explore in cancer treatment,” she says. “It would be fantastic if a single agent could shut down both advanced cancer and cancer that is primed to develop.”

Oncologists might also be able to use their discovery to predict whether premalignant cells in a patient are destined to become full-fledged cancer, Emerson adds. “Not all premalignant cells morph into cancer,” she says. “Many self-destruct due to cellular protective mechanisms. But some will become tumors and, at this point, there is no way to predict which of these cells are a risk.”

The two faces of TGF-β

TGF-β molecules are secreted proteins found in most human tissues. They play a number of different biological roles, including controlling cell proliferation and inflammation and assisting in wound healing.

The prevailing dogma in cancer research is that TGF-β signaling keep cells from morphing into cancer, says Lopez-Diaz. Scientists also recognized that cancer cells that “want” to spread learn how to use TGF-β wound-healing function to break from a tumor, he says.

Another protein, P53 is a known tumor suppressor. During the stress response that occurs as a cell becomes cancerous, and in response to chemotherapy, p53 attempts to repair DNA damage that has occurred, and, if not successful, p53 orders the cell to die. “The p53 pathway must be sabotaged for cells to become cancerous,” Lopez-Diaz says. “This happens when its gene becomes mutated, if the p53 protein is exaggeratedly degraded or, less appreciated, if p53 biosynthesis is impeded.” 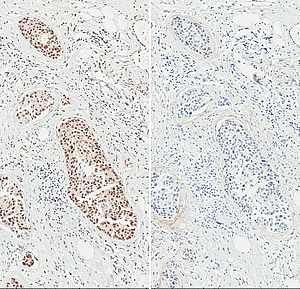 This image shows in brown color the activation of TGFβ signaling (left) and p53 levels (right) in a breast biopsy from a patient diagnosed with ductal carcinoma in situ and invasive carcinoma. TGFβ1 deactivates the main pathway directing the response to chemotherapeutic drugs and cellular stress, suggesting a potential new therapy to prevent early stages cancers progression and drug resistance.

The researchers conducted this study to learn exactly how p53 and TGF-β interact in cancer development. “For the past decade, everyone has believed that these two pathways work together in normal and premalignant cells to stop cancer, even though there was not much data to support this assumption,” he says.

The team examined premalignant as well as cancer cells from breast and lung tumors and matched normal and premalignant breast cells from healthy women provided by scientists at the University of California San Francisco.

But no matter how many different ways they did their experiments, the Salk researchers found that TGF-β can interfere with cells’ damage responses in premalignant or cancer cells.

In fact, they found that TGF-β halts both the transcription of the p53 gene-the process by which cellular machinery reads the DNA code for a gene-and the subsequent process by which the corresponding p53 protein is produced, known as translation.

This could explain why, in about half of the breast tumors, including premalignant lesions, that the team studied at both UC San Francisco and at Sanford Burnham Medical Research Institute, when TGF-β1 signaling was highly activated, the levels of p53 were reduced, and vice versa-if the TGF-β1 pathway was reduced, there were high levels of p53. “A similar trend was seen with PUMA, a protein which induces cell death,” Fernando Lopez-Diaz adds. “There was rather abundant PUMA protein when little TGF-β1 activation existed and vice versa.”

“The bad face of TGF-β emerged within just a few cell divisions away from normality, allowing cells to avoid death,” he says.

Filling in the cancer puzzle

This newfound immortality explains many oncologic mysteries, Lopez-Diaz says. “One is that it sheds light on how premalignant and early cancer cells are able to withstand the assault of chemotherapy and other treatments,” he says.

It may explain why 77 percent of breast cancers have a normal p53 gene, and it further suggests a way that cancer cells can use both to metastasize and survive the journey to organs where they set up a new home.

“Because it helps cells avoid death, TGF-β can reduce the negative impact that the metastatic process has in the cancer cells,” Lopez-Diaz says.

He adds that there is much work yet to do. “We want to understand the signals that turn TGF-β into a bad guy,” he says. “If we know that, we might be able to inhibit those signals, and force damaged cells to die, as they should. That may offer us another treatment possibility, along with TGF-β inhibitors now being tested.”

Other authors of the study are Sri Kripa Balakrishnan, from Salk; Philippe Gascard, Jianxin Zhao, and Thea D. Tlsty, from the University of California San Francisco; and Sonia V. del Rincon and Charles Spruck, from Sanford Burnham Medical Research Institute.

The study was funded by grants from the National Cancer Institute (U54CA143803), the Chambers Medical Foundation
and a Cancer Center Grant (P30 CA014195).