LA JOLLA, CA—Researchers at the Salk Institute for Biological Studies have discovered a powerful mechanism by which viruses such as influenza, West Nile and Dengue evade the body’s immune response and infect humans with these potentially deadly diseases. The findings may provide scientists with an attractive target for novel antiviral therapies.

Published in the August 2013 issue of the journal Cell Host and Microbe, the findings describe a novel mechanism that this group of so-called “enveloped viruses” uses to disarm the host’s innate immune response. The mechanism the scientists uncovered is based on these viruses activating a class of molecules, known as TAM receptors, which are located on the outside of certain immune cells.

In the immune system, TAM receptors are used by cells, such as macrophages and dendritic cells, to clean up dead cells, and they are also central inhibitors of the body’s innate immune response to bacteria, viruses and other pathogens.

The Salk scientists found that a substance called phosphatidylserine (PtdSer), which is found on the surface of enveloped viruses (viruses with an outer wrapping of a lipid membrane), binds to extracellular proteins and activates TAM receptors on immune cells. In dendritic cells, a type of immune cell that interacts with T and B cells to initiate the adaptive immune response, TAM receptor activation turns off a set of genes called interferons that play a key role in antiviral defense. 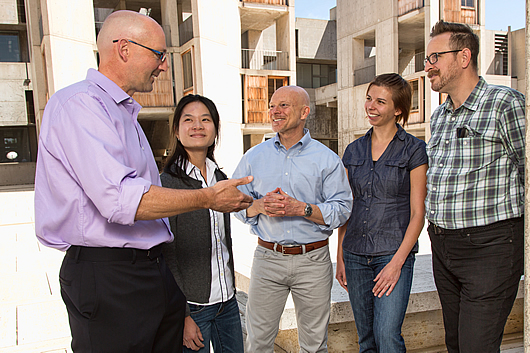 “Our findings suggest a unique way in which TAM receptors contribute to the establishment of viral infection by disabling the interferon response,” says co-lead study author John A.T. Young, a professor in Salk’s Nomis Foundation Laboratories for Immunobiology and Microbial Pathogenesis. “As a consequence, the interferon-stimulated defense genes are not turned on, rendering the target cell more permissive for virus infection.”

Understanding this mechanism allows researchers to work on developing broad-spectrum antiviral drugs that prevent viruses from shutting down the interferon response in cells by blocking TAM receptor activation. In their study, the Salk scientists tested a small-molecule drug called BMS-777607, initially developed for anti-cancer therapy, that does just that.

“With this small molecule, viruses can’t activate TAM receptors, so they can’t shut down the interferon response,” says co-lead author Greg Lemke, a professor in Salk’s Molecular Neurobiology Laboratory and the Françoise Gilot-Salk Chair, in whose laboratory TAM receptors were discovered.

With other scientists around the country, the Salk researchers are testing a variety of small molecule drugs in series of different viruses, including West Nile, Dengue, influenza, Ebola, Marburg, and hepatitis B. These drugs work, in large part, by blocking the virus’ ability to activate TAM receptors, thereby leaving the interferon-mediated antiviral response intact.

“This is a completely novel approach,” says Young, who holds the Nomis Foundation Chair at Salk. “It is a way of exploiting a normal piece of the cellular machinery in the immune system to block virus infections.” And, if it works, it may prove to be an effective treatment to clear enveloped viruses during the acute phase of infection and perhaps also in chronic virus infections.

Other researchers on the study were co-first authors Suchita Bhattacharyya and Anna Zagórska, as well as Erin D. Lew and John Naughton, from the Salk Institute; Bimmi Shrestha and Michael S. Diamond of Washington University; and Carla V. Rothlin of Yale University.

The study was supported by the National Institutes of Health, the Nomis and Auen Foundations, the James B. Pendleton Charitable Trust, a Salk Institute innovation grant, the Human Frontiers Science Program, and the Leukemia and Lymphoma Society.