Plants cut the mustard for basic discoveries in metabolism

Plants cut the mustard for basic discoveries in metabolism

LA JOLLA, CA—You might think you have nothing in common with mustard except hotdogs. Yet based on research in a plant from the mustard family, Salk scientists have discovered a possible explanation for how organisms, including humans, directly regulate chemical reactions that quickly adjust the growth of organs. These findings overturn conventional views of how different body parts coordinate their growth, shedding light on the development of more productive plants and new therapies for metabolic diseases.

Metabolism refers to all the chemical reactions in the body that drive the basic processes of life: birth, growth, reproduction, digestion, sensing and so on. These reactions are orchestrated and quickened by molecular machines called enzymes. Until now, it was believed that each metabolic function required an entirely separate enzyme pathway. Further complicating the picture, scientists focused almost exclusively on genes switching on and off as the means by which each step in the pathway was regulated, roughly analogous to waiting for a part to be ordered then manufactured before the engine can run.

In a paper in this week’s Nature Chemical Biology, Salk scientists and Howard Hughes Medical Institute Investigators Joanne Chory and Joseph P. Noel and their colleagues show that metabolic steps can be much more streamlined and linked. Unexpectedly, two separate pathways originally thought to be controlled solely by gene switches can have enzyme canals between them, allowing them to quickly share abundant building blocks for two separate chemical messages known as hormones. These hormones are manufactured in one part of the body in response to changes in environment and quickly alter growth in other parts. Many times, at least two hormones are needed to quickly adjust growth of different tissues in response to a single event. 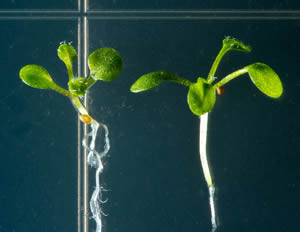 Upon sensing the threat of shade from a neighboring plant, Arabidopsis thaliana plants rapidly elongate different tissues by increasing the levels of growth-promoting hormones. This growth is regulated by the VAS1 enzyme. As seen in the photo on the right, plants lacking VAS1 have an exaggerated response to shade. 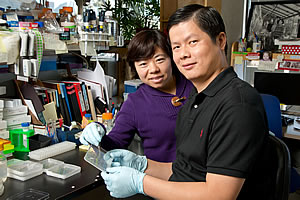 Photos: Courtesy of the Salk Institute for Biological Studies

“Genes are the instruction manuals for how cells build specific enzymes in a pathway, but if you have to wait for many enzymes to be made at the appropriate time in the right place to make several essential hormones, it’s too slow a response to environmental changes like light,” says geneticist Chory, the Howard H. and Maryam R. Newman Chair in Plant Biology, “It makes sense biologically that there is a faster, more direct way to coordinate and make these chemical messages.”

While such details may seem abstract, these basic biochemical insights are fundamental to the development of better crops and therapies for disease, including the breeding of plants more adapted to challenging environments and the discovery of new medicines, explains biochemist Noel, holder of the Arthur and Julie Woodrow Chair.

“It is essential to understand what steps bodies, plant or animal, take to construct and process chemical information in order to produce more food and treat metabolic diseases,” he says.

Chory, Noel and Salk post-doctoral researchers Zuyu Zheng and Yongxia Guo, co-first authors on the paper, made their discovery by studying thale cress (Arabidopsis thaliana), a small plant with tiny white flowers that grows wild throughout much of the world. Thale cress has become a profoundly important research model to scientists studying genetics and metabolism, because it grows to maturity in only six weeks and its genes can be quickly tested for what instructions they give the plant. This allows researchers to rapidly learn what genes regulate the production of proteins and enzymes essential to metabolism. This basic information can then translate into better crop plants and disease treatments.

When the top of a plant is shaded, two different parts of the plant quickly adjust their growth rate so the plant can compete for sunlight. The stem or trunk of the plant will rapidly grow longer, often in only a few hours, in an attempt to avoid being trapped in shade. Another part, the tissue known as the “petiole,” which connects a leaf to the stem, also elongates as it reaches for the sun. Together, these two organs allow the plant to more efficiently carry out photosynthesis, which turns light and carbon dioxide into life sustaining food.

The growth of the two parts is controlled by two different metabolic pathways that make two very distinct chemical hormones. Stem growth is triggered by the hormone auxin, while petiole growth is stimulated by the hormone ethylene. Our own bodies use hormones in similar growth pathways, which follow the same complicated metabolic rules.

Zheng and Guo discovered that there is an enzyme, called VAS1, that functions as a canal between the auxin and ethylene pathways. Like the Panama Canal, VAS1 isn’t merely a shortcut between two pathways, but a gating mechanism that regulates these two different hormone levels simultaneously, ensuring that different parts of the plant grow in a balanced way and not wildly out of control. With VAS1 in place as a gate, there’s no need to wait for genes to turn on and off to make these hormones in a coordinated manner.

These tiny plants have given us a new way of thinking about coordinating metabolism in all species, says Chory. “Evolution is conservative,” she explains, “If you find a mechanism in one system, the likelihood is high that you will quickly find it throughout all of nature.”

Noel agrees, adding, “We’ve shown that there needs to be serious re-thinking of the conventional wisdom of how metabolic process are synchronized and how this synchronization fails in disease.”

The work was supported by the Howard Hughes Medical Institute, the National Institutes of Health, the National Science Foundation, the Internal Grant Agency of Palacky University in the Czech Republic, the Grant Agency of the Academy of Sciences of the Czech Republic, the Swedish Governmental Agency for Innovation Systems and the Swedish Research Council.

Coordination of auxin and ethylene biosynthesis by the aminotransferase VAS1