La Jolla—Birds do it, bees do it, and for most things biological, even plants do it. But not necessarily like their animal counterparts. A study led by Salk Institute scientists shows that a plant receptor does one of the most fundamental cellular “its”—the delivery of a hormonal signal from outside the cell to the nucleus—in a radically different way than its animal cousins. Knowing that could aid creation of techniques to speed plant growth and enhance agricultural production.

In a study published in the June 12, 2011, advance online edition of the journal Nature, a team led by Joanne Chory, Ph.D., professor and director of the Plant Molecular and Cellular Biology Laboratory and a Howard Hughes Medical Institute investigator, reports the three-dimensional structure of a plant steroid hormone receptor known as BRI1. 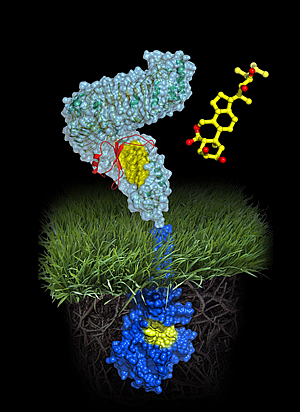 A molecule of brassinolide (yellow wire model) binds to the extracellular domain of the receptor (in light-blue). Binding ultimately causes phosphorylation of the receptor’s cytoplasmic kinase domain (in dark blue), thereby transducing the signal across the membrane.

Since the late 90’s the Chory lab has conducted landmark studies revealing that plant and animal steroids are made via similar pathways and that, like animals, plants use steroids to become bigger, regulate sexual development, and control physiology.

The new study caps that work with a molecular analysis of a receptor that transduces the plant steroid signal. “Our genetics studies previously showed that unlike animal steroid receptors, which bind steroids inside cells, plant steroid receptors are membrane proteins, a completely different class of protein,” says Chory, holder of the Howard H. and Maryam R. Newman Chair in Plant Biology. “Now that we know the precise contacts made between the steroid and its receptor, we can propose how the BRI1 receptor works.”

The new work reports the atomic structure of BRI1 and then superimposes it with a distant structural cousin, the mammalian membrane protein TLR3, which activates an innate immune response in mice and humans. The TLR3 structure was determined in 2005 by Ian Wilson, Ph.D., professor in the Department of Molecular Biology and member of the Skaggs Institute at The Scripps Research Institute (TSRI) and a co-author of the current study.

The comparison affirms that, although somewhat similar to TLRs architecturally, the domain of BRI1 that pokes out through the cell membrane and monitors the extracellular environment exhibits twists and turns unique to plants. “We thought BRI1 would look like TLR3, which is shaped like a horseshoe,” says Michael Hothorn, Ph.D., a postdoctoral fellow in the Chory lab and the study’s first author. “But instead BRI1 was twisted into a superhelical spiral.”

To visualize those twists, the group employed a technique called x-ray diffraction. That method requires that scientists first grow highly purified crystals of BRI1 extracellular “antenna”—in this case derived from the mustard plant Arabidopsis thaliana—and then bombard the crystals with x-rays. The way x-rays bounce off, or “diffract” from, the crystal enables researchers to construct a three-dimensional, Lego-like representation of the protein’s architecture in the presence or absence of steroid activator.

One prediction was that structural shifts caused by binding of the brassinolide steroid might resemble conformation changes made by TLR when it initiates an immune response. “We knew that when the TLR3 horseshoe binds an activator another horseshoe becomes glued on top of it,” says Hothorn. “But BRI1 contains an island domain that first binds steroid onto the twisted structure and then provides a platform for a different protein to interact and relay the signal.”

Although the job of proteins like TLR3 and BRI1 is to alter gene expression patterns in response to environmental stimuli, their structural differences likely reflect the fact that those stimuli are fundamentally different molecules. “In mammals TLR3 is an innate immunity receptor activated when large ligands such as viral RNA bind to a highly repeated area called the LRR or Leucine-Rich Repeat domain,” says Wilson. “BRI1 is also an LRR protein but its structure is highly specialized to recognize and respond to smaller plant steroid hormones.”

“Michael’s structural work is the final brick in the wall,” says Chory, noting that BRI1 serves as the prototype for a large class of similar proteins expressed in plants. Interestingly, BRI1 is an exception in that family: while its job is to relay growth-promoting signals, many of its look-alikes actually stimulate immune responses in plants, protecting them from insects, worms or bacteria. Whether BRI1’s sibling receptors display such a twisted structure opens new avenue of investigation.

Many common herbicides were designed to mimic the structure of plant hormones. “Because brassinosteroids are hormones, knowing the structure of their receptor will allow us to rationally design herbicides that could block interaction between hormone and receptor,” says Chory. “This would enable us to manipulate how fast plants grow and how large they become-traits that are important in crops that must soon feed 10 billion people.”

Also contributing to the work were Youssef Belkhadir and Tsegaye Dabi of the Chory lab, Joseph Noel of Salk, and Marlene Dreux of The Scripps Research Institute in La Jolla.