Perfect vision but blind to light

Perfect vision but blind to light

La Jolla, CA – Mammals have two types of light-sensitive detectors in the retina. Known as rod and cone cells, they are both necessary to picture their environment. However, researchers at the Salk Institute for Biological Studies have found that eliminating a third sensor – cells expressing a photopigment called melanopsin that measures the intensity of incoming light – makes the circadian clock blind to light, yet leaves normal vision intact.

“It is entirely possible that in many older people a loss of this light sensor is not associated with a loss of vision, but instead may lead to difficulty falling asleep at the right time,” says Satchidananda Panda, Ph.D., an assistant professor in the Regulatory Biology Laboratory, who led the study. 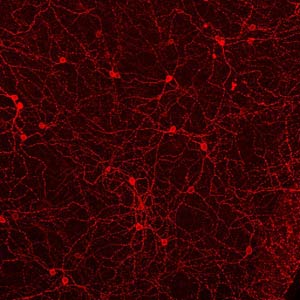 Caption: When light activates melanopsin (red), a light receptor found in rare, specialized cells in the retina, they send a signal to different areas in
the brain. It allows the body to tell day from night and adjust accordingly.

Understanding how melanopsin does its job may one day allow scientists to reset the body’s biological clock with a pill to alleviate symptoms associated with jet lag, shifts in work schedules, seasonal changes in day lengths and disorders such as insomnia and depression, the researchers say. Their findings are published in the June 11, 2008 issue of the PLoS ONE.

Visual processing begins when photons entering the eye strike one or more of the 125 million light-sensitive nerve cells in the retina at the back of each eye. Rod cells use rhodopsin to pick up dim light, while cone cells rely on related photopigments to discriminate color. This first and outermost layer of cells converts the information into electrical signals and sends them to an intermediate layer, which in turn relays signals to the optic nerve. Melanopsin is different from the classical rod and cone opsins, which help us see.

“It functions like a light meter in a camera, but does more than set our biological clock,” explains Panda. “The incoming information about light intensity is also used to adjust the aperture or pupil size, regulate melatonin synthesis and physical activity.”

Unlike the millions of rod and cone cells imparting vision, melanopsin is only present in roughly 2,000 cells, which are known as melanopsin-expressing retinal ganglion cells or mRGCs. Embedded in the inner retina, these spidery cells signal directly to the human circadian clock, a cluster of cells less than half the size of a pencil eraser, which sits just above the point where the optic nerves cross.

Through these signals, the clock synchronizes the body’s daily rhythms with the rising and setting of the sun. It tells the body when it’s time to go to sleep, when to be hungry, when to wake up and makes us feel completely out of sync when we cross several time zones.

While it had been known that blind mice without functional rods and cones can still use mRGCs to adjust their biological clock, the aperture of their pupils and light-dependent activity – collectively known as non-image forming visual responses – mice without melanopsin were not completely blind to light.

Since mice developing without melanopsin might compensate during their development for the lack of incoming information about light intensity, resulting in muddled results, postdoctoral researcher and first author Megumi Hatori, Ph.D., developed a system that allowed her to specifically and efficiently shut down all melanopsin-expressing cells while leaving the retina intact.

She genetically engineered mice to render their mRGCs susceptible to diptheria toxin, which she exploited to kill melanopsin-expressing cells at eight weeks of age. “We found that killing the melanopsin-expressing cells makes the mouse circadian clock completely blind to light,” says Hatori, “but these mice can still perform normal image-forming visual tasks perfectly fine.”

The mammalian time keeping system relies on information from melanopsin – and to a lesser extent from rods and cones – to collect information about light intensity. The Salk researchers experiments pinpointed mRGCs as the location where all the incoming information about the brightness of ambient light is integrated and forwarded to the circadian clock.

“Since all the information passes through mRGCs, these cells have emerged as a unique cellular target for therapeutic intervention in circadian clock related disorders,” says Panda, who has started screening small molecules for their ability to tweak melanopsin’s light sensing properties and thereby slowing down or enhancing the resetting of our biological clock.