Patients' own cells yield new insights into the biology of schizophrenia

Patients’ own cells yield new insights into the biology of schizophrenia

LA JOLLA, CA—After a century of studying the causes of schizophrenia-the most persistent disabling condition among adults-the cause of the disorder remains unknown. Now induced pluripotent stem cells (iPSCs) generated from schizophrenic patients have brought researchers from the Salk Institute for Biological Studies a step closer to a fundamental understanding of the biological underpinnings of the disease.

In their study, published in the April 13, 2011 advance online issue of the journal Nature, the Salk team reports both that neurons generated from these patient-derived iPSCs made fewer connections with each other, and that Loxapine, an antipsychotic drug commonly used to treat schizophrenia, restored neuronal connectivity in iPSC neurons from all patients.

“This is the first time that a complex mental disease has been modeled in live human cells,” says lead author Fred Gage, Ph.D., a professor in the Salk’s Laboratory of Genetics and holder of the Vi and John Adler Chair for Research on Age-Related Neurodegenerative Diseases. “This model not only affords us the opportunity to look at live neurons from schizophrenia patients and healthy individuals to understand more about the disease mechanism, but also to screen for drugs that may be effective in reversing it.”

Schizophrenia, which is defined by a combination of paranoid delusions, auditory hallucinations and diminished cognitive function, afflicts one percent of the population worldwide, corresponding to nearly three million people in the United States alone. Accumulating genomic evidence indicates that many different combinations of genetic lesions-some of them affecting the susceptibility to environmental influences-may lead to a variety of signs and symptoms collectively labeled schizophrenia. 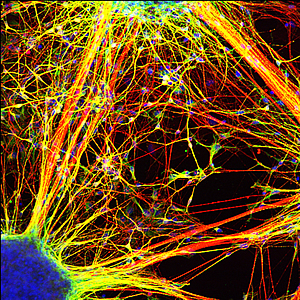 “Schizophrenia exemplifies many of the research challenges posed by complex psychiatric disorders,” says Gage. “Without a basic understanding of the causes and the pathophysiology of the disorder, we lack the tools to develop effective treatments or take preventive measures.”

Trying to overcome the limitations of the past, such as limited accessibility of human neurons and the difficulty of separating genetic and environmental influences, postdoctoral researcher and first author, Kristen Brennand, reprogrammed into iPSCs skin fibroblasts from four schizophrenia patients with a hereditary history of the disease. She then differentiated these cells into neurons.

“Nobody knows how much the environment contributes to the disease,” she explains. “By growing neurons in a dish, we can take the environment out of the equation, and start focusing on the underlying biological problems.”

But it wasn’t till Brennand used a modified rabies virus, developed by Salk professors Edward Callaway and John Young, to highlight the connections between neurons that she was able to detect differences between normal neurons and neurons originating from schizophrenia patients. “It was really reassuring that in most ways, these ‘schizophrenic’ neurons are in fact indistinguishable from normal ones,” she says.

The viral tracer made it apparent that the schizophrenic neurons connected less frequently with each other and had fewer projections growing out from their cell bodies. In addition, gene expression profiles identified almost 600 genes whose activity was misregulated in these neurons; 25 percent of those genes had been implicated in schizophrenia before.

Brennand then administered a number of frequently prescribed antipsychotic medications for the final three weeks of neuronal differentiation to test their ability to improve connectivity in vitro. Only Loxapine, which like all other currently FDA-approved schizophrenia medications acts on dopamine receptors in the brain, increased neurons’ ability to reach out and connect with their neighbors. It also affected the activity of hundreds of genes.

“These drugs are doing a lot more than we thought they were doing,” explains Brennand. “But now, for the very first time, we have a model system that allows us to study how antipsychotic drugs work in live, genetically identical neurons from patients with known clinical outcomes, and we can start correlating pharmacological effects with symptoms.”

“For many years, mental illness has been thought of as a social or environmental disease, and many thought that if affected people just worked through their problems, they could overcome them,” says Gage. “What we are showing are real biological dysfunctions in neurons that are independent of the environment.”

The work was funded in part by the California Institute for Regenerative Medicine, the Lookout Foundation, Mathers Foundation, Helmsley Foundation and Sanofi-Aventis.