Origins of multicellularity: All in the family

Home - Salk News - Origins of multicellularity: All in the family

Origins of multicellularity: All in the family

LA JOLLA, CA-One of the most pivotal steps in evolution-the transition from unicellular to multicellular organisms-may not have required as much retooling as commonly believed, found a globe-spanning collaboration of scientists led by researchers at the Salk Institute for Biological Studies and the US Department of Energy’s Joint Genome Institute.

A comparison of the genomes of the multicellular algae Volvox carteri and its closest unicellular relative Chlamydomonas reinhardtii revealed that multicellular organisms may have been able to build their more complex molecular machinery largely from the same list of parts that was already available to their unicellular ancestors. 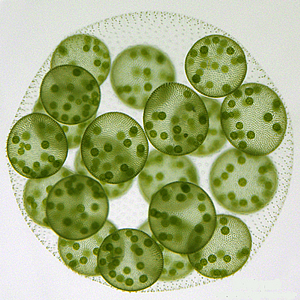 “If you think of proteins in terms of lego bricks Chlamydomonas already had a great lego set,” says James Umen, Ph.D., assistant professor in the Plant Molecular and Cellular Biology Laboratory at the Salk Institute. “Volvox didn’t have to buy a new one, and instead could experiment with what it had inherited from its ancestor.”

Altogether the findings, published in this week’s edition of the journal Science , suggest that very limited protein-coding innovation occurred in the Volvox lineage. “We expected that there would be some major differences in genome size, number of genes, or gene families sizes between Volvox and Chlamydomonas,” says Umen. “Mostly that turned out not to be the case.”

The evolution of multicellularity occurred repeatedly and independently in diverse lineages including animals, plants, fungi, as well as green and red algae. “This transition is one of the great evolutionary events that shaped life on earth,” says co-first author Simon E. Prochnik, Ph.D., a Computationial Scientist at the DOE Joint Genome Institute. “It has generated much thought and speculation about what makes multicellular organisms different or more complex than their unicellular ancestors.”

In most cases the switch from a solitary existence to a communal one happened so long ago-over 500 million years-that the genetic changes enabling it are very difficult to trace. An interesting exception to the rule are volvocine green algae. For them, the transition to multicellularity happened in a series of small, potentially adaptive changes, and the progressive increase in morphological and developmental complexity can still be seen in contemporary members of the group (see slide show).

Volvox, the most sophisticated member of the lineage, is believed to have evolved from a Chlamydomonas-like ancestor within the last 200 million years, making the two living organisms an appealing model to study the evolutionary changes that brought about multicellularity and cellular differentiation.

To gather data for the comparative genomic analysis, the researchers sequenced the 138 million base pair Volvox genome using a whole genome shotgun strategy. The genome itself is 17% larger than the previously sequenced genome of Chlamydomonas and the sequence divergence between the two is comparable to that between human and chicken.

Despite the modest increase in genome size, the number of predicted proteins turned out to be very similar for the two organisms (14,566 in Volvox vs. 14,516 in Chlamydomonas) and no significant differences could be identified in the repertoires of protein domains or domain combinations. Protein domains are parts of proteins that can evolve, function, and exist independently of the rest of the protein chain.

“This was somewhat unexpected,” explains Umen, “since innovation at the domain level was previously thought to play a role in the evolution of multicellularity in the plant and animal lineages.”

Additionally, Umen and his collaborators identified an increase in the number of cyclin D proteins in Volvox, which govern cell division and may be necessary to ensure the complex regulation of cell division during Volvox development. Last but not least, Volvox adapted a few of its existing genes to acquire novel functions. Members of the pherophorin family, for one, not only help build the extracellular matrix; some subtypes evolved into a diffusible hormonal trigger for sexual differentiation.