LA JOLLA, CA—Nuclear pores are the primary gatekeepers mediating communication between a cell’s nucleus and its cytoplasm. Recently these large multiprotein transport channels have also been shown to play an essential role in developmental gene regulation. Despite the critical role in nuclear function, however, nuclear pore complexes remain somewhat shadowy figures, with many details about their formation shrouded in mystery.

Now a team of investigators from the Salk Institute for Biological Studies has illuminated key differences in the mechanisms behind nuclear pores formed at two distinct stages in the cell cycle. Their findings, to be published in the June 12 issue of Cell, may provide insights into conditions such as cancer, developmental defects, and sudden cardiac arrest. 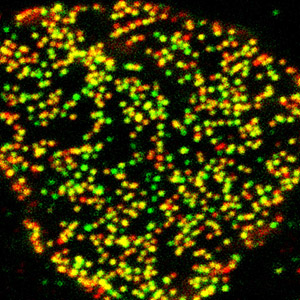 Nuclear pores, the all-important channels that control the flow of information in and out of a cell’s nucleus, assemble during interphase, and following mitosis, when the nuclear membrane reforms around the segregated chromosomes to create two identical nuclei. The image above shows fully assembled nuclear pores in red and early nuclear pore intermediates in green.

Nuclear pores, which are built from 30 different proteins, assemble during interphase, the period when the nucleus expands and replicates its DNA, and following mitosis, when the nuclear membrane reforms around the segregated chromosomes to create two identical nuclei.

But, explains Martin Hetzer, Ph.D., Hearst Endowment associate professor in Salk’s Molecular and Cell Biology Laboratory, who led the study, there has been a longstanding question about whether assembly pathways at the distinct cell cycle stages use different or similar mechanisms. “Interphase assembly is different from post-mitotic assembly in that the nuclear membrane is fully formed around chromatin,” he says, “whereas post-mitotic assembly occurs into the reforming nuclear membrane. So the topology of the nuclear membrane is very different during these two cell cycle stages.”

While some aspects of post-mitotic assembly were known, almost nothing was understood about how assembly of the pores occurs during interphase, when the cell doubles the number of nuclear pores to provide sufficient levels of NPC components for the two daughter cells. A parallel process takes place during differentiation of an oocyte, when millions of nuclear pore components are integrated into the nuclear membrane of the egg cell, so any findings about interphase assembly could also be relevant to embryonic development.

“We were able to show for the first time that there are two distinct mechanisms behind how these large protein complexes assemble to accommodate cell cycle-dependent differences in nuclear membrane topology,” says Hetzer.

The team identified a key difference in how the Nup107/160 complex, which is essential for NPC formation, is targeted to new assembly sites in the NE. Surprisingly, one of the complex members, Nup133, is directed to the pore assembly site via a completely novel mechanism that involves sensing of the nuclear membrane’s curvature. “The sensor was identified in a bioinformatics screen, and it was not known whether it was really functional in vivo,” says co-first author Christine Doucet, Ph.D., a postdoctoral fellow in Hetzer’s lab. “But we thought it would fit in with the topology of the nuclear membrane and the sites of the new nuclear pore complexes because they are highly curved. So if the sensor was playing a role in assembly, it was a really neat way to coordinate the assembly of all the components at the right position and the right time.”

The second difference the group discovered is that in post-mitotic assembly, but not during interphase, a protein called ELYS played a key role in directing the NUP107/160 complex, which is critical to the formation of pores, to the assembly sites. In contrast, the transmembrane Nup POM121, is specifically required for interphase assembly.POM121 is the earliest known protein at pore assembly sites yet how it is directed there is still under investigation.

“We knew both proteins were essential for pore assembly in different ways, but we didn’t know how,” says co-first author Jessica Talamas, also a postdoctoral fellow in Hetzer’s lab. “There was a discrepancy in the literature about POM121, so we were trying to figure out what was going on. It was one of those lightbulb moments, we were looking at the data and realized that POM121 was only required for interphase assembly, and then everything just made sense.”

Because these processes are at work in every cell that divides, the study is especially germane to one of the big questions in the field: how the number of nuclear pores is regulated. It’s a question with multiple ramifications. Nuclear pore numbers are misregulated in cancer cells, for example, so the findings have applications in cancer research. In addition, because neurons require a large number of nuclear pores, evidence is mounting that defects in nuclear pore assembly are linked to developmental defects in the central nervous system. Assembly defects during development have also been implicated in conditions such as sudden cardiac arrest.

“In establishing differences between the two assembly pathways, the findings have provided the first glimpse of a mechanistic understanding,” Hetzer says.

This study was supported by a grant from the National Institutes of Health.