LA JOLLA, CA—Nuclear pore complexes are best known as the communication channels that regulate the passage of all molecules to and from a cell’s nucleus. Researchers at the Salk Institute for Biological Studies, however, have shown that some of the pores’ constituent proteins, called nucleoporins, pull double duty as transcription factors regulating the activity of genes active during early development.

This is the first time nucleoporins’ gene regulatory function has been demonstrated in multicellular organisms, and these findings, reported in the Feb. 5, 2010 issue of Cell, not only reveal a new class of transcription factors but may offer new insights into the mechanisms behind cancer. 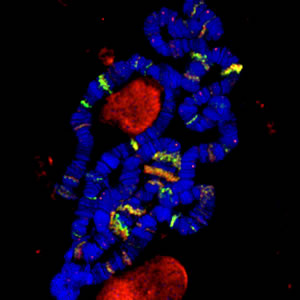 “Nuclear pores are not only transport channels but play a role in the organization of the genome and a very direct role in gene expression,” says senior author Martin Hetzer, Ph.D., Hearst Endowment associate professor in Salk’s Molecular and Cell Biology Laboratory. “NPC components, called nucleoporins, are also present in the nuclear interior and bind to certain genes, which puts them in a new class of gene regulators.”

Despite evidence in yeast that nuclear pores are required for expression of certain genes, it was unknown how the connection worked. Since nuclear pore complexes are part of the nuclear membrane, which delineates the cell nucleus, it had been assumed that when a gene was regulated by a nucleoporin, it somehow had to make its way to the periphery of the nucleus, adjacent to the nuclear pore.

It was also unknown whether similar regulatory properties were present in multicellular organisms. For more than a decade, however, scientists had known that when the protein called Nup98, a nucleoporin, abnormally fuses with certain proteins that regulate gene expression, the marriage causes leukemia. What is more, nucleoporins Nup214 and Nup88 are highly overexpressed in other cancers, including colon cancer and very aggressive forms of lung cancer. Scientists had long questioned why these components of the cell’s transport channel are implicated in cancer and had theorized that the connection might stem from a problem related to the conveyance of molecules in and out of the nucleus.

To probe the role of these proteins, Hetzer and his group studied the development of salivary glands in fruit flies. The chromosomes in Drosophila salivary glands are polytenized—meaning that they undergo multiple rounds of replication without cell division, resulting in giant chromosomes, which can be easily visualized by a light microscope. Using antibodies, Capelson and her collaborators were able to detect the binding of Nup98, SEC13, and FG-containing nucleoporins to specific genes on the polytene chromosomes. When they did a three-dimensional reconstruction of the nuclei, they found the nucleoporins inside the nucleus.

“Very few studies have looked at nuclear pore components for their potential role in gene regulation in animal cells,” says Hetzer. “The fact that NPC components can interact with genes inside the nucleus makes a lot more sense in how they can regulate gene activity. The gene doesn’t go to the pore; the pore protein goes to the gene.”

“There had been a longstanding mystery about nuclear pores and active genes,” adds first author Maya Capelson, Ph.D., a postdoctoral fellow in Hetzer’s lab. “The ability of the nuclear pore proteins to come off the pore and go inside the nucleus provides a global mechanism for the involvement of pores in gene regulation.”

The nucleoporins don’t regulate all genes, but are required for a subset of genes, including developmentally regulated genes, which are turned on and off in a controlled manner during cell differentiation and tissue development. “What is exciting to us is that they are key regulators for developmental genes and also potential markers for causes of cancer,” Hetzer explains.

This finding is significant in the context of Nup98’s relationship to leukemia when it fuses with other DNA binding proteins. Why Nup98’s translocation causes leukemia is unknown, but the discovery of Nup98 as bona fide transcription regulator has major implications for cancer and the cause of leukemia.

Previously, Hetzer’s lab had shown that nuclear pore components deteriorate during aging in post-mitotic cells. His team is now investigating whether age-dependent deterioration in long-lived cells, such as neurons and muscles, could also explain why certain genes are misregulated. Damage to those components, he suggests, may help explain why gene expression changes as we age—a phenomenon that is very well known but not understood. “Our hypothesis is that target genes may be misexpressed in aging cells,” he says.

This study was partly supported by grants from the National Institute of General Medical Sciences and the Damon Runyon Cancer Research Foundation. Researchers who also contributed to this study included Yun Liang, Roberta Schulte, William Mair of the Salk Institute and Ulrich Wagner from Bing Ren’s laboratory at UCSD.