LA JOLLA,CA—Dennis O’Leary of the Salk Institute was the first scientist to show that the basic functional architecture of the cortex, the largest part of the human brain, was genetically determined during development. But as it so often does in science, answering one question opened up many others. O’Leary wondered what if the layout of the cortex wasn’t fixed? What would happen if it were changed?

In the August issue of Nature Neuroscience, O’Leary, holder of the Vincent J. Coates Chair of Molecular Neurobiology at Salk, and Andreas Zembrzycki, a postdoctoral researcher in his lab, demonstrate that altering the cortical layout is possible, and that this alteration produces significant changes in parts of the brain that connect with the cortex and define its functional properties. These mechanisms may lay at the heart of neural developmental problems, such as autism spectrum disorders (ASD). 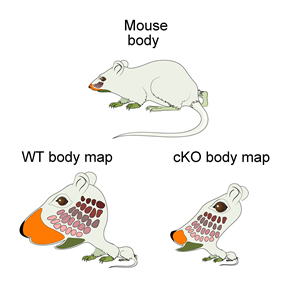 Like in Penfield’s “Homunculus” illustration, their size in S1 is dictated by the number and density of sense receptors and nerves that connect each body part with S1, rather than the size of the body part. A normal “Mouseunculus” (WT) contains highly enlarged maps representing the face and whiskers.

In animals lacking Pax6 in the neocortex (cKO), all body maps are very small and incomplete resulting in a highly distorted “Mouseunculus” that schematizes abnormal somatosensation in these mice.

The human cortex is involved in higher functions such as sensory perception, spatial reasoning, conscious thought and language. All mammals have areas in the cortex that process the senses, but they have them in different proportions. Mice, the favorite laboratory animal, are nocturnal, so they have a large somatosensory area (S1) in the cortex, responsible for somatosensation, or feelings of the body that include touch, pain, temperature and proprioception.

“The area layout of the cortex directly relates to the lifestyle of an animal,” says Zembrzycki. “Areas are bigger or smaller according to the functional needs of the animal, not the physical size of the body parts from which they receive input.”

Even with relative sizes to other species set in place, areas in the cortex of humans may differ greatly across individuals. Such variations may underlie why some people appear to be naturally better at certain perceptual tasks, such as hitting a baseball or detecting the details of visual illusions. In patients with neurological disorders, there is an even wider range of differences.

The neurons in S1 are arranged in functional groups called body maps according to the density of nerve endings in the skin; thus, there’s a larger group of neurons dedicated to the skin on the face, than the skin on the legs. Neurosurgeon Wilder Penfield famously illustrated this idea as a “sensory homunculus,” a cartoon of disproportionately sized body parts arching over the cortex. Mice have a similar “mouseunculus” in their cortex in which the body map of the facial whiskers is highly enlarged.

These perceptual maps are not set for life. For example, if innervation of a body part is diminished early in life during a critical period, its map may shrink, while other parts of the body map may grow in compensation. This is a version of “bottom-up plasticity,” in which external experience affects body maps in the brain. 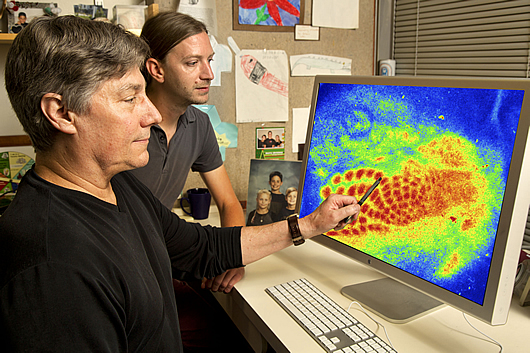 In order to study cortical layout, O’Leary’s team altered a regulatory gene, Pax6, in the cortex in mice. In response, S1 became much smaller, demonstrating that Pax6 regulates its development. They found that the shrinkage in S1 subsequently affected other regions of the brain that feed sensory information into the cortex, but more interestingly, it also altered the body maps in these subcortical brain regions, overturning the idea that once established, these brain regions could only be changed by external experience. They dubbed this previously unknown phenomenon “top down plasticity.”

Normally, the body map in S1 cortex mirrors similar body maps in the thalamus, the main switching station for sensory information, which transmits somatosensation from the body periphery to the S1 cortex through outgoing neural “wires” known as axons. In the newly discovered top-down plasticity, when S1 was made smaller, the sensory thalamus that feeds into it is also subsequently reduced in size.

But the story has a more intriguing twist. “According to our present knowledge about the development of sensory circuits, we anticipated that all body representations in S1 would be equally affected when S1 was made smaller,” says O’Leary. “It was a surprise to us that not only was the body map smaller, but some parts of it were completely missing. The specific deletion of parts of the body map is controlled by exaggerated competition for cortical resources dictated by S1 size and played out between the connections from thalamic neurons that form these maps in the cortex.”

“To put it in lay terms, ‘If you snooze, you lose,'” adds Zembrzycki. “Axons that differentiate later are preferentially excluded from the smaller S1 leading to the specific deletion of the body parts that they represent.”

“The essential point about top-down plasticity is that altering the size and patterning of sensory cortex results in matching alterations in sensory thalamus through the selective death of thalamic neurons that normally would represent body parts absent from S1,” Zembrzycki adds. “Therefore, a downstream part of the brain is repatterned to match the architecture in S1, resulting in aberrant wiring of the brain that has important implications for sensory perception and function. For example, autistics have very robust abnormalities in touching and other features of somatosensation.”

O’Leary and Zembrzycki believe that this process provides significant insights into the development of autism and other neural disorders. “One of the hallmarks of the autistic brain early in development is the area profile seems to be abnormal, with for example, the frontal cortex being enlarged, while the overall cortex keeps its normal size,” says O’Leary. “It is implicit then that other cortical areas positioned behind the frontal areas, such as S1, would be reduced in size, and thalamus would exhibit defects that match those in sensory cortex, as has been shown to be the case in autistic patients.”

Other researchers on the study were Shen-Ju Chou of the Salk Institute and Ruth Ashery-Padan and Anastassia Stoykova of the Max Planck Institute for Biophysical Chemistry, Goettingen, Germany.

This work was supported by the National Institutes of Health and the Vincent J.Coates Chair of Molecular Neurobiology.