Not all organs age alike

Not all organs age alike

LA JOLLA–Aging is typically thought of as the gradual decline of the whole body, but new research shows that age affects organs in strikingly different ways. A study published September 17, 2015 in Cell Systems provides the first comprehensive view of how cellular proteins age in different organs, revealing major differences between the liver and brain in young and old rats. The findings suggest that how an organ ages may depend on its unique cellular properties and its physiological function in the body.

“Our study showed that organs have different aging mechanisms and that aging is largely driven by changes in protein production and turnover,” says co-senior author Martin Hetzer, Salk professor and holder of the Jesse and Caryl Philips Foundation Chair.

“Changes that occur in aging can be diverse and difficult to pin down, and looking simply at one parameter might result in not seeing the whole picture,” says co-first author Brandon Toyama, Salk research associate. However, harnessing the power of several state-of-the-art technologies has let the group see age-dependent changes that could not be seen before. The result, according to Toyama, is “a rich resource that should stimulate the generation of new experimentally testable hypotheses, leading to a better understanding of aging on the organism level.” 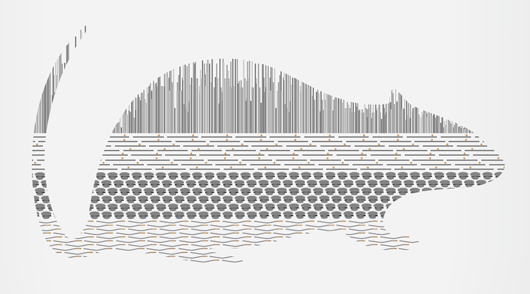 Scientists provide the first comprehensive view of how cellular proteins age in different organs, revealing major differences between the liver and brain in young and old rats.

Aging causes the progressive deterioration in the function of organs, as well as the functions of cells and proteins within them. Past studies have shown that the activity level of genes also changes with age, with most genes showing similar changes in expression across organs. However, a recent large-scale study showed that the vast majority of proteins across different organs don’t change in abundance during aging. These findings have left it unclear how aging affects cellular proteins and whether age-related changes that affect proteins differ across organs.

To answer these questions, Toyama and Hetzer, along with co-first author Alessandro Ori of the European Molecular Biology Laboratory (EMBL), and senior authors Nicholas Ingolia of the University of California, Berkeley and Martin Beck of EMBL took an integrated “omics” approach instead of focusing on one isolated aspect of gene expression as in past studies. The combination of genomics and proteomics allowed them to simultaneously analyze changes in transcription, translation, protein levels, alternative splicing and protein phosphorylation to gain a comprehensive and quantitative view of protein differences in the liver and brain of young and old rats.

They identified 468 differences in protein abundance between young and old animals, mainly due to changes in protein synthesis. Another set of 130 proteins showed age-related changes in their location within cells, phosphorylation state, or splice form–changes expected to affect the activity level or function of the proteins. “Our work significantly expands the list of proteins that are affected by chronological age in mammals,” Beck says. “In most cases, individual datasets would not have been sufficient to extrapolate these networks, highlighting the complexity of the effects of chronological age on the proteome and the benefits of our integrative approach.”

Strikingly, most of these age-related protein differences were specific to one organ. The protein aging patterns seem to relate to the organ’s specific cellular properties or function. Because cells in the liver are frequently replaced throughout adulthood, this organ has ample opportunity to replenish its proteins. By contrast, most neurons in the adult brain are non-dividing cells that must survive for an organism’s entire lifetime, so the longer-lived proteins in the brain are more vulnerable to the accumulation of damage and loss of function over time.

As a result, a larger fraction of proteins was affected by aging in the brain compared to the liver. In the brain, aging altered proteins involved in neuronal plasticity and memory formation, whereas several metabolic networks were altered in the liver. “Based on our findings, we would define aging as an organ-specific deterioration of the cellular proteome,” says Hetzer.

In future studies, the researchers will analyze other organs such as the heart to further examine the general and organ-specific effects of aging, and investigate how and why these changes occur. “We expect these organs to have specific aging signatures, like the brain and liver,” Hetzer says. “An interesting open question is whether one organ can affect the aging of another organ, that is, is aging sensed at the organismal level? Answering this question would give us a more comprehensive understanding of the aging process and how it relates to disease.”

The researchers will also study how aging differs across individuals to determine the role of genetic variability. “This research may shed new light on the molecular mechanisms underlying age-related diseases, enabling the identification of risk factors to predict which individuals are most susceptible based on their genetic makeup,” Beck says. “In the end, a better understanding of the molecular mechanisms of aging could lead to the development of novel therapies to prevent or treat a range of age-related diseases.”

This research was supported by the European Molecular Biology Laboratory, the Alexander von Humboldt Foundation, the Marie Skłodowska-Curie Actions, the Searle Scholars Program and the Paul F. Glenn Center for Aging Research.

About EMBL:
EMBL is Europe’s flagship laboratory for the life sciences, with more than 80 independent groups covering the spectrum of molecular biology. EMBL is international, innovative and interdisciplinary—its 1,600 employees, from many nations, operate across five sites: the main laboratory in Heidelberg, and outstations in Grenoble; Hamburg; Hinxton, near Cambridge (the European Bioinformatics Institute); and Monterotondo, near Rome. Founded in 1974, EMBL is an inter-governmental organisation funded by public research monies from its member states. The cornerstones of EMBL’s mission are: to perform basic research in molecular biology; to train scientists, students and visitors at all levels; to offer vital services to scientists in the member states; to develop new instruments and methods in the life sciences and actively engage in technology transfer activities, and to integrate European life science research. Around 230 students are enrolled in EMBL’s International PhD programme. Additionally, the Laboratory offers a platform for dialogue with the general public through various science communication activities such as lecture series, visitor programmes and the dissemination of scientific achievements.