LA JOLLA, CA—A multi-institutional team headed by Ursula Bellugi, professor and director of the Laboratory for Cognitive Neuroscience at the Salk Institute for Biological Studies, has been awarded a $5.5 million Program Project Grant by the National Institute of Child Health and Human Development (NICHD) to link social behavior to its underlying neurobiological and molecular genetic basis using Williams syndrome as a model.

“How the brain processes social information and integrates it with other forms of perception and learning is one of the major frontiers in neuroscience,” says Bellugi. “Using Williams syndrome as the basis for a new approach to social neuroscience is exciting and promising, in part because its genetic basis is clearly understood, and it is associated with a very specific pattern of cognitive strengths and weaknesses and some puzzling paradoxes.” 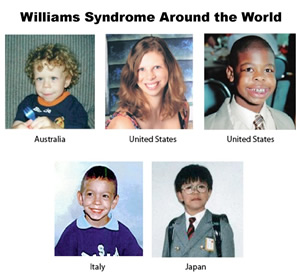 Although Williams syndrome is a clearly defined genetic disorder, the culture in which children grow up influences the expression their sociability.

Williams syndrome arises from a faulty recombination event during the development of sperm or egg cells. As a result, virtually everyone with Williams syndrome has exactly the same set of genes missing (25 to 28 genes are missing from one of two copies of chromosome 7). There also are rare cases of individuals who retain one or more genes that most people with the disorder have lost.

To children with Williams syndrome, people are much more comprehensible than inanimate objects. Despite myriad health problems and generally low IQs, they are extremely gregarious, irresistibly drawn to strangers, and insist on making eye contact. The children are confounded by the visual world around them, however: asked to draw a bicycle, they will show all the parts, but strew them randomly across the page. It is this strange mix of mental peaks and valleys that Bellugi and her collaborators hope will allow them to untangle the connections between genes and social behavior.

“Understanding the mechanisms and pathways underlying the organization of human social behavior is important in a wide variety of mental disorders,” says Bellugi. “By dissecting Williams syndrome, we hope to gain new insight into other neurodevelopmental disorders such as autism.”

The current grant is the latest chapter in a unique and exceptionally successful scientific alliance under the umbrella of a longstanding NICHD-funded Program Project, one of the first of its kind. Led by Bellugi, a team of researchers working in such disparate fields as social cognition, stem cell biology, neuronal architecture and neuroimaging are looking to Williams syndrome to provide clues to some of the mysteries of the genetic basis of social behavior.