La Jolla, CA – Like any new kid on the block that tries to fit in, newborn brain cells need to find their place within the existing network of neurons. The newcomers jump right into the fray and preferentially reach out to mature brain cells that are already well connected within the established circuitry, report scientists at the Salk Institute for Biological Studies in the online edition of Nature Neuroscience.

At first, they gingerly sniff out pre-existing connections between brain cells but as the new neurons mature over time they get emboldened and muscle out the old guys. “Adding new neurons could be a very problematic process if newborn cells would make connections all over the place,” explains Fred H. Gage, Ph.D., a professor in the Gene Expression Laboratory and the Vi and John Adler Chair for Research on Age-Related Neurodegenerative Diseases. “But if they are only replacing already existing connections there is less chance of error,” he adds. 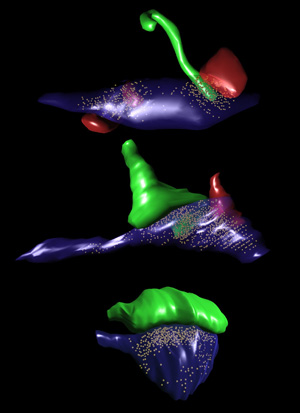 Top: Newborn neurons send out tiny dendritic protrusions (shown in green) that seek out pre-synaptic areas – the sending terminals of nerve cells (shown in purple) – that are already well connected within the established circuitry (shown in red).

Middle:Over time, the tip of the dendritic protrusions thickens, strengthening the connection between young and old.

Neurons make contact via specialized structures called synapses. As a signal traveling along a nerve branch arrives at the pre-synaptic area, it releases a chemical signal. The signaling molecules travel across the synapse and induce a signal on the neighboring, receiving nerve fiber or dendrite. A typical neuron sports about 7,000 synapses through which it stays in touch with roughly 1,000 other cells. But just how young neurons make their presence known and hook up with already well-connected elders has been unclear.

“If you have hopes that one day neuronal stem cells can replace damaged neurons in neurodegenerative diseases such as Alzheimer’s or Parkinson’s disease you have to ensure that these cells make proper connections, form functional synapses and integrate into the rest of the brain,” says postdoctoral fellow Nicolas Toni, Ph.D., who headed the current study.

To figure out how the newcomers do it, the Salk researchers injected a virus carrying the gene for green fluorescent protein into the hippocampus, a brain region harboring neural stem cells that give rise to new neurons. Newly born neurons infected with virus were marked by a fluorescent dye enabling the researchers to follow their fate over time as they tried to get accepted into the existing circuitry.

With the help of a whole arsenal of high-tech imaging technology and the electron tomography expertise of Mark. H. Ellisman, Ph.D., a professor at the National Center for Microscopy and Imaging Research at the University of California, San Diego, Toni then zoomed in at a nanometer scale and watched how the young and the old got acquainted.

He observed that between three and four weeks after injection of the virus newborn neurons sent out dendritic filopodia – tiny feelers that probe the environment. “When we analyzed them in three dimensions, the tip of the filopodia was preferentially associated with synapses already connected to other neurons,” explains Toni.

However, as the new neurons matured, the tiny tips filled out and started to monopolize the synaptic connections. “That’s what we believe is the crux of the study: the survival of new neurons may depend on the ability to compete out the older existing neurons,” says Gage. Earlier studies had shown that if young neurons fail to receive signals from other brain cells they wither and die. By connecting to functional synapses, the newborn neurons ensure that they are not reaching out to deadbeats.

The Gage lab previously identified a subunit of the NMDA receptor, a protein complex that transduces signals sent by neighboring cells, as the newborn neurons’ life-saving equipment. The NMDA receptor is activated by the neurotransmitter glutamate, a chemical released by neurons in order to transmit information to neighboring cells. Whenever the receptor picks up a glutamate signal it is stimulated and relays the signal. For young neurons that signal means survival.

As a matter of fact, only about half of all newly born neurons manage to successfully integrate into the existing network of brain cells, at least in mice living in bare standard cages. Providing the mice with a stimulating, enriched environment – large cages filled with running wheels, colored tunnels and playmates – boost the number of neurons that manage to hook up with the existing network to 80 percent, reinforcing the observation that using one’s brain cells is the best way to optimize brain function throughout one’s lifetime.