La Jolla, CA–In a study that could have significant consequences for neural tissue transplantation strategies, researchers at the Salk Institute for Biological Studies report that inactivating a specific gene in adult neural stem cells makes nerve cells emerging from those precursors form connections in the wrong part of the adult brain.

In a paper published in the Nov. 11 issue of PLoS Biology, the team, led by Fred H. Gage, Ph.D., professor in the Laboratory of Genetics, discovered that a protein called cdk5 is necessary for both correct elaboration of highly branched and complex antennae, known as dendrites, which are extended by neurons, and the proper migration of cells bearing those antennae.

Previously described functions of cdk5 are manifold, among them neuronal migration and dendritic pathfinding of neurons born during embryonic development. “The surprising element was that the dendrites of newborn granule cells in the adult hippocampus lacking cdk5 stretched in the wrong direction and actually formed synapses with the wrong cells,” explains Gage. Synapses are the specialized contact points where dendrites receive input from the long processes, or axons, of neighboring neurons. 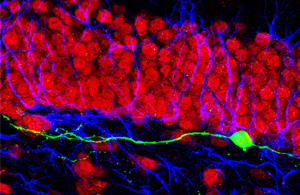 These findings offer extremely valuable, although unanticipated, input for investigators whose goal is to develop transplantation strategies to treat brain injuries or neurodegeneration.

“Our data shows that cells that fail to find their ‘right spot’ might actually become integrated into the brain and possibly interfere with normal information processing,” says the study’s lead author Sebastian Jessberger, M.D., a former postdoc in the Gage lab and now an assistant professor at the Swiss Federal Institute of Technology in Zurich, Switzerland.

Gage agrees that this is a possibility, noting that therapeutic targeting of new tissue—which would presumably be derived from stem cells—to the brain or spinal cord may demand extreme accuracy. “Our findings reflect the need for therapeutic approaches that will assure that cells used in regenerative medicine are strategically placed so that they will make appropriate rather than promiscuous connections.”

In the study investigators first injected retroviruses into part of the adult mouse brain known as the hippocampus, which is required for memory formation, to tag and knock out cdk5 activity in newborn granule cell neurons. Over time they observed that newborn neurons not only failed to move to their correct position in the brain but also sported stunted, mistargeted dendrites.

Jessberger explains that one might have predicted the opposite: that if immature neurons in the adult brain accidentally oriented their antennae in the wrong direction, they might fail to connect with cells in that network, or possibly even die. That they formed synaptic contact points was highly unanticipated. “We found that dendrites of cells lacking cdk5 seemed to integrate into the brain no matter what direction they grew in,” he says.

In fact, the inappropriate synaptic connections made by cdk5-deficient cells persisted for months after the treatment with cdk5-antagonizing retroviruses. “One might have predicted that aberrant maturing nerve cells would get kicked out of the circuitry later on,” reports Jessberger, who followed the behavior of newborn granule cells in treated mice long after cdk5 activity was eliminated. “Even after one year, some of those cells remained in the wrong part of the hippocampus.”

The PLoS Biology paper is part of an extensive body of work contributed by the Gage lab to the field of adult neurogenesis. A decade ago Gage became one of the first investigators in the world to demonstrate the emergence of new neurons in brains of adult mammals, including humans. The current study specifically extends a 2005 PNAS study in which the lab searched the whole genome for chromosomal hot spots associated with adult neurogenesis.

That study, which was initiated by former postdoctoral fellow Gerd Kempermann, M.D, a co-author on the PLoS Biology paper and currently professor at the Center for Regenerative Therapies in Dresden (CRTD), had identified a large region of mouse chromosome 5 as an area of interest, and cdk5 was a gene embedded within that locus.

“The nice part of this story is that it emerged from a systems genetics approach,” says Gage. “It continues our effort to apply genetic analysis to find chromosomal regions harboring genes that may play a critical role in neurogenesis.”

Also contributing to the study from the Gage lab were Stefan Aigner, Ph.D., Gregory D. Clemenson, Jr., Nicolas Toni, Ph.D., and D. Chichung Lie, M.D. Özlem Karalay of ETH and Rupert Overall of CRTD also were authors on the paper.

The study was supported by the Swiss National Science Foundation and the Deutsche Forschungsgemeinschaft and grants from the National Institutes of Health, the Lookout Fund, the Christopher and Dana Reeve Foundation, the Picower Foundation, the James S. McDonnell Foundation, and the Damon Runyon Cancer Research Foundation.

The Salk Institute for Biological Studies in La Jolla, California, is an independent nonprofit organization dedicated to fundamental discoveries in the life sciences, the improvement of human health, and the training of future generations of researchers. Jonas Salk, M.D., whose polio vaccine all but eradicated the crippling disease poliomyelitis in 1955, founded the Institute in 1960 with a gift of land from the City of San Diego and the financial support of the March of Dimes.