LA JOLLA, CA—Although the fact that we generate new brain cells throughout life is no longer disputed, their purpose has been the topic of much debate. Now, an international collaboration of researchers made a big leap forward in understanding what all these newborn neurons might actually do. Their study, published in the July 10, 2009, issue of the journal Science, illustrates how these young cells improve our ability to navigate our environment.

“We believe that new brain cells help us to distinguish between memories that are closely related in space,” says senior author Fred H. Gage, Ph.D., a professor in the Laboratory for Genetics at the Salk Institute and the Vi and John Adler Chair for Research on Age-Related Neurodegenerative Diseases, who co-directed the study with Timothy J. Bussey, Ph.D., a senior lecturer in the Department of Experimental Psychology at the University of Cambridge, UK, and Roger A. Barker, PhD., honorary consultant in Neurology at Addenbrookes Hospital and Lecturer at the University of Cambridge.

When the first clues emerged that adult human brains continually sprout new neurons, one of the central tenets of neuroscience-we are born with all the brain cells we’ll ever have-was about to be overturned. Although it is never easy to shift a paradigm, a decade later the question is no longer whether neurogenesis exists but rather what all these new cells are actually good for. 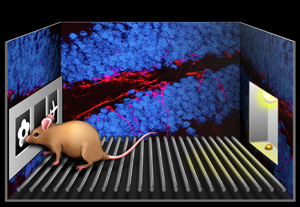 The image depicts a Paired Associates Learning (PAL) task, in which mice have to choose a specific object in its correct location on a touch screen to obtain a reward. Adult mice deficient in adult neurogenesis showed a specific impairment in pattern separation, identifying a dentate gyrus-specific function for newborn neurons in the adult brain. Adult born neurons are shown in red the background.

“Adding new neurons could be a very problematic process if they don’t integrate properly into the existing neural circuitry,” says Gage. “There must be a clear benefit to outweigh the potential risk.”

The most active area of neurogenesis lies within the hippocampus, a small seahorse-shaped area located deep within the brain. It processes and distributes memory to appropriate storage sections in the brain after readying the information for efficient recall. “Every day, we have countless experiences that involve time, emotion, intent, olfaction and many other dimensions,” says Gage. “All the information comes from the cortex and is channeled through the hippocampus. There, they are packaged together before they are passed back out to the cortex where they are stored.”

Previous studies by a number of laboratories including Gage’s had shown that new neurons somehow contribute to hippocampus-dependent learning and memory but the exact function remained unclear.

The dentate gyrus is the first relay station in the hippocampus for information coming from the cortex. While passing through, incoming signals are split up and distributed among 10 times as many cells. This process, called pattern separation, is thought to help the brain separate individual events that are part of incoming memories. “Since the dentate gyrus also happens to be the place where neurogenesis is occurring, we originally thought that adding new neurons could help with the pattern separation,” says Gage.

This hypothesis allowed graduate student Claire Clelland, who divided her time between the La Jolla and the Cambridge labs, to design experiments that would specifically challenge this function of the dentate gyrus using different behavioral tasks and two distinct strategies to selectively shut down neurogenesis in the dentate gyrus. 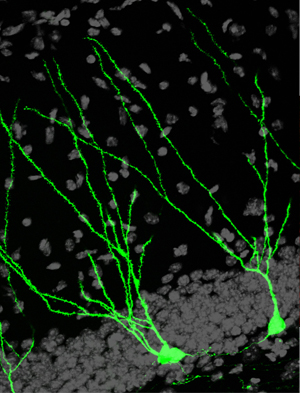 In the first set of experiments, mice had to learn the location of a food reward that was presented relative to the location of an earlier reward within an eight-armed radial maze. “Mice without neurogenesis had no trouble finding the new location as long as it was far enough from the original location,” says Clelland, “but couldn’t differentiate between the two when they were close to each other.”

A touch screen experiment confirmed the inability of neurogenesis-deficient mice to discriminate between locations in close proximity to each other but also revealed that these mice had no problem recalling spatial information in general. “Neurogenesis helps us to make finer distinctions and appears to play a very specific role in forming spatial memories,” says Clelland. Adds Gage, “There is value in knowing something about the relationship between separate events and the closer they get the more important this information becomes.”

But pattern separation might not be the only role that new neurons have in adult brain function: a computer model simulating the neuronal circuits in the dentate gyrus based on all available biological information suggested an additional function. “To our surprise, it turned out that newborn neurons actually form a link between individual elements of episodes occurring closely in time,” says Gage.

Given this, he and his team are now planning experiments to see whether new neurons are also critical for coding temporal or contextual relationships.

Researcher who also contributed to the work include M. Choi, A. Fragniere, and P. Tyers in the Centre for Brain Repair at the University of Cambridge, UK, C. Romberg and L. M Saksida in the Department of Experimental Psychology at the University of Cambridge, UK, graduate student G. Dane Clemenson Jr. in the Laboratory of Genetics at the Salk Institute for Biological Studies and assistant professor Sebastian Jessberger, M.D. at the Institute of Cell Biology at the Swiss Federal Institute of Technology in Zurich, Switzerland.