La Jolla, CA – During embryonic development, nerve cells hesitantly extend tentacle-like protrusions called axons that sniff their way through a labyrinth of attractive and repulsive chemical cues that guide them to their target.

While several recent studies discovered molecules that repel motor neuron axons from incorrect targets in the limb, scientists at the Salk Institute for Biological Studies have identified a molecule, known as FGF, that actively lures growing axons closer to the right destination. Their findings appear in the June 15 issue of Neuron. 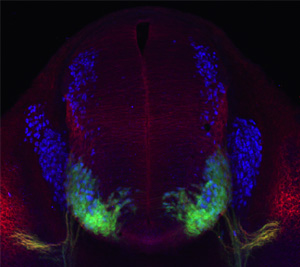 Spinal cord motor neurons (shown in green) extend tentacle-like protrusions called axons (shown in yellow) through a labyrinth of chemical cues that guide them to their correct destination during embryonic development. Cells that will develop into spine and neck muscles (shown in red) dispatch a growth factor to lure a specific subset of axons closer to their target. Other developing neurons are shown in blue.

“The most important aspect of our finding is not necessarily that we finally nailed the growth factor FGF as the molecule that guides a specific subgroup of motor neurons to connect to the muscles that line our spine and neck,” says senior author Samuel Pfaff, Ph.D., a professor in the Gene Expression Laboratory, “but that piece by piece, we are uncovering general principles that ensure that the developing nervous system establishes proper neuronal connections.”

Understanding how axons find their destinations may help restore movement in people following spinal cord injury, or those with motor neuron diseases such as Lou Gehrig’s disease, spinal muscle atrophy, and post-polio syndrome. Failure to establish proper connectivity in the brain may also underlie autism spectrum disorders and mental retardation.

“Our study emphasizes that the nervous system does not necessarily rely on an entirely new set of molecules to govern axon navigation, but instead uses growth factors already involved in embryonic development in clever and novel ways,” Pfaff says.

Skeletal muscle consists of thousands of muscle fibers, each controlled by one motor neuron whose cell body lies in the brain or spinal cord. Connections between muscle and nerve cells are established embryonically when newborn neurons extend axons to “wire” the appropriate muscle fiber.

The wiring process is highly orchestrated – each motor neuron has already pledged allegiance to a particular muscle fiber before it reaches out to connect with its predetermined partner. But until now, scientists could only speculate how the invisible bond was formed.

“The question was how do these motor neurons know where to go,” says Pfaff. “It would be a disaster if you wanted to move your arm and instead bent your back.”

Earlier studies suggested that muscles lining the spine sent out chemical cues as a siren song for specific motor neurons known as MMCm cells. But when attempts to identify the enticing substance failed, many started to doubt its existence.

After screening numerous candidates, the Pfaff team found not only that FGF is expressed in target muscle, but that FGF “sensors,” known as FGF receptors, are expressed in MMCm motor neurons. Furthermore, MMCm axons could not “hear” their muscle partner’s call and failed to reach their destination in mouse mutants lacking the sensor molecule.

Finally, using mice engineered to express a fluorescent protein in MMCm neurons, the investigators demonstrated that only the glowing neurons extended axons in the direction of target cells expressing FGF.

“After a lot of hard work, we narrowed it down to FGFs and showed that they were indeed the long sought-after mysterious substance,” says Pfaff.

Neural stem cells can now be coaxed to develop into motor neurons in a test tube. In that artificial environment, explains Pfaff, “Most external cues that guide immature motor neurons during embryonic development will be missing.” Hence the need to identify axon guidance factors. He continues, “It is not enough to make the right cell type, you need to connect them to the right target. Growth factors like FGF may be crucial to persuade and guide them towards the desired destination.”