New potential drug target for the treatment of atherosclerosis

New potential drug target for the treatment of atherosclerosis

La Jolla, CA – A nuclear receptor protein, known for controlling the ability of cells to burn fat, also exerts powerful anti-inflammatory effects in arteries, suppressing atherosclerosis in mice prone to developing the harmful plaques, according to new research by scientists at the Salk Institute for Biological Studies and the Harvard School of Public Health.

Their findings, reported in this week’s online edition of the Proceedings of the National Academy of Sciences, offer a new and specific target for the development of drugs that specifically treat cardiovascular complications associated with metabolic syndrome.

“Heart disease is like a ticking clock-it is progressive, relentlessly marching forward accelerated by a mix of high fat diets, inflammation and high blood pressure. We show that PPAR delta offers a kind of genetic shortcut around each of these medical roadblocks,” says Howard Hughes Medical Investigator Ronald M. Evans, Ph.D., a professor in the Salk Institute’s Gene Expression Laboratory, who co-directed the study with Chih-Hao Lee, a professor in the Department of Genetics and Complex Diseases at the Harvard School of Public Health. 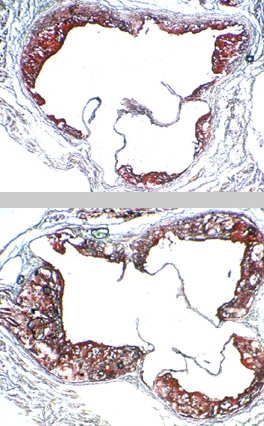 “Most people believe cholesterol plays a predominant role in atherosclerosis. Our study suggests that targeting inflammation at lesion sites is just as important,” adds Lee.

Like the Yin and Yang of fat metabolism, PPAR delta – the focus of the current study – and its counterpart PPAR gamma control the storage and burning of fat. PPAR gamma is in charge of storing surplus glucose as fat. When PPAR gamma is stimulated by a drug the body’s response to insulin improves, lowering levels of circulating glucose. Its sibling gene switch, PPAR delta, controls the ability of cells to burn fat. Activating PPAR delta revs up the fat-burning capacity of adipose tissue and muscle, dramatically lowers overall body weight, increases HDL (“the good cholesterol”), reduces circulating triglycerides, and improves hyperglycemia.

“Cardiovascular disease is a leading cause of death in patients with metabolic syndrome, a clustering of obesity-related disorders including insulin resistance, hypertension, and dyslipidemia,” says postdoctoral researcher and first author Grant D. Barish, M.D. “Since PPAR delta plays a key role in fat metabolism and PPAR delta drugs can protect against obesity, we wanted to know whether activating PPAR delta would protect against atherosclerosis.”

Atherosclerosis or “hardening of the arteries” is a chronic disease in which high cholesterol levels coupled with inflammation lead to the build-up of fatty deposits, called plaque, on the inner walls of arteries. Eventually these plaques can limit blood flow, leading to angina, or they may rupture, resulting in blood clots that block arteries and cause heart attacks or strokes.

When the researchers fed an experimental drug that turns on PPAR delta to genetically altered mice that develop the characteristic plaques at an early age, especially when placed on a high-fat diet, mice developed 25-30 percent fewer plaques. Further studies revealed that PPAR delta not only raises HDL levels but also suppresses the inflammatory response in the artery, dramatically slowing down lesion progression.

Barish and Evans also contributed to a related study, which was led by researchers at the University of California, Los Angeles and published in the same issue of PNAS. Using a different mouse model to mimic the development of atherosclerosis, the UCLA researchers detected an even more pronounced anti-inflammatory effect that slashed the number of aortic lesions by up to 70 percent.

While Barish, a clinically trained endocrinologist, cautions that extrapolating from mice to humans is inherently fraught with complications, he believes that drugs switching on PPAR delta have the potential to protect against obesity, insulin resistance and their associated cardiovascular risks.

“The discovery that any orally active compound can delay the progression of heart disease is rare, and considering the importance of the problem, we are hopeful that this work can be quickly carried into the clinic,” says Evans.