La Jolla, CA – Cells keep a close watch over the transcriptome – the totality of all parts of the genome that are expressed in any given cell at any given time. Researchers at the Salk Institute for Biological Studies and the University of Missouri-Kansas City teamed up to peel back another layer of transcriptional regulation and gain new insight into how genomes work.

Converting the “genetic blueprint” into molecular building blocks requires two basic processes: transcription, which copies the information from DNA into RNA transcripts and takes place in the cell’s nucleus, and translation, where the RNA serves as a template to manufacture proteins outside the nucleus. 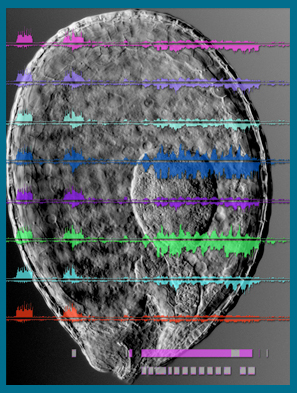 A genome-wide atlas of exosome substrates

The image shows a growth-arrested embryo from a mutant Arabidopsis plant that contains a genetic lesion in a gene encoding an essential part of the exosome. The embryo is overlaid on a genome browser image of tiling expression data from an intergenic region that exhibits strong upregulation of a cluster of novel tandem repeat-associated, exosome-regulated transcripts.

But before transcripts can guide protein synthesis or take on regulatory functions, they have to undergo a strict mRNA surveillance system that degrades defective, obsolete, and surplus transcripts. In their study, published in the Dec. 28 issue of Cell, the scientists zoomed in on a specific subclass of transcripts that are under the control of the exosome, a molecular machine in charge of controlled RNA degradation.

“We found evidence for widespread exosome-mediated RNA quality control in plants and a ‘deeply hidden’ layer of the transcriptome that is tightly regulated by exosome activity,” says Joseph R. Ecker, Ph.D., professor in the Plant Biology Laboratory and director of the Salk Institute Genomic Analysis Laboratory.

Since the exosome is in the business of chewing things up, the scientists inactivated the multi-unit complex to bring its otherwise invisible substrates to the fore. Then they combed the transcriptional landscape for hitherto unseen peaks of transcripts that now were untouched by the degrading force of the exosome complex and came up with a genome-wide atlas of Arabidopsis exosome targets.

“Our careful design and rigorous validation of the system for conditionally and quickly inactivating the exosome turned out to be really crucial for homing in on its RNA targets,” explains Dmitry A. Belostotsky of the University of Missouri-Kansas City. “On the other hand, genome-wide analyses of permanent genetic mutations often produce a complex mixture of direct and indirect effects, making it very hard to untangle. Thus, we think our strategy has a broadly-applicable value.”

“From a genomics perspective it really allowed us to visualize what information from the genome is actually expressed,” adds co-first author Brian D. Gregory, Ph.D., a postdoctoral researcher in Ecker’s lab. “When you knock down exosome activity, you see changes in the transcriptome that are not visible under any other circumstance.”

Since the common notion is that the exosome plays a central role in bulk RNA turnover, the researchers say, they expected to find the levels of all transcripts increasing when they inactivated the exosome complex. “But not everything is going up, instead the exosome mechanism seems to be very tightly regulated,” says Ecker. “We didn’t see regions that are known to be silenced to go up, instead we found a very specific group of transcripts that are regulated in this way.”

Among them are regular protein-coding RNAs, RNA processing intermediates and hundreds of non-coding RNAs, the vast majority of which hadn’t been described before. “These strange transcripts are associated with small RNA-producing loci as well as with repetitive sequence elements,” says Gregory. “They are under very tight regulation by the exosome, but we still don’t know exactly what this means.”

“It is likely that these RNAs that are usually ‘deeply hidden’ become important for genome function or stability under some circumstances”, adds co-first author Julia Chekanova, an assistant at the University of Missouri-Kansas City. “We need to do more work to figure out what these circumstances are.”