New gene discovered that stops the spread of deadly cancer

New gene discovered that stops the spread of deadly cancer

LA JOLLA—Scientists at the Salk Institute have identified a gene responsible for stopping the movement of cancer from the lungs to other parts of the body, indicating a new way to fight one of the world’s deadliest cancers.

By identifying the cause of this metastasis—which often happens quickly in lung cancer and results in a bleak survival rate—Salk scientists are able to explain why some tumors are more prone to spreading than others. The newly discovered pathway, detailed today in Molecular Cell, may also help researchers understand and treat the spread of melanoma and cervical cancers. 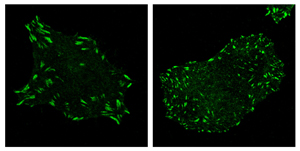 “Lung cancer, even when it’s discovered early, is often able to metastasize almost immediately and take hold throughout the body,” says Reuben J. Shaw, professor in Salk’s Molecular and Cell Biology Laboratory and a Howard Hughes Medical Institute early career scientist. “The reason behind why some tumors do that and others don’t has not been very well understood. Now, through this work, we are beginning to understand why some subsets of lung cancer are so invasive.”

Lung cancer, which also affects nonsmokers, is the leading cause of cancer-related deaths in the country (estimated to be nearly 160,000 this year). The United States spends more than $12 billion on lung cancer treatments, according to the National Cancer Institute. Nevertheless, the survival rate for lung cancer is dismal: 80 percent of patients die within five years of diagnosis largely due to the disease’s aggressive tendency to spread throughout the body.

To become mobile, cancer cells override cellular machinery that typically keeps cells rooted within their respective locations. Deviously, cancer can switch on and off molecular anchors protruding from the cell membrane (called focal adhesion complexes), preparing the cell for migration. This allows cancer cells to begin the processes to traverse the body through the bloodstream and take up residence in new organs.

In addition to different cancers being able to manipulate these anchors, it was also known that about a fifth of lung cancer cases are missing an anti-cancer gene called LKB1 (also known as STK11). Cancers missing LKB1 are often aggressive, rapidly spreading through the body. However, no one knew how LKB1 and focal adhesions were connected.

Now, the Salk team has found the connection and a new target for therapy: a little-known gene called DIXDC1. The researchers discovered that DIXDC1 receives instructions from LKB1 to go to focal adhesions and change their size and number.

When DIXDC1 is “turned on,” half a dozen or so focal adhesions grow large and sticky, anchoring cells to their spot. When DIXDC1 is blocked or inactivated, focal adhesions become small and numerous, resulting in hundreds of small “hands” that pull the cell forward in response to extracellular cues. That increased tendency to be mobile aids in the escape from, for example, the lungs and allows tumor cells to survive travel through the bloodstream and dock at organs throughout the body.

“The communication between LKB1 and DIXDC1 is responsible for a ‘stay-put’ signal in cells,” says first author and Ph.D. graduate student Jonathan Goodwin. “DIXDC1, which no one knew much about, turns out to be inhibited in cancer and metastasis.” 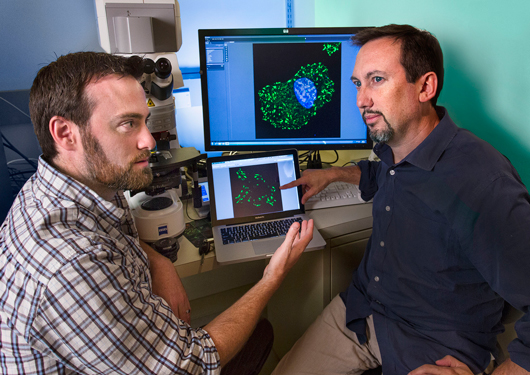 Tumors, Shaw and collaborators found in the new research, have two ways to turn off this “stay-put” signal. One is by inhibiting DIXDC1 directly. The other way is by deleting LKB1, which then never sends the signal to DIXDC1 to move to the focal adhesions to anchor the cell. Given this, the scientists wondered if reactivating DIXDC1 could halt a cancer’s metastasis. The team took metastatic cells, which had low levels of DIXDC1, and overexpressed the gene. The addition of DIXDC1 did indeed blunt the ability of these cells to be metastatic in vitro and in vivo.

“It was very, very surprising that this gene would be so powerful,” says Goodwin. “At the start of this study, we had no idea DIXDC1 would be involved in metastasis. There are dozens of proteins that LKB1 affects; for a single one to control so much of this phenotype was not expected.”

Right now, there is no specific treatment for cancers harboring LKB1 or DIXDC1 alterations, but those with a deletion of either gene would likely see results from cancer drugs that target the focal adhesions, says Shaw.

“The good news is that this finding predicts that patients missing either gene should be sensitive to new therapies targeting focal adhesion enzymes, which are currently being tested in early-stage clinical trials,” says Shaw, who is also a member of the Moores Cancer Center and an adjunct professor at the University of California, San Diego.

“By identifying this unexpected connection between DIXDC1 and LKB1 in certain tumors, we have expanded the potential patient population that may be good candidates for these therapies,” adds Goodwin.

The work was funded by: grants from the National Cancer Institute, the Howard Hughes Medical Institute, the Samuel Waxman Cancer Research Foundation, and the Leona M. and Harry B. Helmsley Charitable Trust.