LA JOLLA–As a tumor grows, its cancerous cells ramp up an energy-harvesting process to support its hasty development. This process, called autophagy, is normally used by a cell to recycle damaged organelles and proteins, but is also co-opted by cancer cells to meet their increased energy and metabolic demands.

“The finding opens the door to a new way to attack cancer,” says Reuben Shaw, a senior author of the paper, professor in the Molecular and Cell Biology Laboratory at the Salk Institute and a Howard Hughes Medical Institute Early Career Scientist. “The inhibitor will probably find the greatest utility in combination with targeted therapies.” 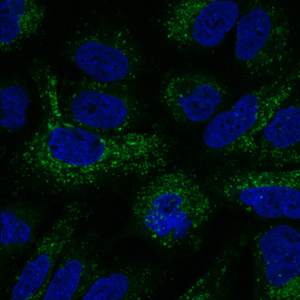 Cell recycling (shown in green) is elevated in lung cancer cells treated with an established cancer drug. Recycling is suppressed upon co-treatment with a newly discovered enzyme inhibitor.

Besides cancer, defects in autophagy have been linked with infectious diseases, neurodegeneration and heart problems. In a 2011 study in the journal Science, Shaw and his team discovered how cells starved of nutrients activate the key molecule that kicks off autophagy, an enzyme called ULK1.

Reasoning that inhibiting ULK1 might snuff out some types of cancer by stifling a main energy supply that comes from the recycling process, Shaw’s group and others wanted to find a drug that would inhibit the enzyme. Only a fraction of such inhibitors that show promise in a test tube end up working well in living cells. Shaw’s group spent more than a year studying how ULK1 works and developing new strategies for screening its function in cells.

A key breakthrough came when Shaw met the paper’s other senior author, Nicholas Cosford, a professor in the NCI-Designated Cancer Center at SBP. Cosford had been investigating ULK1 using medicinal chemistry and chemical biology, and had identified some promising lead compounds using rational design. The two labs combined efforts to screen hundreds of potential molecules for ULK1 inhibition, narrowing the list down to a few dozen, and eventually one.

“The key to success for this project came when we combined Reuben’s deep understanding of the fundamental biology of autophagy with our chemical expertise,” says Cosford. “This allowed us to find a drug that targeted ULK1 not just in a test tube but also in tumor cells. Another challenge was finding molecules that selectively targeted the ULK1 enzyme without affecting healthy cells. Our work provides the basis for a novel drug that will treat resistant cancer by cutting off a main tumor cell survival process.”

The result was a highly selective drug they named SBI-0206965, which successfully killed a number of cancer cell types, including human and mouse lung cancer cells and human brain cancer cells, some of which were previously shown to be particularly reliant on cellular recycling.

Interestingly, some cancer drugs (such as mTOR inhibitors) further activate cell recycling by shutting off the ability of those cells to take up nutrients, making them more reliant on recycling to provide all the building blocks cells need to stay alive. Rapamycin, for example, works by shutting down cell growth and division. In response, the cells launch into recycling mode by turning on ULK1, which may be one reason why, rather than dying, some cancer cells seem to go into a dormant state and return–often more drug resistant–after treatment stops. 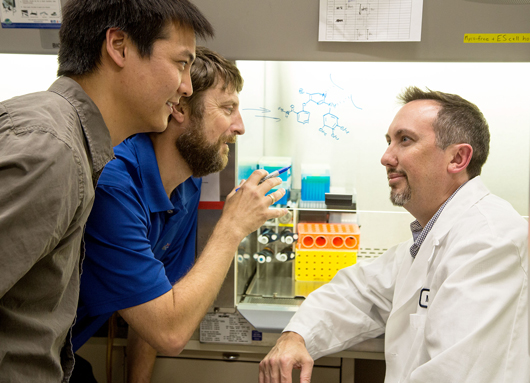 “Inhibiting ULK1 would eliminate this last-ditch survival mechanism in the cancer cells and could make existing anti-cancer treatments much more effective,” says Matthew Chun, one of the study’s lead authors and a postdoctoral fellow in the Shaw lab at Salk.

Drugging the autophagy pathway to combat cancer has been tried before, but the only drugs that currently block cell recycling work by targeting the cell organelle known as the lysosome, which functions at the final stage of autophagy. Although these lysosomal therapies are being tested in early-stage clinical trials, they inhibit other lysosomal functions beyond autophagy, and therefore may have additional side effects.

Comparing equivalent concentrations of the lysosomal drug chloroquine with SBI-0206965, in combination mTOR inhibitors, the scientists found that SBI-0206965 was better than chloroquine at killing cancer cells.

The group is now testing the drug in mouse models of cancer. “An important next step will be testing this drug in other types of cancer and with other therapeutic combinations,” says Shaw, who is deputy director of Salk’s NCI-Designated Cancer Center. “In the meantime, this discovery gives researchers an exciting new toolbox for the inhibition and measurement of cell recycling.”

Other authors on the study include co-lead author Daniel Egan of Salk’s Molecular and Cell Biology Laboratory; Mitchell Vamos, Haixia Zou, Juan Rong, Dhanya Raveendra-Panickar, Douglas Sheffler, and Peter Teriete of the Cell Death and Survival Networks Research Program in the NCI-Designated Cancer Center at SBP; Chad Miller, Hua Jane Lou, and Benjamin Turk of the Department of Pharmacology in Yale University School of Medicine; John Asara of the Division of Signal Transduction in Beth Israel Deaconess Medical Center and the Department of Medicine in Harvard Medical School; and Chih-Cheng Yang of SBP’s Functional Genomics Core.

The research was supported by National Institutes of Health, the Department of Defense, and the Leona M. and Harry B. Helmsley Charitable Trust.

About Sanford Burnham Prebys Medical Discovery Institute:
Sanford Burnham Prebys Medical Discovery Institute (SBP) is an independent nonprofit research organization that blends cutting-edge fundamental research with robust drug discovery to address unmet clinical needs in the areas of cancer, neuroscience, immunity, and metabolic disorders. The Institute invests in talent, technology, and partnerships to accelerate the translation of laboratory discoveries that will have the greatest impact on patients. Recognized for its world-class NCI-designated Cancer Center and the Conrad Prebys Center for Chemical Genomics, SBP employs more than 1,100 scientists and staff in San Diego (La Jolla), Calif., and Orlando (Lake Nona), Fla. For more information, visit us at SBPdiscovery.org. The Institute can also be found on Facebook at facebook.com/SBPdiscovery and on Twitter @SBPdiscovery.