La Jolla, CA – A stem cells’ immediate neighborhood, a specialized environment also known as the stem cell niche, provides crucial support needed for stem cell maintenance. But nothing lasts forever, found scientists at the Salk Institute for Biological Studies. During the aging process, the level of support drops off, diminishing the stem cells’ ability to replenish themselves (self-renew) indefinitely.

“The notion that the stem cell microenvironment is aging will certainly influence how we think about using stem cells in regenerative medicine,” says Leanne Jones, Ph.D., an assistant professor in the Laboratory of Genetics who led the study. “You can manipulate stem cells and propagate them in a dish, but many recipients of stem cell replacement therapies will be older individuals. If the stem cell niche has aged, it might not be capable of supporting the transplanted stem cells.” 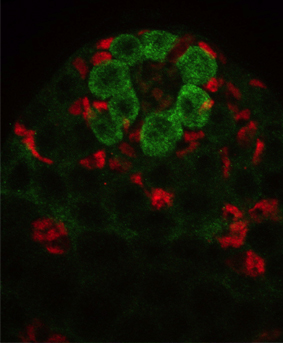 An immunofluorescence image of the tip of the Drosophila testis, showing male germline stem cells and their daughters (green) responding to self renewal signals from the stem cell niche. Somatic stem cells, known as cyst progenitor cells, and differentiating cyst cells are labeled in red.

In an article published in the Oct. 11, 2007 issue of Cell Stem Cell, the researchers show that in older flies a steep decline in the growth factor unpaired (upd), which is necessary to maintain stem cells, results in fewer stem cells in the testis of the fruit fly Drosophila. Identifying the reasons for reduced upd expression could reveal how aging leads to changes in stem cell behavior, and counteracting these changes may slow the loss of adult stem cells during aging.

Adult stem cells serve as a reservoir of cells for repair of damaged tissue throughout the life of an individual, but the maintenance and regeneration of tissues, such as skin, liver, blood and muscle, dramatically decrease with age. “Before we had embarked on our studies, we knew that tissue regeneration was affected by aging, but there really wasn’t a good system where all the niche components were known and you could ask, ‘so what is changing?’ ” noted senior research associate Monica Boyle, Ph.D., who co-authored the study with Chihunt Wong, a graduate student in the lab.

In the Drosophila testis, however, the whole system has been laid out, and stem cells can be readily identified – a major hurdle for most other types of stem cells. The stem cells sit at the tip of the testis surrounding a cluster of somatic cells called the apical hub. As a stem cell divides, one daughter cell, called a gonialblast, moves out of the niche in an orderly fashion to generate mature sperm cells. The daughter cell that stays put in the niche retains its stem cell identity.

In an earlier study, Jones had shown that the hub cells secrete the self-renewal factor upd, which signals neighboring stem cells to maintain stem cell fate, making hub cells an essential component of the stem cell niche. Artificially increasing the levels of upd,results in tumor-like masses of stem cells.

The current study focused on the influence of aging on the behavior of stem cells in the male germline. Boyle and Wong started by comparing the number of stem cells in young (1-2 days old), middle-aged (30 days old) and old (50 days old) flies. The average fruit fly lives around 40 days. Over time, stem cell numbers fell from an average of 8.3 in young flies to 5.1 in old flies, explaining the observed decrease in spermatogenesis in aged males.

The number of hub cells on the other hand remained unchanged, prompting the researchers to scrutinize the molecular signals that govern the behavior of stem cells in fruit flies. When they measured the levels of upd in the testes of aging males, they found a sharp decline in the well-known self-renewal factor. In contrast, forced expression of upd within niche cells delayed the loss of germline stem cells in older males.

“Taken together, our results suggest that over time the niche is changing to the point where you start losing self-renewing stem cells,” says Boyle. In fact, “compromised niche function may lead to the selection of stem cells that no longer depend on self-renewal factors produced by its environment. Such cells could be the precursors to cancer stem cells that contribute to tumorigenesis in a variety of tissues.”

“This is really the first description of a molecular factor that’s secreted by the niche and decreases over time,” says Wong. “This is an important step in our understanding of environmental influences on the aging process of stem cells.”

This work was funded by grants from the G. Harold and Leila Mathers Charitable Foundation, the Ellison Medical Foundation, the American Federation for Aging Research and the NIH.