LA JOLLA, CA—When it’s dark, and we start to fall asleep, most of us think we’re tired because our bodies need rest. Yet circadian rhythms affect our bodies not just on a global scale, but at the level of individual organs, and even genes.

Now, scientists at the Salk Institute have determined the specific genetic switches that sync liver activity to the circadian cycle. Their finding gives further insight into the mechanisms behind health-threatening conditions such as high blood sugar and high cholesterol.

“We know that genes in the liver turn on and off at different times of day and they’re involved in metabolizing substances such as fat and cholesterol,” says Satchidananda Panda, co-corresponding author on the paper and associate professor in Salk’s Regulatory Biology Laboratory. “To understand what turns those genes on or off, we had to find the switches.”

To their surprise, they discovered that among those switches was chromatin, the protein complex that tightly packages DNA in the cell nucleus. While chromatin is well known for the role it plays in controlling genes, it was not previously suspected of being affected by circadian cycles. 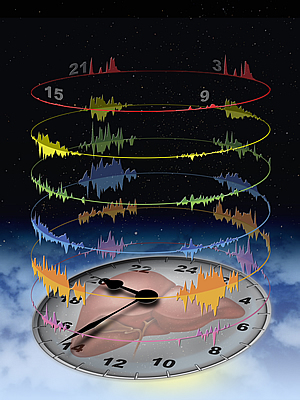 Thousand of epigenetic switches in the liver control whether genes turn on or off in response to circadian cycles. The figure illustrates daily changes, every six hours, in five different features of chromatin associated with the timed expression of a gene (red track on top).

Panda and his colleagues, including Joseph R. Ecker, holder of the Salk International Council Chair in Genetics, report their results December 5, 2012 in Cell Metabolism.

Over the last ten years, scientists have begun to discover more about the relationship between circadian cycles and metabolism. Circadian cycles affect nearly every living organism, including plants, bacteria, insects and human beings.

“It’s been known since the early eighteenth century that plants kept in darkness still open their leaves in 24 hour cycles. Similarly, human volunteers also maintain circadian rhythms in dark rooms. Now we’re determining the regulatory processes that control those responses,” says Ecker, who was recently elected a fellow of the American Association for the Advancement of Science for his work on the genetics of plant and human cells.

Panda offers an example of human circadian influenced behavior that is painfully familiar to all parents of newborns: Why do infants wake up in the middle of the night? It isn’t because they aren’t yet “trained” to a regular schedule, but because their internal circadian clocks haven’t even developed.

“Once the clock is developed, the infant can naturally sleep through the night,” Panda says. “On the other end of the scale, older people with dementia have sleep problems because their biological clock has degenerated.”

In the case of humans and other vertebrates, a brain structure called the suprachiasmatic nucleus controls circadian responses. But there are also clocks throughout the body, including our visceral organs, that tell specific genes when to make the workhorse proteins that enable basic functions in our bodies, such as producing glucose for energy.

In the liver, genes that control the metabolism of fat and cholesterol turn on and off in sync with these clocks. But genes do not switch on and off by themselves. Their activity is regulated by the “epigenome,” a set of molecules that signal to the genes how many proteins they should make, and, most importantly from the circadian point of view, when they should be made.

“We know that when we eat determines when a particular gene turns on or off, for example, if we eat only at nighttime, a gene that should be turned on during the day will turn on at night,” Panda says.

For this reason, the epigenome is of particular interest for health, since we can control when we eat. An earlier study from Panda’s lab, published last May in Cell Metabolism, suggested that we should observe a 16-hour fast between our evening and morning meals.

“In response to natural cycles, our body has evolved to make glucose at nighttime,” Panda says. “But if on top of that you eat, you’re creating excess glucose and that damages organs, which leads to diabetes. It’s like over-charging a car battery. Bad things will happen.”

In short, while we can’t control what genes we’re born with, we do have some influence over what they do. Nevertheless, the interplay between genome and epigenome is extremely complex. Panda, Ecker and their colleagues, including the paper’s co-first authors Salk postdoctoral researchers, Christopher Vollmers and Robert J. Schmitz, did their studies in mice. In the mouse liver, they discovered more than 3,000 epigenomic elements, which regulate the circadian cycles of 14,492 genes. Comparing the mouse genome to the human genome, they find many of the same genes.

“Now that we know where the switches are, it brings us one step closer to understanding the mechanism of gene regulation,” says Panda, “For example, it helps us restrict our search for other factors to particular regions of the genome. In other words, at least we now know to search in Alaska, rather than Australia. But Alaska’s still a big place.”

Other researchers on the study were: Jason Nathanson and Gene Yeo, of the University of California, San Diego

The work was supported by the Blasker Science and Technology Grant Award from the San Diego Foundation; the National Institutes of Health; the Mary K. Chapman Foundation; the Howard Hughes Medical Institute; the Gordon and Betty Moore Foundation; and the Pew Scholars Program in Biomedical Sciences.