Melanopsin looks on the bright side of life

Home - Salk News - Melanopsin looks on the bright side of life

Melanopsin looks on the bright side of life

LA JOLLA, CA—Better known as the light sensor that sets the body’s biological clock, melanopsin also plays an important role in vision: Via its messengers-so-called melanopsin-expressing retinal ganglion cells, or mRGCs-it forwards information about the brightness of incoming light directly to conventional visual centers in the brain, reports an international collaboration of scientists in this week’s issue of PLoS Biology.

The findings reveal a new role for mRGCs during image-forming vision and suggest that these cells could make a significant contribution to assessing the intensity of light and supporting vision even in people with advanced retinal degeneration, the researchers say. 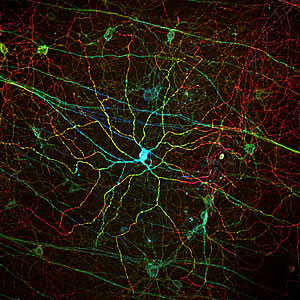 Melanopsin, a light receptor that measures the intensity of incoming light is found in rare, specialized cells embedded in the retina. The different colors corresponds to different depths of the imaged tissue sample.

“Millions of people worldwide suffer varying degrees of blindness because of rod and cone degeneration or dysfunction, but many of them can still perceive differences in brightness,” says senior author Satchidananda (Satchin) Panda, Ph.D., an assistant professor in the Regulatory Biology Laboratory at the Salk Institute for Biological Studies. “Melanopsin-expressing RGCs typically survive even complete rod and cone loss and could explain the light responses under these conditions,” he adds.

For the greater part of 100 years, it was thought that the ability to convert light into electrical signals in the mammalian retina was restricted to only two types of photoreceptors: rods and cones. This view changed dramatically when Panda discovered the existence of a third type of mammalian photoreceptor, which is only present in a few thousand cells embedded in the deeper layers of the retina.

Melanopsin, a photopigment that measures the intensity of incoming light, is fundamentally different from the classical rod and cone opsins, which help us see. For one, it is much less sensitive to light and has far less spatial resolution-characteristics that fit perfectly with this light sensor’s primary function of signaling changes in ambient light levels to the brain throughout the day. 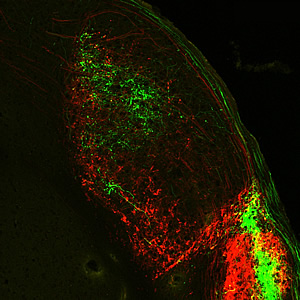 Melanopsin-expressing retinal ganglion cells extend their axons-long, slender projections that connect with other neurons-all the way to the primary processing center for visual information received from the brain.

It sends its signals directly to the human circadian clock, which sits just above the point where the optic nerves cross. Although only half the size of a pencil eraser, it synchronizes the body’s daily rhythms with the rising and setting of the sun, telling the body when it is time to go to sleep, when to be hungry and when to wake up. But it does more than that. Just like a meter in a camera that allows the aperture to be adjusted, mRGCs also control pupil size.

Until now, however, it was unknown whether mRGCs also contribute to conventional image-forming vision, especially the as-yet poorly understood mechanism of “brightness” and “lightness” perception.

To find out, Panda and his collaborators at the University of Manchester traced individual mRGCs’ axons-long, slender projections that connect with other neurons-from the retina through the circadian clock and onward. They discovered that the axons reached all the way to the LGN, short for lateral geniculate nucleus, the primary processing center for visual information received from the retina.

“We found widespread light responses in the LGN and visual cortex, even in mice lacking functional rods and cones, which are often used as a model of advanced retinal degeneration,” says Panda, who hopes that one day it might be possible to impart vision to blind individuals by gene therapy with a re-engineered melanopsin.

“The density of mRGCs in the retina is too low for any meaningful resolution,” he says. “But if we could express melanopsin in a greater number of cells, we might be able to increase resolution to a point that allows blind people to safely navigate their environment.”

The work was funded by grants from the Wellcome Trust, the National Institutes of Health, the Dana Foundation, a Pew Scholar award and the London Project to Cure Blindness.