LA JOLLA, CA—With their potential to treat a wide range of diseases and uncover fundamental processes that lead to those diseases, embryonic stem (ES) cells hold great promise for biomedical science. A number of hurdles, both scientific and non-scientific, however, have precluded scientists from reaching the holy grail of using these special cells to treat heart disease, diabetes, Alzheimer’s and other diseases.

In a paper published June 13 in Nature, scientists at the Salk Institute for Biological Studies report discovering that ES cells cycle in and out of a “magical state” in the early stages of embryo development, during which a battery of genes essential for cell potency (the ability of a generic cell to differentiate, or develop, into a cell with specialized functions) is activated. This unique condition, called totipotency, gives ES cells their unique ability to turn into any cell type in the body, thus making them attractive therapeutic targets. 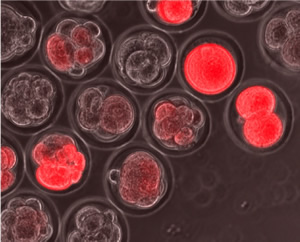 The Salk researchers found that embryonic stem cells cycle in and out of a state from which they can develop into any kind of tissue. Here, red fluorescent “reporter” molecules indicate that these early embryonic cells are exhibiting genetic activity indicative of this flexible state.

“These findings,” says senior author Samuel L. Pfaff, a professor in Salk’s Gene Expression Laboratory, “give new insight into the network of genes important to the developmental potential of cells. We’ve identified a mechanism that resets embryonic stem cells to a more youthful state, where they are more plastic and therefore potentially more useful in therapeutics against disease, injury and aging.”

ES cells are like silly putty that can be induced, under the right circumstances, to become specialized cells-for example, skin cells or pancreatic cells-in the body. In the initial stages of development, when an embryo contains as few as five to eight cells, the stem cells are totipotent and can develop into any cell type. After three to five days, the embryo develops into a ball of cells called a blastocyst. At this stage, the stem cells are pluripotent, meaning they can develop into almost any cell type. In order for cells to differentiate, specific genes within the cells must be turned on.

Pfaff and his colleagues performed RNA sequencing (a new technology derived from genome-sequencing to monitor what genes are active) on immature mouse egg cells, called oocytes, and two-cell-stage embryos to identify genes that are turned on just prior to and immediately following fertilization. Pfaff’s team discovered a sequence of genes tied to this privileged state of totipotency and noticed that the genes were activated by retroviruses adjacent to the stem cells.

Nearly 8 percent of the human genome is made up of ancient relics of viral infections that occurred in our ancestors, which have been passed from generation to generation but are unable to produce infections. Pfaff and his collaborators found that cells have used some of these viruses as a tool to regulate the on-off switches for their own genes. “Evolution has said, ‘We’ll make lemonade out of lemons, and use these viruses to our advantage,'” Pfaff says. Using the remains of ancient viruses to turn on hundreds of genes at a specific moment of time in early embryo development gives cells the ability to turn into any type of tissue in the body.

From their observations, the Salk scientists say these viruses are very tightly controlled-they don’t know why-and active only during a short window during embryonic development. The researchers identified ES cells in early embryogenesis and then further developed the embryos and cultured them in a laboratory dish. They found that a rare group of special ES cells activated the viral genes, distinguishing them from other ES cells in the dish. By using the retroviruses to their advantage, Pfaff says, these rare cells reverted to a more plastic, youthful state and thus had greater developmental potential.

Pfaff’s team also discovered that nearly all ES cells cycle in and out of this privileged form, a feature of ES cells that has been underappreciated by the scientific community, says first author Todd S. Macfarlan, a former postdoctoral researcher in Pfaff’s lab who recently accepted a faculty position at the Eunice Kennedy Shriver National Institute of Child Health and Human Development. “If this cycle is prevented from happening,” he says, “the full range of cell potential seems to be limited.”

It is too early to tell if this “magical state” is an opportune time to harvest ES cells for therapeutic purposes. But, Pfaff adds, by forcing cells into this privileged status, scientists might be able to identify genes to assist in expanding the types of tissue that can be produced.

“There’s tremendous hype over the practical applications of embryonic stem cells in clinical situations,” he says. “The struggle in labs throughout the world is that the smallest changes in environmental conditions could subtly and unpredictably have an effect on these cells. So, the more we know about the basic requirements needed for these cells to be able to generate a full range of tissue types, the better off we’ll be.” While the findings shed light on the basic biology of embryonic stem cells, Pfaff says there is still a “long way to go” in terms of their practical, clinical value.

The work was supported by the National Institute of Neurological Disorders and Stroke (R37NS037116), the Howard Hughes Medical Institute and the Marshall Heritage Foundation.