La Jolla, CA — Ever since insects developed a taste for vegetation, plants have faced the same dilemma: use limited resources to out-compete their neighbors for light to grow, or, invest directly in defense against hungry insects. Now, an international team of scientists at the Salk Institute for Biological Studies and the Institute of Investigaciones Fisiológicas y Ecológicas Vinculadas a la Agronomía (IFEVA) has discovered how plants weigh the tradeoffs and redirect their energies accordingly.

The same light sensor that detects other plants crowding in and gives the signal to switch on the synthesis of the plant growth hormone auxin reduces the plant’s responsiveness to the hormone jasmonic acid, which orchestrates the synthesis of a whole array of defensive chemicals, the researchers report in an article published in the current early online edition of the Proceedings of the National Academy of Sciences.

“Understanding how plants resolve the dilemma of resource allocation on a mechanistic level opens the possibility to increase the natural defenses of crops, especially in the high density plantings typical of modern agriculture, which depend on regular applications of insecticides,” explains senior author Carlos L. Ballaré, Ph.D., a senior scientist with CONICET (the National Research Council of Argentina) and associate professor at the University of Buenos Aires. 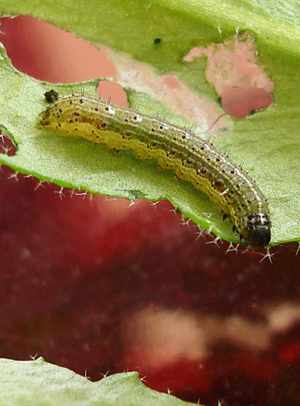 In an earlier study, Ballaré discovered that plants dial down their investment in defense when they perceive an increased risk of competition for light. But just how changes in light quality caused plants to drop their guards were still poorly understood. To connect the two, he turned to Howard Hughes Medical Institute investigator Joanne Chory, Ph.D., in the Plant Biology Laboratory at the Salk Institute and former lab member, Yi Tao, Ph.D., who had dissected the molecular pathway that plants use to adjust their growth and flowering time to shade.

Plants sense the presence of other plants in their neighborhood by the relative increase in incoming far-red light resulting from absorption of red light by canopy leaves and reflection of far-red light from neighboring plants. “When the major photoreceptor for shade avoidance detects neighbors, plants start producing the growth hormone auxin and transport it to their stems, where it helps plants grow taller,” explains Chory.

But plants also react to chemical cues in the oral secretions of herbivores and mechanical damage caused by caterpillars and their ilk nibbling on foliage. They increase the production of defense-related hormones, particularly jasmonic acid, which ramps up the concentration of chemicals that make plants unpalatable or at least less nutritious for herbivores.

“Such responses incur what is known as opportunity costs,” says Chory. “Resource allocation to competition can limit investment in defense, increasing vulnerability to herbivores, while allocation to defense can reduce competitive ability against neighboring plants.”

And that’s exactly what first author Javier E. Moreno, a graduate student in Ballaré’s lab, found. Fall armyworms—caterpillars that prefer to chomp on corn, sorghum and other members of the grass family but won’t say no to beans, potatoes, peanuts, cotton and other crops—grew twice as fast on Arabidopsis thaliana seedling grown under crowded conditions or exposed to far-red radiation, the light signal plants use to detect the proximity of neighbors. Like many commercially grown crops, Arabidopsis – the lab rat of plant biologists – doesn’t tolerate shade well.

But it was more than a matter of limited resources. Mutated Arabidopsis seedlings that no longer responded to far-red radiation but had normal levels of the far-red photoreceptor, still let their defenses down. At closer inspection, the researchers found that far-red radiation decreased the plants’ sensitivity to jasmonates. By ignoring jasmonate signals, the plants save resources because they no long invest in defense and, at the same time, avoid the growth-inhibitory effects of jasmonates.

“Without sufficient light to keep photosynthesis going, plants won’t have enough energy to invest in sophisticated defense strategies,” says Ballaré. “Coupling shade avoidance syndrome with the regulation of resource allocation to defense could provide a major selective advantage for plants growing in the wild, but might increase the vulnerability of densely planted crops to insects.”