Involuntary maybe, but certainly not random

Involuntary maybe, but certainly not random

LA Jolla, CA—Our eyes are in constant motion. Even when we attempt to stare straight at a stationary target, our eyes jump and jiggle imperceptibly. Although these unconscious flicks, also known as microsaccades, had long been considered mere “motor noise,” researchers at the Salk Institute for Biological Studies found that they are instead actively controlled by the same brain region that instructs our eyes to scan the lines in a newspaper or follow a moving object.

Their findings, published in the Feb. 13, 2009 issue of Science, provide new insights into the importance of these movements in generating normal vision.

“For several decades, scientists have debated the function, if any, of these fixational eye movements,” says Richard Krauzlis, Ph.D., an associate professor in the Salk Institute’s Systems Neurobiology Laboratory, who led the current study. “Our results show that the neural circuit for generating microsaccades is essentially the same as that for voluntary eye movements. This implies that they are caused by the minute fluctuations in how the brain represents where you want to look.” 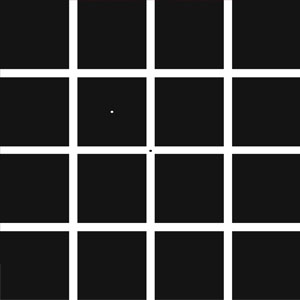 Your eyes on the move: When you stare at the central black dot for about a minute and then look at the white dot next to it, you will notice a dark afterimage of the white grid, which–as a result of your own fixational eye movements–keeps moving around. The existence of such involuntary eye movements has been known for several decades, but how the brain generates them has remained a scientific mystery.

“There was a lot of past effort to figure out what fixational eye movements contribute to our vision,” adds lead author Ziad Hafed, Ph.D., Sloan-Swartz Fellow in the Systems Neurobiology Laboratory, “but nobody had looked at the neural mechanism that generates these movements. Without such knowledge, one could only go so far in evaluating microsaccades’ significance and why they actually exist.”

Wondering whether the command center responsible for generating fixational eye movements resides within the same brain structure that is in charge of initiating and directing large voluntary eye movements, Hafed decided to measure neural activity in the superior colliculus before and during microsaccades.

The Salk researchers, in collaboration with Laurent Goffart, Ph.D., a professor at the Institut de Neurosciences Cognitives de la Méditerranée in Marseille, France, also temporarily inactivated a subset of superior colliculus neurons and analyzed the resulting changes in microsaccades. They discovered that a fully functional superior colliculus is required to generate normal microsaccades.

“Because images on the retina fade from view if they are perfectly stabilized, the active generation of fixational eye movements by the central nervous system allows these movements to constantly shift the scene ever so slightly, thus refreshing the images on our retina and preventing us from going ‘blind,'” explains Hafed. “When images begin to fade, the uncertainty about where to look increases the fluctuations in superior colliculus activity, triggering a microsaccade,” adds Krauzlis.

Microsaccades may, however, do more than prevent the world around us from fading when we stare at it for too long. Even when our gaze is fixed, our attention can shift to an object at the periphery that attracts our interest. In an earlier study, Hafed discovered that although we may avert our eyes from an attractive man or woman, microsaccades will reveal such objects of attraction because their direction is biased toward objects to which we are unconsciously attracted.