Insulin plays a role in mediating worms' perceptions and behaviors

Insulin plays a role in mediating worms’ perceptions and behaviors

LA JOLLA,CA—In the past few years, as imaging tools and techniques have improved, scientists have been working tirelessly to build a detailed map of neural connections in the human brain—with the ultimate hope of understanding how the mind works.

But determining how cells in the brain are physically connected is only the first clue for decoding our perceptions and behaviors. We also need to know the precise routes that information takes in the brain in a given context. Now, publishing their results September 8, 2013, in the journal Nature Neuroscience, researchers at the Salk Institute for Biological Studies have shown a striking example of the flexibility in neural circuitry and its influence on behaviors in worms, depending on the animals’ environment.

The roundworm Caenorhabditis elegans has exactly 302 neurons—far less than the estimated 100 billion neurons a person has—and we already know how each of them is connected. That, in addition to how easily the tiny creature’s cells can be manipulated, allows researchers to ask what sort of information passes through the circuits—in molecular-and circuit-level detail—and what are the behavioral consequences of this information flow. 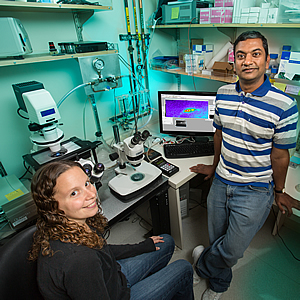 Even with a comprehensive map of the worm’s neuronal connections in hand, however, scientists still don’t know how the animal can interact with its environment in thousands of different ways. That’s one big question that Sreekanth Chalasani, an assistant professor in Salk’s Molecular Neurobiology Laboratory and Sarah Leinwand, a doctoral student at the University of California, San Diego, sought to answer.

In C. elegans, thanks to studies performed more than 20 years ago, many sensory neurons were identified to have distinct roles such as sensing temperature, pheromones, salt and odors. To know what these cells did, scientists had zapped them one-by-one with a laser and measured the worms’ behaviors. These studies implicated one neuron in the detection of increased salt in the worm’s surroundings.

In the new study, rather than ablating individual sensory neurons, Leinwand and Chalasani imaged worms that expressed genetically encoded calcium indicators in their neurons, which caused the cells to light up when active. Surprisingly, after exposure to an attractive but high concentration of salt, the worms’ olfactory sensory neuron lit up.

“We were extremely surprised to see that with these new tools, these new calcium sensors, we could discover that there was more than one type of neuron involved in processing sensory cues that people had thought were only sensed by single neurons,” says Leinwand. 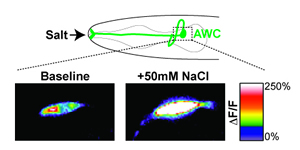 Top: An odor-sensing neuron (named AWC and shown in green) in the head of the worm was unexpectedly found to respond to salt in the environment.

Bottom: Higher magnification images of this neuron before (left) and during (right) salt presentation. The neuron expresses a calcium indicator that causes the neuron to light up (indicated by the white and warmer colors) when it is active; the salt exposure significantly lit up this neuron, which revealed the complexity of the worm’s sensory system.

Using additional genetic manipulations and behavioral assays, the researchers showed that the olfactory neuron—while still important for sensing odorants—was crucial for the worm’s movement toward salt within a certain concentration range. Unexpectedly, this neuron’s response to salt also required the previously identified salt-sensing neuron. In fact, the olfactory neuron was not directly sensing salt but instead was being activated by the salt sensory neuron, they found.

What information was the salt-sensing neuron sending to the olfactory neuron? Neurons communicate with each other by sending chemical and electrical signals through close contacts with their neighbors. By testing worms whose signaling molecules had been genetically knocked out, Chalasani and Leinwand could see which were playing a role in transmission when the worm was stimulated by higher salt. From these experiments, they saw that a neuropeptide, a small protein present in neurons, was being released by the salt-sensing neuron to shape the animal’s behavior.

Identifying the neuropeptide (or neuropeptides) responsible for the context-dependent signaling was the most challenging part of the study, because the worm has 115 genes that code for some 250 neuropeptides, Chalasani says. Luckily, there are only four different molecular machines that process all of these peptides; by using genetic knockouts of each of the four, Leinwand and Chalasani were quickly able to narrow the list down to about 40 genes which coded for insulin neuropeptides.

One by one, the team tracked olfactory neuron responses to high salt in worms missing each gene, finding that worms lacking the gene for an insulin neuropeptide known as INS-6 did not respond to increases in salt. Putting this peptide back restored the animal’s normal responses to high salt.

This image shows a C. Elegans, the species of roundworm the Salk researchers studied.

“It was rewarding to see that, while there might be more than one peptide signal, the contributions from INS-6 are certainly significant,” Leinwand says. She and Chalasani also found the specific receptor on the receiving end of the olfactory neurons.

That insulin was the main signaling molecule recruiting the olfactory neuron into a salt-sensing circuit was a big surprise.

“Traditionally, neuropeptides have been thought to modulate neuronal function over many seconds to many minutes,” Chalasani says. “But in this particular instance, it looks like the insulin is acting in less than a second to transfer information from the salt-sensing neuron to the neuron which normally responds to odor.”

Similar neuropeptide communication may also create flexible neural circuits that mediate the diverse behaviors that other animals and people perform in their environments. Insulin has many roles in people—it has been implicated in aging and metabolism, for example—but so far it has only been shown to function on a slower, minute time-scale.

Chalasani and Leinwand plan to investigate whether there are other fast neural circuit switches in worms—and if so, whether those switches act through neuropeptide signaling or some other mechanism. They’re also interested in how the circuit switch changes as the animal ages. “You would expect that as the animal is aging, some of this communication becomes less efficient,” Chalasani says.

This work was supported by the Searle Scholars Program, March of Dimes, Whitehall Foundation, Rita Allen Foundation, National Institutes of Health and the National Science Foundation.