LA JOLLA, CA—Researchers at the Salk Institute for Biological Studies have, for the first time, taken chimpanzee and bonobo skin cells and turned them into induced pluripotent stem cells (iPSCs), a type of cell that has the ability to form any other cell or tissue in the body.

Mouse iPSCs were created in 2006 by Kazutoshi Takahashi and Shinya Yamanaka at Kyoto University in Japan, and human iPSCs soon followed—feats which earned Yamanaka the Nobel Prize in Physiology or Medicine last year. Now scientists regularly use iPSCs to model diseases using cells that would be otherwise difficult to obtain from a living person or animal. By adding a combination of four key factors, a skin cell can be made into an iPSC, which can then be coaxed into forming liver, lung and brain cells in a culture dish.

It’s now possible to not only model disease using the cells, but also to compare iPSCs from humans to those of our closest living relatives—great apes, with which we share a majority of genes—for insight into what molecular and cellular features make us human. 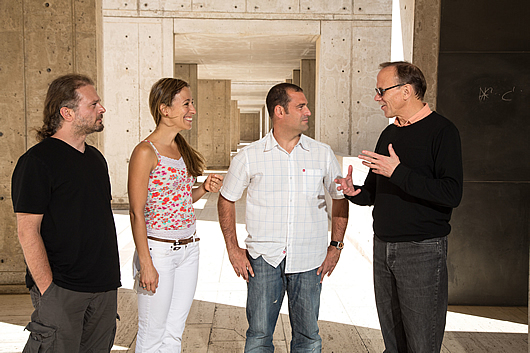 “Comparing human, chimpanzee and bonobo cells can give us clues to understand biological processes, such as infection, diseases, brain evolution, adaptation or genetic diversity,” says senior research associate Iñigo Narvaiza, who led the study with senior staff scientist Carol Marchetto at the Salk Institute in La Jolla. “Until now, the sources for chimpanzee and bonobo cells were limited to postmortem tissue or blood. Now you could generate neurons, for example, from the three different species and compare them to test hypotheses.”

In the new study, published online October 23, 2013, in the journal Nature, scientists found disparities in the regulation of jumping genes or transposons—DNA elements that can copy and paste themselves into spots throughout the genome—between humans and non-human primate cells. Jumping genes provide a means to rapidly shuffle DNA and might be shaping the evolution of our genomes, the scientists say.

Working in the lab of Salk’s Fred Gage, the Vi and John Adler Chair for Research on Age-Related Neurodegenerative Disease, Narvaiza, Marchetto and their colleagues identified genes that are differentially expressed between iPSCs from humans and both chimpanzees and bonobos.

To the group’s surprise, two of those genes code for proteins that restrict a jumping gene called long interspersed element-1 or L1, for short. Compared with non-human primate cells, human iPSCs expressed higher levels of these restrictors, called APOBEC3B and PIWIL2. “We weren’t expecting that,” Marchetto says. “Those genes caught our eyes, so they were the first targets we focused on.”

L1 and a handful of other jumping genes are abundant throughout our genomes. Where these bits of DNA insert themselves is hard to predict, and they can produce variable effects. For example, they might completely disrupt genes, modulate them, or cause them to be processed into entirely new proteins.

Using L1 tagged with a fluorescent marker, the group observed higher numbers of fluorescent iPSCs from non-human primates compared with humans. In separate experiments, they produced iPSCs with too much or too little APOBEC3B and PIWIL2, finding—as expected—that an excess of the two proteins dampened the mobility and reduced the appearance of newly inserted DNA in the non-human primate cells. 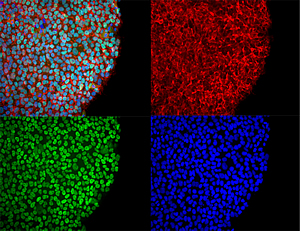 Skin cells from bonobos (pigmy chimps) were reprogrammed to pluripotent stem cells, an advance that allows scientists to study the differences between the neurons of humans and chimps. The colors show different aspects of the cells’ molecular components.

These results suggested that L1 elements insert themselves less often throughout our genomes. Indeed, looking at genomes of humans and chimpanzees that had already been sequenced, the researchers found that the primates had more copies of L1 sequences than did humans.

The question that remains is what would be the impact of differences in L1 regulation? “It could mean that we have gone, as humans, through one or more bottlenecks in evolution that decrease the variability present in our genome,” says Marchetto, though the hypothesis is admittedly hard to prove. It is known, however, that humans’ genomes are less variable than chimpanzees’.

The new study provides proof of concept that the iPSC technology can be used to understand some of the evolutionary differences between humans and non-human primates, says Narvaiza. The group plans to make technology, and all the data, available to the broader research community—which is especially helpful now that great ape research is severely restricted in the United States and abroad—so that other scientists can learn about primates using non-invasive, ethically sound methods.

The team plans to differentiate the stem cells into other tissues, such as neurons, and compare how the cells from different species behave. They will also use the iPSC technology to investigate how chimpanzees might differ from people in susceptibility to cancer, genetic diseases and viral infection.

The work was supported by the National Institutes of Health, the G. Harold & Leila Y. Mathers Foundation and the Leona M. and Harry B. Helmsley Charitable Trust.