LA JOLLA, CA—April 14-17 was the weekend to be at the Salk Institute for Biological Studies. If you care about art you could see an original Chihuly installation 9 feet in diameter suspended from an administration-building ceiling. If history is your passion, England’s Magna Carta—widely recognized as one of the most important documents in the history of democracy—was visiting. Finally, if you want to know who is fueling scientists’ ability to conduct groundbreaking research on some of the world’s most vexing medical dilemmas, you would see the new installation of Salk’s donor plaques in the courtyard, honoring those who are providing funding that helps change lives.

Donors, colleagues, friends and scientists gathered at the Salk to experience art, history, science and appreciation at the memorable celebrations. The festivities commenced on April 14 with the dramatic unveiling of the Donor Honor Wall, a series of stainless steel plaques that adorned the concrete sides of the entrance at the Institute. Each panel is engraved with the names of the outstanding benefactors whose generosity has provided vital funding to further the science and groundbreaking research at the Institute. 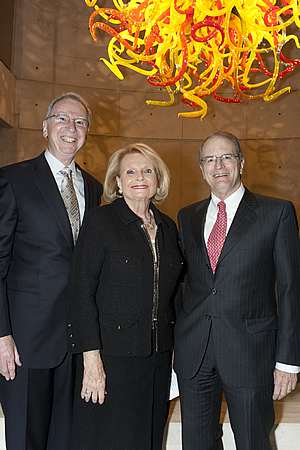 Irwin and Joan Jacobs with William R. Brody, President of the Salk Institute.

Not surprisingly, the March of Dimes appears on the first plaque inscription. The organization that famously provided the seed money to the Salk is now honored as the single biggest donor with its continued support throughout the institute’s history totaling $75 million.

“When the March of Dimes enabled Jonas Salk to build his dream, its volunteers hoped that it would become a place of world-class science,” said March of Dimes President Dr. Jennifer L. Howse. “Today, March of Dimes is so proud that the Institute to which they have provided unwavering support has surpassed all expectations and ranks as one of the leading centers of scientific excellence in the world.”

As Salk patrons admired the commemorative wall many expressed their deep respect and commitment to the Institute including James H. Handelman, Executive Director of the G. Harold & Leila Y. Mathers Foundation who said “Salk investigators are on the cutting edge of science, and the projects supported by the Mathers Foundation are leading the way to new paradigms and transformative discoveries. We are proud of our long history and friendship with the Institute, and we are thrilled to be a partner in the pioneering work of Salk researchers.”

“The research Salk is doing is making a difference in the fight against disease. They cultivate a great atmosphere – it’s an unfettered research institution,” added loyal donors Mary Jane and Bob Engman.”The vision and atmosphere created by Jonas Salk is alive and well.”

The evening’s celebration continued with the spectacular unveiling of The Sun, a soaring 9-foot glass sculpture by world renowned artist Dale Chihuly that was given to the Salk Institute by Irwin Jacobs, chairman of the Salk’s Board of Trustees, and his wife Joan Klein Jacobs. The Jacobses commissioned the art installation after experiencing the dramatic response the 2010 Salk Chihuly exhibit had on the internal and external community. 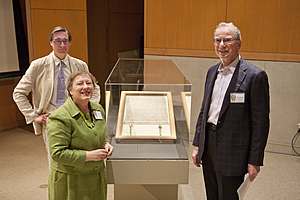 The Jacobses are also prominently displayed on the Donor Honor Wall having contributed over $20 million to the Salk.

The grand finale for all the events culminated over the weekend when more than 600 Salk staff, faculty, supporters, neighbors and friends had the rare opportunity to examine an original, 1217 engrossment of the Magna Carta, considered one of the most significant legal documents in the history of democracy, which was on display in the Frederic De Hoffman auditorium.

Secured for the Salk by Irwin Jacobs, it was one of four original engrossments belonging to the Bodleian Library from the University of Oxford and marked the first West Coast visit of the celebrated Great Charter. A panel of experts presented a fascinating lecture on Sunday and offered a wealth of facts and insight about the landmark manuscript, which to this day remains an important symbol of freedom and the rule of law.