Salk researchers have been able to grow patient-derived, healthy cells in the lab, coming a step closer to treating fatal blood disorders

Salk researchers have been able to grow patient-derived, healthy cells in the lab, coming a step closer to treating fatal blood disorders

LA JOLLA–For infants with severe combined immunodeficiency (SCID), something as simple as a common cold or ear infection can be fatal. Born with an incomplete immune system, kids who have SCID–also known as “bubble boy” or “bubble baby” disease–can’t fight off even the mildest of germs. They often have to live in sterile, isolated environments to avoid infections and, even then, most patients don’t live past a year or two. This happens because stem cells in SCID patients’ bone marrow have a genetic mutation that prevents them from developing critical immune cells, called T and Natural Killer (NK) cells.

Now, Salk researchers have found a way to, for the first time, convert cells from SCID patients to a stem cell-like state, fix the genetic mutation and prompt the corrected cells to successfully generate NK cells in the laboratory.

The success of the new technique suggests the possibility of implanting these tweaked cells back into a patient so they can generate an immune system. Though the new work, published March 12, 2015 in Cell Stem Cell, is preliminary, it could offer a potentially less invasive and more effective approach than current options.

“This work demonstrates a new method that could lead to a more effective and less invasive treatment for this devastating disease,” says senior author Inder Verma, Salk professor and American Cancer Society Professor of Molecular Biology. “It also has the potential to lay the foundation to cure other deadly and rare blood disorders.”

Previous attempts to treat SCID involved bone marrow transplants or gene therapy, with mixed results. In what began as promising clinical trials in the 1990s, researchers hijacked virus machinery to go in and deliver the needed genes to newly growing cells in the patient’s bone marrow. While this gene therapy did cure the disease at first, the artificial addition of genes ended up causing leukemia in a few of the patients. Since then, other gene therapy methods have been developed, but these are generally suited for less mild forms of the disease and require bone marrow transplants, a difficult procedure to perform on critically sick infants. 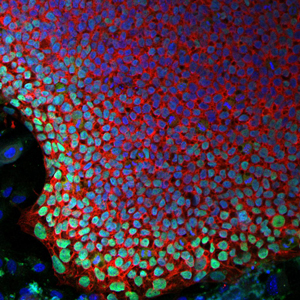 In this new approach to treating “bubble boy disease,” a stem cell colony generated from SCID-X1 patient cells (pictured, with cell nuclei in blue), can be genetically corrected and coaxed to grow new immune cells.

To achieve the new method, the Salk team secured a sample of bone marrow from a deceased patient in Australia. Using that small sample, the team developed the new method in three steps. First, they reverted the patient cells into induced pluripotent stem cells (iPSCs)–cells that, like embryonic stem cells, have the ability to turn into any type of tissue and hold vast promise for regenerative medicine.

“Once we had patient-derived stem cells, we could remove the genetic mutation, essentially fixing the cells,” explains one of the first authors and Salk postdoctoral researcher Amy Firth.

The second innovation was to use new gene editing technology to correct the SCID-related genetic deficiency in these iPSCs. To remove the mutation, the researchers used a technology called TALEN (similar to the better known CRISPR method). This set of enzymes act as molecular scissors on genes, letting researchers snip away at a gene and replace the base pairs that make up DNA with other base pairs.

“Unlike traditional gene therapy methods, we aren’t putting a whole new gene into a patient, which can cause unwanted side effects,” says Tushar Menon, first author and Salk postdoctoral researcher. “We use TALEN-based genome editing to change just one nucleotide in one gene to correct the deficiency. The technique is literally that precise.”

The third step of the work was to prompt the cells to proliferate into the vital immune system cells–not an easy task, but one that could offer a potentially unlimited supply that can be transplanted back into patients at intervals. To do this, the researchers collaborated with scientists at the University of California, Los Angeles, to use a concoction of nutrients and other factors that would encourage the iPSCs to generate NK cells.

And they succeeded. These corrected cells-in-a-dish did indeed develop mature NK cells.

Next, the team is working on reproducing the other vital immune components, T cells. So far, they have prompted the iPSCs to turn into the precursors of T cells, but have not yet been able to coax them to maturity. 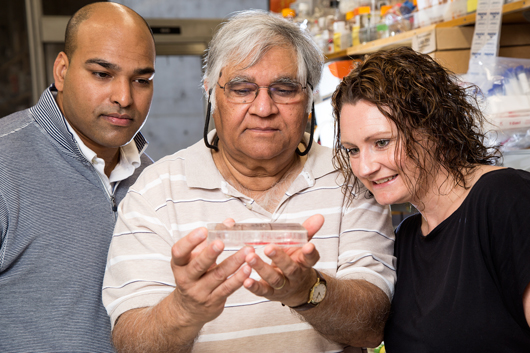 “Ultimately, we hope these efforts will help lead to the ‘holy grail’ in the field: the ability to create stem cells from iPSCs capable of generating all types of blood and immune cells,” says Verma, who is also the Irwin and Joan Jacobs Chair in Exemplary Life Science. The ability to generate the corrected blood stem cells themselves could yield a one-time treatment that would ultimately replenish functioning cells throughout a patient’s whole life.

“In lieu of that happening, we have an alternative that could work as a less invasive treatment and with the ability to easily scale up to mass quantities,” says Firth. Another benefit to using patient-derived cells as treatment is that the patient’s body typically won’t reject them (unlike donor tissue).

Other authors on the paper include: Susan Qualls, William Gilmore,
Eugene Ke, Oded Singer, Leif Anderson and Alexander Bornzin from the Salk Institute; Deirdre Scripture-Adams, Zoran Galic and Jerome Zack from UCLA; and Ian Alexander of the Children’s Medical Research Institute and The Children’s Hospital at Westmead in Australia.

This work was supported in part by grants from Ipsen/Biomeasure, Sanofi Aventis, the H.N. and Frances C. Berger Foundation, the Leona M. and Harry B. Helmsley Charitable Trust and the California Institute for Regenerative Medicine.