LA JOLLA–Salk researchers have developed an entirely new type of pill that tricks the body into thinking it has consumed calories, causing it to burn fat. The compound effectively stopped weight gain, lowered cholesterol, controlled blood sugar and minimized inflammation in mice, making it an excellent candidate for a rapid transition into human clinical trials.

Unlike most diet pills on the market, this new pill, called fexaramine, doesn’t dissolve into the blood like appetite suppressants or caffeine-based diet drugs, but remains in the intestines, causing fewer side effects. 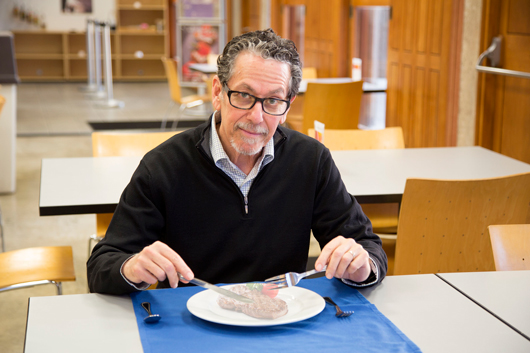 Ronald Evans, director of Salk’s Gene Expression Laboratory, has developed a compound called fexaramine that acts like an imaginary meal. Fexaramine, which tricks the body into reacting as if it has consumed calories, could lead to an effective obesity and diabetes treatment in humans.

“This pill is like an imaginary meal,” says Ronald Evans, director of Salk’s Gene Expression Laboratory and senior author of the new paper, published January 5, 2015 in Nature Medicine. “It sends out the same signals that normally happen when you eat a lot of food, so the body starts clearing out space to store it. But there are no calories and no change in appetite.”

In the United States, more than a third of adults are obese and 29.1 million people have diabetes, according to the Centers for Disease Control and Prevention. Both obesity and diabetes lead to an increase in health spending, a greater risk of health complications and a shorter lifespan.

Researchers at the Salk Institute have developed a fat-burning compound called fexaramine that leads to weight loss without typical side effects in animal models. Fexaramine tricks the body into reacting as if it has consumed calories and could lead to an effective treatment for type 2 diabetes and obesity in humans.

Evans’ laboratory has spent nearly two decades studying the farensoid X receptor (FXR), a protein that plays a role in how the body releases bile acids from the liver, digests food and stores fats and sugars. The human body turns on FXR at the beginning of a meal, Evans and others have shown, to prepare for an influx of food. FXR not only triggers the release of bile acids for digestion, but also changes blood sugar levels and causes the body to burn some fats in preparation for the incoming meal.

Pharmaceutical companies aiming to treat obesity, diabetes, liver disease and other metabolic conditions have developed systemic drugs that activate FXR, turning on many pathways that FXR controls. But these drugs affect several organs and come with side effects. Evans wondered whether switching on FXR only in the intestines–rather than the intestines, liver, kidneys and adrenal glands all at once–might have a different outcome. 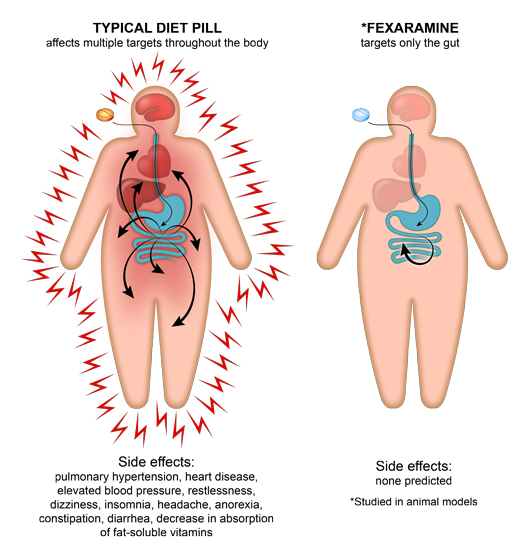 Salk researchers demonstrated that fexaramine stops weight gain and burns fat in animal models. Fexaramine is only absorbed in the gut and does not go into the bloodstream, so it does not cause side effects common for typical diet pills. After additional testing, researchers believe this will lead to an effective weight loss diabetes treatment for humans.

“When you eat, you have to quickly activate a series of responses all throughout the body,” says Evans. “And the reality is that the very first responder for all this is the intestine.”

Evans and his colleagues developed the fexaramine compound by departing from the drug scaffold that most pharmaceutical companies typically pursue when targeting FXR. “It turns out that when we administer this orally, it only acts in the gut,” explains Michael Downes, a senior staff scientist at Salk and co-corresponding author of the new work. Giving one such drug in a daily pill form that only reaches the intestines–without transporting into the bloodstream that would carry the drug throughout the body–not only curtails side effects but also made the compound better at stopping weight gain.

When the group gave obese mice a daily pill of fexaramine for five weeks, the mice stopped gaining weight, lost fat and had lower blood sugar and cholesterol levels than untreated mice. In addition, the mice had a rise in body temperature–which signals metabolism ramping up–and some deposits of white fat in their bodies converted into a healthier, energy-burning beige form of the tissue. Even the collection of bacteria in the guts of mice shifted when they received the drug, although what those changes mean isn’t clear yet.

So, why does fexaramine in the intestines work even better than drugs that simultaneously activate FXR throughout the body? Evans thinks it has to do with the natural order in which the body’s molecular pathways normally responds to a meal.

“The body’s response to a meal is like a relay race, and if you tell all the runners to go at the same time, you’ll never pass the baton,” says Evans. “We’ve learned how to trigger the first runner so that the rest of the events happen in a natural order.” 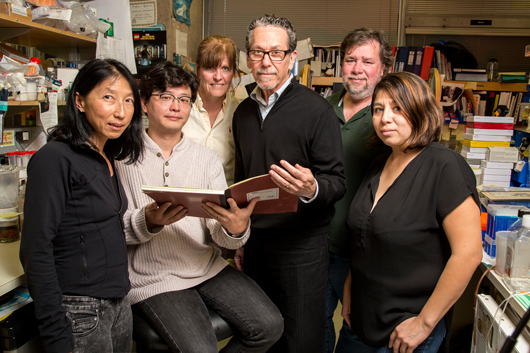 Since fexaramine doesn’t reach the bloodstream, it is also likely safer in humans than other FXR-targeting drugs, the researchers hypothesize. They’re already working to set up human clinical trials to test the effectiveness of fexaramine to treat obesity and metabolic disease. Ideally the drug, administered under a doctor’s guidance, would work in conjunction with diet and lifestyle changes, similar to weight-loss surgeries or other obesity or diabetes drugs.