LA JOLLA, CA-People who suffer from Peutz-Jeghers syndrome, a rare inherited cancer syndrome, develop gastrointestinal polyps and are predisposed to colon cancer and other tumor types. Carefully tracing the cellular chain-of-command that links nutrient intake to cell growth (and which is interrupted in Peutz-Jeghers syndrome), allowed researchers at the Salk Institute for Biological Studies to exploit the tumors’ weak spot.

Their study, published in this week’s online edition of the Proceedings of the National Academy of Sciences, demonstrates that precancerous cells’ insatiable appetite for glucose not only reveals their existence before they can develop into full-fledged colon cancer, but also hands targeted drugs the power to cut-off the tumors’ lifeline.

“Currently there is no treatment for Peutz-Jeghers syndrome. Patients simply have to undergo continual surgeries to keep cutting out colon polyps and tumors as they arise,” says Reuben Shaw, a Howard Hughes Medical Institute Early Career Scientist and Hearst Endowment assistant professor in the Salk’s Molecular and Cell Biology Laboratory. 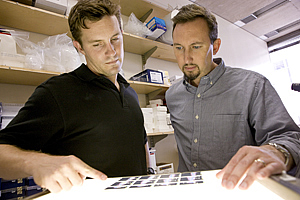 “Now, for the first time, FDG-PET scans, which detect increased glucose metabolism, can be used to monitor the development of these polyps and guide surgeries, since repeat surgeries are often necessary,” he says.

Peutz-Jeghers syndrome is caused by a mutation in the tumor suppressor LKB1. People who have inherited a flawed version of the LKB1 gene have a much greater risk (15 times higher than normal) of developing a malignant tumor. The LKB1 gene also is also mutated in 20 percent of cervical carcinomas and 30 percent of non-small cell lung carcinoma, one of the world’s most widespread and lethal cancers.

During earlier work, Shaw had discovered that LKB1 activates a metabolic master switch. The switch, an enzyme known as AMPK, acts like a gas gauge by sensing how much energy a cell has. When a cell has plenty of energy, AMPK remains inactive and the cell carries out its normal processes. If a cell runs on empty, LKB1 turns on AMPK, which puts a damper on cell growth and proliferation. When LKB1 is absent or disabled, cells facing starvation never get the message and simply continue to divide.

A Lkb1+/- mouse before and after treatment with rapamycin.

AMPK exerts its power via the mTOR pathway, which centers on the protein kinase mTOR-named after the powerful immunosuppressant rapamycin, which binds and inactivates mTOR (short for “mammalian target of rapamycin). “Since a loss of LKB1 results in a hyperactive mTOR signal, we wondered whether we could use rapamycin as a targeted drug to treat the tumors that arise as a result of Peutz-Jeghers,” says postdoctoral researcher and lead author David Shackelford, Ph.D. “It sounded great in theory and worked in cells kept in Petri dishes but we didn’t know whether it would work in animals.”

To find out he treated mice that had developed polyps in their intestines as the result of a mutation in LKB1 with rapamycin for two months. “When I looked at their GI tracts it was as clear as night and day,” he says. “The polyps in treated mice were much smaller to non-existent.”

Rapamycin analogs, which are already FDA-approved and are used in more than 50 ongoing clinical trials, could one day be used for the treatment of Peutz-Jeghers patients, says Shaw.

Shackelford then examined whether he could visualize the drug’s effectiveness using a technique called FDG-PET, which stands for “Fluoro Deoxyglucose – Positron Emission Tomography”. FDG-PET visualizes the uptake of radioactively-labeled glucose into cells. Normally, heart cells are the most ravenous consumers of glucose but in patients with cancer tumors including even distant metastases light up. To fuel their out-of-control growth, tumor cells use glucose at a far greater rate than their surrounding normal cells.

Most people assumed that polyps weren’t along far enough on the road to malignancy to be visible on a FDG-PET scan but Shackelford’s biochemical experiments had revealed that polyps found in mice lacking one copy of LKB1 expressed increased levels of glycolytic genes. He teamed up with imaging expert David R. Vera, Ph.D., Professor and Director of the Small Animal Imaging Research Program at the University of California, San Diego, to scan LKB1 mutant mice for the presence of gastrointestinal polyps with UCSD’s microPET scanner. “When the first images came back, they confirmed what we had seen in our biochemical experiments,” says Shackelford. “Their intestines lit up, and an autopsy confirmed that a polyp had caused the signal.”

“This result really could change the life of people with Peutz-Jeghers syndrome,” says Shaw. “Now, FDG-PET can not only be used detect when polyps arise, but also to monitor the therapeutic response to treatment, be it rapamycin or any other drug.”

While this type of colon cancer is rare, non-small cell lung cancer affects more than 200,000 people each year in the U.S. alone, and a third of them carry a mutation in the LKB1 gene. Shaw hopes that, one day, a simple FDG-PET scan may allow oncologists to distinguish between different subset of lung tumors and custom-tailor their treatment based on their genetic signature.

Researchers who also contributed to the work include Debbie S. Vasquez and Mathias Leblanc in the Molecular and Cell Biology Laboratory, Jacqueline Corbeil at the UCSD Center for Molecular Imaging, as well as Shulin Wu and Chin-Lee Wu in the Department of Urology at the Massachusetts General Hospital in Boston.

This work was supported by the National Cancer Institute at the National Institutes of Health, the American Cancer Society, and the V Foundation for Cancer Research.