How the retina works: Like a multi-layered jigsaw puzzle of receptive fields

Home - Salk News - How the retina works: Like a multi-layered jigsaw puzzle of receptive fields

How the retina works: Like a multi-layered jigsaw puzzle of receptive fields

La Jolla, CA—About 1.25 million neurons in the retina — each of which views the world only through a small jagged window called a receptive field — collectively form the seamless picture we rely on to navigate our environment. Receptive fields fit together like pieces of a puzzle, preventing “blind spots” and excessive overlap that could blur our perception of the world, according to researchers at the Salk Institute for Biological Studies.

In the April 7 issue of the journal Public Library of Science, Biology, the scientists say their findings suggest that the nervous system operates with higher precision than previously appreciated and that apparent irregularities in individual cells may actually be coordinated and finely tuned to make the most of the world around us. 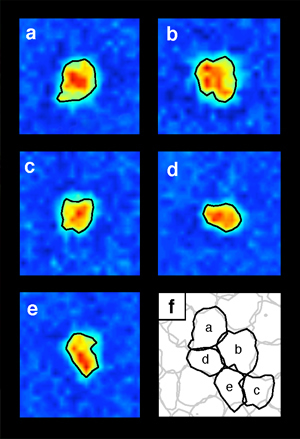 Each neuron in the retina views the worlds through a small, irregularly shaped window. These regions fit together like pieces of a puzzle, preventing “blind spot” and excessive overlap that could blur our perception of the world.

Previously, the observed irregularities of individual receptive fields suggested that the collective visual coverage might be uneven and irregular, potentially posing a problem for high-resolution vision. “The striking coordination we found when we examined a whole population indicated that neuronal circuits in the retina may sample the visual scene with high precision, perhaps in a manner that approaches the optimum for high-resolution vision,” says senior author E.J. Chichilnisky, Ph.D., an associate professor in the Systems Neurobiology Laboratories.

All visual information reaching the brain is transmitted by retinal ganglion cells. Each of the 20 or so distinct ganglion cell types is thought to transmit a complete visual image to the brain, because the receptive fields of each type form a regular lattice covering visual space. However, within each regular lattice, the individual cells’ receptive fields have irregular and inconsistent shapes, which could potentially result in patchy coverage of the visual field.

To understand how the visual system overcomes this problem, postdoctoral researcher and first author Jeffrey L. Gauthier, Ph.D., used a microscopic electrode array to record the activity of ganglion cells in isolated patches of retina, the tissue lining the back of the eye.

After monitoring hundreds of ganglion cells over several hours, he distinguished between different cell types based on their light response properties. “Often people record from many cells simultaneously but they don’t know which cell belongs to which type,” says Gauthier. Without this information, he says, he wouldn’t have been able to observe that the receptive fields of neighboring cells of a specific type interlock, complementing each others’ irregular shapes.

“The receptive fields of all four cell types we examined were precisely coordinated,” he says, “but we saw no coordination between cells of different types, emphasizing the importance of clearly distinguishing one cell type from another when studying sensory encoding by a population of neurons.”