La Jolla, CA – With the help of genetically engineered mice whose livers turned into glowing light bulbs, researchers at the Salk Institute for Biological Studies have illuminated the underpinnings of an insidious and growing health concern – type II diabetes.

In the study published in the September 5 advance online edition of Nature, the researchers report that a protein called TORC2 serves as a key biochemical control point linking feeding, insulin, and elevated blood sugar production in the liver. The findings highlight TORC2 and an enzyme called SIK2 as potential drug targets for treating type II diabetes.

An estimated 21 million Americans have “adult-onset,” or type II diabetes, and another 54 million have a condition called pre-diabetes where blood sugar levels remain abnormally high even after fasting. According to the Centers for Disease Control and Prevention, one in three Americans born in 2000 will develop diabetes, an incurable disease that can lead to blindness, kidney failure, heart disease, and other serious debilitations. 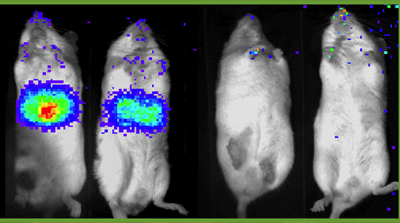 Mice on the left: During fasting, the CREB/TORC2 switch turns on glucose production in the liver. Salk researchers made this process visible with the help of luciferase, which normally produces the
glow of firefly tail but in this case lights up the livers of mice actively producing glucose. Mice on the right: In response to feeding, mice produce insulin, which shuts down glucose production in the liver.

Twenty years ago, Montminy discovered a metabolic switch, a protein called CREB that responds to various physiological signals by turning on and off different gene networks in the body. During periods of fasting when blood sugar stocks run low, for example, CREB turns on gluceoneogenesis in the liver. Recently, Montminy’s team identified a second essential component of the CREB switch, a protein called TORC2, that binds to CREB and enables the switch to work.

While the researchers had established that TORC2 was essential to sugar production during fasting, they were keenly interested in understanding the protein’s role during feeding. That knowledge might clue them in to the causes of insulin resistance.

To learn how feeding and insulin affect TORC2, the researchers, led by post-doctoral fellows Renaud Dentin and Yi Liu, inserted into laboratory mice the luciferase gene, which produces the glow of firefly tails. They rigged the gene in such a way that it could only be turned on in the liver by the CREB/TORC2 switch. When the gene was turned on, the luciferase enzyme caused the liver to light up. Using a sensitive camera, the light – a direct measure of CREB/TORC2 activity – could be detected and measured from outside of the live mice. Using biochemical and genetic techniques to change the levels of various molecules in the pathway, including insulin and TORC2, the researchers measured the effect of these changes on the amount of light emitted from the liver.

The experiments revealed that the rise in insulin during feeding turned off the CREB/TORC2 switch. Insulin first activated a liver enzyme called SIK2, which in turn inactivated TORC2 by chemically tagging it with a phosphate group. The extra phosphate group caused TORC2 to leave the cell nucleus where it needed to be to turn on genes. Once the protein left the nucleus, the researches discovered, it was destroyed by the cell’s protein degradation machinery or proteasome.

“You need TORC2 to be downregulated by phosphorylation during feeding. If you don’t do that, then the whole gluconeogenic program stays on, and glucose levels go up,” Montminy says. Understanding these key roles of TORC2 and SIK2, he emphasizes, points to their potential as drug targets for stemming the rising tide of fasting blood sugar.

But the glowing mice might one day do more than illuminate the relationship between feeding, fasting, and the CREB/TORC2 switch. “Because the luciferase mice provide a direct look at glucose metabolism in the liver, this imaging approach may be useful in evaluating potential drugs for the treatment of type II diabetes,” says Montminy.

Researchers who also contributed to the study include postdoctoral researchers Susan Hedrick, PhD., Thomas Vargas, Ph.D., and graduate student Jose Heredia, in the Clayton Foundation Laboratories for Peptide Biology at the Salk Institute, Seung-Hoi Koo, Ph.D., a former postdoctoral researcher in the Montminy lab and now at the Sungkyunkwan University School of Medicine in Korea, and professor John Yates III, Ph.D., at the Scripps Research Institute in La Jolla, California.