How basil gets its zing

Home - Salk News - How basil gets its zing

How basil gets its zing

La Jolla, CA – The blend of aromatic essential oils that gives fresh basil leaves their characteristic warm and sweet aroma is well characterized but not much is known about the enzymatic machinery manufacturing the odiferous mix. Researchers at the Salk Institute for Biological Studies and the University of Michigan followed their noses and solved part of the molecular puzzle. 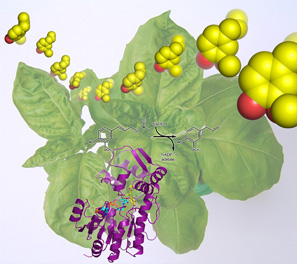 The characteristic scent of the basil plant is due to a volatile compound called eugenol (shown in yellow), which is produced by the basil enzyme, eugenol synthase (shown in purple). Obtaining the three-dimensional structure of eugenol synthase illuminated the inner workings of the enzyme and paves the way for understanding the evolution of relatives throughout the plant kingdom and the future engineering of economically vital plant properties, including floral scent and flavor.

Their study, published in the Oct. 4 issue of the journal PLoS ONE, provides a three-dimensional snapshot of the enzyme basil Eugenol Synthase frozen in mid-action as it produces eugenol, the fragrant molecule responsible for basil’s spicy overtones reminiscent of cloves and cinnamon.

“This particular enzyme is very interesting since it belongs to a large family of enzymes that perform what we call ‘household reactions’ but, through evolutionary selection, acquired an additional and completely new function,” says Howard Hughes Medical Institute investigator Joseph P. Noel, Ph.D, director of the Jack H. Skirball Center for Chemical Biology and Proteomics, who led the study.

“Eugenol Synthase takes a basic building block that is usually employed to make wood and turns it into something that is almost the complete opposite of wood – a volatile molecule that easily becomes airborne, is highly aromatic and possesses antimicrobial and pain-dulling properties,” marvels Noel.

Traditionally, plant biology has been focusing on genetic approaches but in recent years plant biochemistry has been undergoing a sort of renaissance, not least because the natural food movement sparked newfound interest in the health-promoting and medicinal properties of natural plant chemicals.

“Plant genetics uncovered a lot of genes with important functions but ultimately we need to understand how these systems work at a biochemical level,” notes Noel. “We are consuming all these chemicals as part of our diet, some of which are very beneficial, preserve our food and impart some really interesting flavors and fragrances for our taste buds and noses, but some of which are toxic.”

Plants rely on a complex set of bioactive volatile chemicals, which diffuse easily through the membranes of cells that produce them to communicate and interact with the outside world. These often aromatic and highly specialized compounds entice pollinators, fend off pathogens, bacteria, and leaf-munching animals alike.

Since antiquity, humans have exploited both the antimicrobial properties and pleasing aromas and flavors of plants rich in certain secondary metabolites – better known as spices – to preserve and flavor food. The food-preserving and analgesic properties of eugenol-rich cloves lured explorers like Ferdinand Magellan and Christopher Columbus across the seas in search of new routes to the Far East, which was, at the time, the sole source of cloves. Although Columbus never reached India, he did discover the Americas and, incidentally, found the source for a new spice, allspice, which contains the closely related chemical isoeugenol.

In an earlier study, also performed by the collaborative team led by Dr. Noel and University of Michigan plant biochemistry professor Eran Pichersky, the enzymes that synthesize eugenol and isoeugenol from biosynthetic precursors of the plant polymer lignin, the “woody” component of trees, were identified. But how the enzymes accomplished their task at the molecular level remained unclear.

With the help of x-ray crystallography and a small chemical – custom-tailored by senior staff chemist Thomas J. Baiga in Noel’s lab – the research team was able to lock basil eugenol synthase in mid-reaction thereby capturing a detailed, three-dimensional view of the enzyme’s interaction with its substrate and vitamin co-factor.

“The enzyme utilizes an unusual mechanism involving two distinct steps,” explains HHMI research specialist and first author Gordon V. Louie, Ph.D. “A subtle change in the substrate binding site after natural selection during the course of plant evolution added the capability to form a reactive intermediate through a concerted push-pull mechanism, which facilitates the second chemical step, a classic reduction reaction carried out by many evolutionary relatives of eugenol synthase.”

The next step for Noel, Pichersky and their research teams will be to compare eugenol synthases and closely related synthases making natural chemicals similar to eugenol from a wide variety of plants. “It allows you to peer back in time and see how these systems arose and how they are used in the present day.”

Understanding the biosynthetic pathways used by plants to make all of these secondary metabolites may help the Noel-Pichersky research team and others to improve the flavor and nutritional quality of plants that are part of our diet. Being able to tinker with natural scents could resurrect the waning scent of roses or create novel fragrances for the perfume industry. But scent engineering has the potential to do more than just pleasing human noses. It could increase crop yields by enticing new pollinators or natural pest controllers such as parasitic wasps to visit commercially grown plants.