LA JOLLA, CA—The power of the brain lies in its trillions of intercellular connections, called synapses that together form complex neural “networks.” While neuroscientists have long sought to map these individual connections to see how they influence specific brain functions, traditional techniques have been unsuccessful. Now, scientists at the Salk Institute and the Gladstone Institutes, using an innovative brain- tracing technique, have found a way to untangle these networks. These findings offer new insight into how specific brain regions connect to each other, while also revealing clues as to what may happen, neuron by neuron, when these connections are disrupted.

In the latest issue of Neuron, a team led by Edward Callaway, a Salk professor and holder of the Audrey Geisel Chair in Biomedical Science, and Anatol Kreitzer, a Gladstone investigator, combined mouse models with a sophisticated tracing technique—known as the monosynaptic rabies virus system—to assemble brain-wide maps of neurons that connect with the basal ganglia, a region of the brain that is involved in movement and decision-making. Developing a detailed anatomical understanding of this region is important as it could inform research into disorders that can be traced to basal ganglia dysfunction, including both Parkinson’s disease and Huntington’s disease.

“The monosynaptic rabies virus approach—pioneered by Dr. Callaway—is ingenious in the exquisite precision that it offers compared with previous methods, which were messier with a much lower resolution,” explained Kreitzer, who is also an assistant professor of neurology and physiology at the University of California, San Francisco, with which Gladstone is affiliated. “In this paper, we took the approach one step further by activating the tracer genetically, which ensures that it is only turned on in specific neurons in the basal ganglia. This is a huge leap forward technologically, as we can be sure that we’re following only the networks that connect to particular kinds of cells in the basal ganglia from other parts of the brain.” 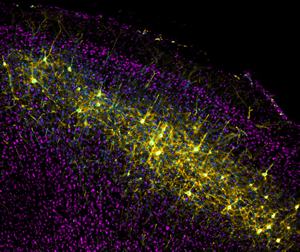 The microscope image shows nerve cells in the mouse brain that have been labeled with a modified rabies virus. These cells send direct connections to striatum, a region of the brain that regulates voluntary movement. The striatum is disrupted in degenerative disorders such as Parkinson’s disease and Huntington’s disease.

At Gladstone, Kreitzer focuses his research on the basal ganglia as it relates to Parkinson’s. Last year, he and his team published research that revealed clues to the relationship between two types of neurons found in the region-and how they guide both movement and decision-making. These two types, called direct-pathway medium spiny neurons (dMSNs) and indirect-pathway medium spiny neurons (iMSNs), act as opposing forces. dMSNs initiate movement, like the gas pedal, and iMSNs inhibit movement, like the brake. The latest research from the Kreitzer lab further found that these two types are also involved in behavior, specifically decision-making, and that dysfunctions in dMSNs and iMSNs are associated with addictive and depressive behaviors, respectively. These findings were important because they provided a link between the physical neuronal degeneration seen in movement disorders, such as Parkinson’s, and some of the disease’s behavioral aspects. But this study still left many questions unanswered.

“For example, while that study and others like it revealed the roles of dMSNs and iMSNs in movement and behavior, we knew very little about how other brain regions influenced the function of these two neuron types,” said Nicholas Wall, a Salk Institute postdoctoral fellow and the paper’s first author. “The monosynaptic rabies virus system helps us address that question.”

The system, originally developed in 2007 and refined by Wall and Callaway for targeting specific cell types in 2010, uses a modified version of the rabies virus to “infect” a brain region, which in turn targets neurons that are connected to it. When the system was applied in genetic mouse models, the team could see specifically how sensory, motor, and reward structures in the brain connected to MSNs in the basal ganglia. What they found was surprising.

“We noticed that some regions showed a preference for transmitting to dMSNs vs. iMSNs, and vice versa,” said Kreitzer. “For example, neurons residing in the brain’s motor cortex tended to favor iMSNs, while neurons in the sensory and limbic systems preferred dMSNs. This fine-scale organization, which would have been virtually impossible to observe using traditional techniques, allows us to predict the distinct roles of these two neuronal types.”

“These initial results should be treated as a resource not only for decoding how this network guides the vast array of very distinct brain functions, but also how dysfunctions in different parts of this network can lead to different neurological conditions,” said Callaway. “If we can use the rabies virus system to pinpoint distinct network disruptions in distinct types of disease, we could significantly improve our understanding of these disease’s underlying molecular mechanisms-and get even closer to developing solutions for them.”

This research was supported by the Gatsby Charitable Foundation and the National Institutes of Health.

About the Gladstone Institutes:
Gladstone is an independent and nonprofit biomedical-research organization dedicated to accelerating the pace of scientific discovery and innovation to prevent, treat and cure cardiovascular, viral and neurological diseases. Gladstone is affiliated with the University of California, San Francisco.