LA JOLLA, CA—Scientists at the Salk Institute for Biological Studies have identified patterns of epigenomic diversity that not only allow plants to adapt to various environments, but could also benefit crop production and the study of human diseases.

Published March 6 in Nature, the findings show that in addition to genetic diversity found in plants throughout the world, their epigenomic makeup is as varied as the environments in which they are found. Epigenomics is the study of the pattern of chemical markers that serve as a regulatory layer on top of the DNA sequence. Depending on where they grow, the plants’ epigenomic differences may allow them to rapidly adapt to their environments.

Epigenomic modifications alter gene expression without changing the letters of the DNA alphabet (A-T-C-G), providing cells with an additional tool to fine-tune how genes control the cellular machinery. These changes occur not only in plants, but in humans as well. 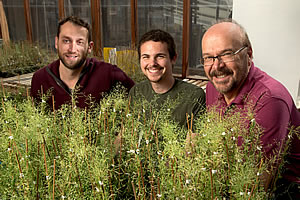 “We looked at plants collected from around the world and found that their epigenomes are surprisingly different,” says senior author Joseph R. Ecker, a professor in Salk’s Plant Molecular and Cellular Biology Laboratory and holder of the Salk International Council Chair in Genetics. “This additional diversity may create a way for plants to rapidly adapt to diverse environments without any genetic change in their DNA, which takes a very long time.”

By understanding epigenomic alterations in plants, scientists may be able to manipulate them for various purposes, including biofuels and creating crops that can withstand stressful events such as drought. That knowledge of epigenomic changes in crop plants could tell producers what to breed for and could have a huge impact on identifying plants that can survive certain conditions and adapt to environmental stressors, says Ecker, who is also a Howard Hughes Medical Institute and Gordon and Betty Moore Foundation Investigator.

Using MethylC-Seq, a method for mapping epigenomic changes developed by Ecker, the researchers analyzed methylation patterns from a population of Arabidopsis thaliana, a modest mustard weed that has become to plant biology what laboratory mice are to animal biology. The plants were from a variety of climates in the Northern Hemisphere, from Europe to Asia and Sweden to the Cape Verde Islands. Ecker’s team examined the genomes and methylomes of A. thaliana, the makeup of their entire genetic and epigenomic codes, respectively, which is the first step toward understanding the impact of epigenetic changes on the plants’ physical characteristics and ability to adapt to their environment.

“We expected variation in methylation patterns among groups of plants from around the globe,” says co-lead author Robert J. Schmitz, a postdoctoral researcher in Ecker’s lab. “The amount, however, was far greater than we ever anticipated.” 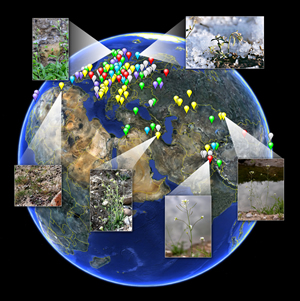 This graphic depicts a collection of wild Arabidopsis thaliana from around the world that have adapted to their local environment. This collection of plants was used to understand the patterns of population epigenomic diversity within a species.

By analyzing these patterns, Ecker’s team was able to chart their effects on the activity of genes in the plants’ genome. Scientists know that methylation can inactivate genes, but in contrast to DNA mutations, methylation patterns are reversible, giving the plants the ability to temporarily activate genes. The identification of genes that are epigenetically regulated has greatly narrowed the potential candidates important for environmental adaptation.

Methylation silencing also occurs in humans-and that has implications for treating cancer, a hallmark of which is the silencing of tumor suppressor genes. “If these genes are turned off by the epigenome, they could potentially be turned back on by removing the DNA methylation,” says study co-lead author Matthew Schultz, a graduate student in Ecker’s lab. Understanding how these methylation variants form in the wild will help toward better engineering of epigenomes.

Ecker’s team will next study how methylation variations affect the traits of plants. They will examine stress-induced epigenomic changes and how they might provide clues as to which alterations are most important for the plants.

Other researchers on the study were Mark A. Urich, Joseph R. Nery, Mattia Pelizzola, Andrew Alix, Richard B. McCosh, and Huaming Chen, from the Salk Institute; and Ondrej Libiger and Nicholas J. Schork of The Scripps Research Institute.