LA JOLLA, CA—The cerebral cortex, the largest and most complex component of the brain, is unique to mammals and alone has evolved human specializations. Although at first all stem cells in charge of building the cerebral cortex—the outermost layer of neurons commonly referred to as gray matter—are created equal, soon they irrevocably commit to forming specific cortical regions. But how the stem cells’ destiny is determined has remained an open question.

In the Oct. 11 advance online edition of Nature Neuroscience, scientists at the Salk Institute for Biological Studies report that they have identified the first genetic mechanism that determines the regional identity of progenitors tasked with generating the cerebral cortex. Their discovery reveals a critical period during which a LIM homeodomain transcription factor known as Lhx2 decides over the progenitors’ regional destiny: Once the window of opportunity closes, their fate is sealed. 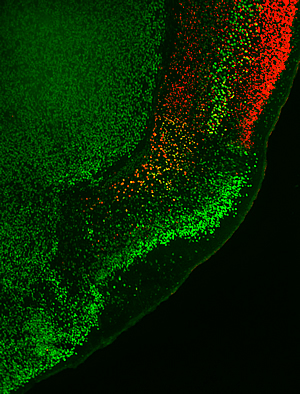 In the brains of normal mice, the six-layered neocortex-indicated by the red marker and shown in the upper right corner-is located adjacent to the three-layered olfactory cortex-indicated by the bright green marker, which also labels layer 5 of the neocortex. If the Lhx2 is missing during a critical period, the neocortex is transformed into olfactory cortex.

“These findings provide a foundation for understanding the important process of developing the distinct regions of the cerebral cortex and determining their unique properties,” says Dennis O’Leary, Ph.D., a professor in the Molecular Neurobiology Laboratory, who led the study.

This knowledge will also potentially help in understanding the genetic underpinnings of many neurodegenerative disorders, and provide the means to uniquely specify stem cells to repair specific parts of the brain ravaged by disease or injury.

During embryonic brain development, the stem cells that will give rise to the cerebral cortex pass through a series of tightly regulated stages: from omnipotent stem cells to cortical progenitor cells that will eventually form functionally specialized regions, such as the six-layered neocortex, the biggest and evolutionarily most recent part of the cerebral cortex, and the older three-layered olfactory cortex among others.

Early during neurogenesis, stem cell-like progenitor cells known as neuroepithelial cells undergo symmetric cell division to expand the pool of neuroepithelial cells. Later, they differentiate into more mature progenitor cells referred to as radial glia, which divide asymmetrically to produce a constant stream of both progenitors and neurons, the latter migrating outward to establish the gray matter of specialized cortical regions.

In a study published earlier this year, O’Leary and Setsuko Sahara, Ph.D., a senior research associate in the O’Leary lab, uncovered that the growth factor Fgf10 controls the timing of the critical transition period that bridges the early expansion phase of neuroepithelial cells and the later neurogenic phase of radial glia. Now, the Salk researchers wanted to know when and how these cells acquire their future regional identity.

The predominant model for determining genetic mechanisms that specify the production of distinct types of neurons has been the spinal cord. “In the spinal cord distinct subpopulations of progenitors that generate different classes of neurons are defined by unique sets of transcriptions factors, and are separated by sharp spatial borders,” explains O’Leary. “But in the cerebral cortex the situation is very different. There are no genes that we or anybody else have identified that define separate subpopulations of progenitors that generate neurons that form the different regions of the cerebral cortex. Thus a different mechanism must operate.”

The defining characteristic of progenitor cells that will go on to form the cerebral cortex is the expression of Emx1, a homeodomain transcription factor. O’Leary proposed that the regional identity of progenitors in the Emx1 lineage may involve a graded expression of one or more transcription factors that define unique subpopulations of progenitors via differences in their expression levels. The most promising candidate was Lhx2, which is expressed in all progenitors of the Emx1 lineage but at different levels in a graded pattern. Testing this hypothesis required that Shen-ju Chou, Ph.D., a senior research associate in the O’Leary lab and first-author of this study, develop a novel genetically-engineered mouse to delete Lhx2 in a conditional fashion.

Shen-ju and two other members of O’Leary’s research team, Carlos G. Perez Garcia, Ph.D. and Todd T. Kroll, Ph.D., then used this mouse line to delete Lhx2 at different times during embryonic development to assess whether Lhx2 had any say over the progenitors’ fate in producing regions of the cerebral cortex.

When the researchers deleted Lhx2 from neuroepithelial cells before they made the transition into radial glia, the neocortex was transformed into a large, out-of-place olfactory cortex. But when they deleted Lhx2 just one day later the transformation did not occur, indicating that the progenitors’ regional identity was fixed.

“These experiments show that Lhx2 regulates the regional fate decision of progenitors of the Emx1 lineage to generate neocortex or olfactory cortex” says Chou. “Lhx2 needs to be present in appropriate quantities during a critical window of time for progenitors to make the appropriate fate decision. Adds O’Leary, “This finding dovetails nicely with our previous study on Fgf10 by demonstrating that the critical time window for the regional fate decision determined by Lhx2 closes once neuroepithelial cells have made the transition to radial glia, a step regulated by Fgf10.”

O’Leary’s team plans to extend this work to determine the mechanism of action of Lhx2, and whether modulating Lhx2 levels can direct, or restrict, the differentiation of embryonic stem (ES) cells, or induced pluripotent stem (iPS) cells. This work will be important for developing strategies for brain repair.

This work was supported by grants from the National Institutes of Health.