La Jolla, CA—A study led by researchers at the Salk Institute for Biological Studies, has catapulted the field of regenerative medicine significantly forward, proving in principle that a human genetic disease can be cured using a combination of gene therapy and induced pluripotent stem (iPS) cell technology. The study, published in the May 31, 2009 early online edition of Nature, is a major milestone on the path from the laboratory to the clinic.

“It’s been ten years since human stem cells were first cultured in a Petri dish,” says the study’s leader Juan-Carlos Izpisúa Belmonte, Ph.D., a professor in the Gene Expression Laboratory and director of the Center of Regenerative Medicine in Barcelona (CMRB), Spain. “The hope in the field has always been that we’ll be able to correct a disease genetically and then make iPS cells that differentiate into the type of tissue where the disease is manifested and bring it to clinic.” 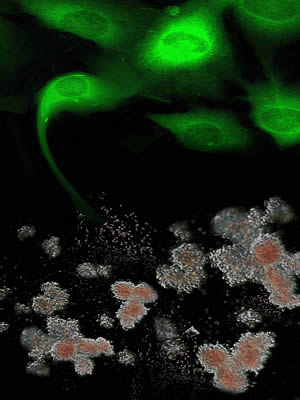 Genetically-corrected fibroblasts from Fanconi anemia patients (shown in green at the top) are reprogrammed to generate induced pluripotent stem cells, which, in turn, can be differentiated into disease-free hematopoietic progenitors, capable of producing blood cells in vitro (bottom: Erythroid colonies.)

Although several studies have demonstrated the efficacy of the approach in mice, its feasibility in humans had not been established. The Salk study offers the first proof that this technology can work in human cells.

Belmonte’s team, working with Salk colleague Inder Verma, Ph.D., a professor in the Laboratory of Genetics, and colleagues at the CMRB, and the CIEMAT in Madrid, Spain, decided to focus on Fanconi anemia (FA), a genetic disorder responsible for a series of hematological abnormalities that impair the body’s ability to fight infection, deliver oxygen, and clot blood. Caused by mutations in one of 13 Fanconi anemia (FA) genes, the disease often leads to bone marrow failure, leukemia, and other cancers. Even after receiving bone marrow transplants to correct the hematological problems, patients remain at high risk of developing cancer and other serious health conditions.

“We haven’t cured a human being, but we have cured a cell,” Belmonte explains. “In theory we could transplant it into a human and cure the disease.”

Although hurdles still loom before that theory can become practice-in particular, preventing the reprogrammed cells from inducing tumors-in coming months Belmonte and Verma will be exploring ways to overcome that and other obstacles. In April 2009, they received a $6.6 million from the California Institute Regenerative Medicine (CIRM) to pursue research aimed at translating basic science into clinical cures.

“If we can demonstrate that a combined iPS-gene therapy approach works in humans, then there is no limit to what we can do,” says Verma.

For information on the commercialization of this technology, the Salk Office of Technology Development at (858) 453-4100, Ext. 1278.