Fruit fly intestine may hold secret to the fountain of youth

Fruit fly intestine may hold secret to the fountain of youth

LA JOLLA, CA—One of the few reliable ways to extend an organism’s lifespan, be it a fruit fly or a mouse, is to restrict calorie intake. Now, a new study in fruit flies is helping to explain why such minimal diets are linked to longevity and offering clues to the effects of aging on stem cell behavior.

Scientists at the Salk Institute for Biological Studies and their collaborators found that tweaking a gene known as PGC-1, which is also found in human DNA, in the intestinal stem cells of fruit flies delayed the aging of their intestine and extended their lifespan by as much as 50 percent.

“Fruit flies and humans have a lot more in common than most people think,” says Leanne Jones, an associate professor in Salk’s Laboratory of Genetics and a lead scientist on the project. “There is a tremendous amount of similarity between a human small intestine and the fruit fly intestine.”

The findings of the study, which was a collaboration between researchers at the Salk Institute for Biological Studies and the University of California, Los Angeles, were published online in Cell Metabolism.

Scientists have long known that calorie restriction, the practice of limiting daily food intake, can extend the healthy lifespan of a range of animals. In some studies, animals on restricted diets lived more than twice as long on average as those on non-restricted diets.

While little is known about the biological mechanisms underlying this phenomenon, studies have shown that the cells of calorie-restricted animals have greater numbers of energy-generating structures known as mitochondria. In mammals and flies, the PCG-1 gene regulates the number of these cellular power plants, which convert sugars and fats from food into the energy for cellular functions. 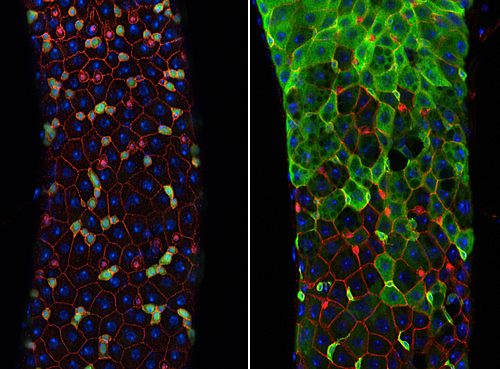 In young fruit flies (left), the intestinal tissues are highly organized, as shown by the even distribution of different cell types, each represented by a different color. As flies age, this order breaks down, caused by unregulated stem cell activity and inability to form cells with specialized functions. The Salk scientists and their collaborators discovered that activating the fruit fly version of the PCG-1 gene delayed this aging process, while simultaneously extending lifespan.

This chain of connections between the mitochondria and longevity inspired Jones and her colleague to investigate what happens when the PCG-1 gene is forced into overdrive. To do this, they used genetic engineering techniques to boost the activity of the fruit fly equivalent of the PCG-1 gene. The flies (known as Drosophila melanogaster) have a short lifespan, allowing the scientists to study aging and longevity in ways that aren’t as feasible in longer-lived organisms such as mice or human.

The researchers found that boosting the activity of dPGC-1, the fruit fly version of the gene, resulted in greater numbers of mitochondria and more energy-production in flies – the same phenomenon seen in organisms on calorie restricted diets. When the activity of the gene was accelerated in stem and progenitor cells of the intestine, which serve to replenish intestinal tissues, these cellular changes correspond with better health and longer lifespan. The flies lived between 20 and 50 percent longer, depending on the method and extent to which the activity of the gene was altered.

“Their intestines were beautiful,” says Christopher L. Koehler, a doctoral-student at University of California San Diego who conducts research in Jones’ laboratory. “The flies with the modified gene activity were much more active and robust than the other flies.”

Part of the reason for this might be that boosting the fruit fly version of PCG-1 stimulates the stem cells that replenish the intestinal tissues, keeping the flies’ intestines healthier. The findings suggest that the fruit fly version of PCG-1 can act as a biological dial for slowing the aging process and might serve as a target for drugs or other therapies to put the breaks on aging and age-related diseases.

“Slowing the aging of a single, important organ – in this case the intestine – could have a dramatic effect on overall health and longevity,” Jones says. “In a disease that affects multiple tissues, for instance, you might focus on keeping one organ healthy, and to do that you might be able to utilize PGC-1.”

The Salk researchers were supported by the Emerald Foundation, the G. Harold and Leila Y. Mathers Charitable Foundation, the American Cancer Society, the California Institute for Regenerative Medicine and the National Institutes of Health.