From the corner of the eye: Paying attention to attention

Home - Salk News - From the corner of the eye: Paying attention to attention

From the corner of the eye: Paying attention to attention

La Jolla, CA – Every kid knows that moms have “eyes in the back of their heads.” We are adept at fixing our gaze on one object while independently directing attention to others. Salk Institute neurobiologists are beginning to tease apart the complex brain networks that enable humans and other higher mammals to achieve this feat.

In a study published in the July 5, 2007 issue of Neuron, the researchers report two classes of brain cells with distinct roles in visual attention, and highlight at least two mechanisms by which these cells mediate attention. “This study represents a major advance in our understanding of visual cognition, because it is the first study of attention to distinguish between different classes of neurons,” says system neurobiologist John Reynolds, Ph.D., associate professor in the Systems Neurobiology Laboratory at the Salk Institute.

In the experiments, animals learned how to play a sophisticated video game, which challenged their visual attention-focusing skills. During the game, the Salk researchers recorded electrical activity from individual neurons in part of the visual cortex that has been implicated in mediating visual attention. (Please see video) 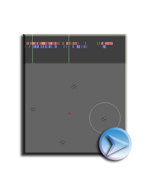 Attention Task. Each round of the game began when the eyes fixated a white dot surrounded by four striped circular stimuli on a video screen. A camera followed and recorded pupil position throughout the session, enabling the researchers to track eye position, which is indicated by small red cross. Two of the striped stimuli flashed momentarily, marking them as targets that should be attended, while continuing to stare at the central spot. The circle shows the location of the receptive field of the neuron under study on the day that this demonstration was recorded. After the striped stimuli moved to new positions on the screen, the animals proved that they had tracked the targets and knew their locations by making eye contact with the ones they were asked to track.

In the latter part of the demonstration, neuronal responses from individual rounds of the game are illustrated. Tick marks indicate when the neuron emitted individual action potentials. The researchers compared neuronal responses when the stimulus in the receptive field was tracked (red tick marks) or ignored (blue tick marks). The effect of attention differed markedly across the two different types of neurons.

As illustrated in the demonstration, the neurons respond when a stimulus appears within a window (indicated by the circle) covering a small part of the visual field that the eye sees. This window is known as the neuron’s “receptive field.” Whenever the stimuli entered the neuron’s receptive field, the cell produced a volley of electrical spikes, known as “action potentials”, indicated by vertical tick marks in the demonstration.

They found that neurons typically responded more strongly when attention was directed to the stimulus in their receptive fields. Upon closer inspection, however, the researchers noticed that different neurons produced different shaped electrical spikes: “broad spikes” and “narrow spikes.” Other researchers had previously identified two different types of neurons that produce these two waveforms. The most common neuron type, called a pyramidal cell, produces broad spikes. These neurons transmit signals between different brain areas. The other class, fast-spike interneurons evoke narrow spikes. These neurons only connect to their local neighboring neurons, and are involved in local computations.

After sorting the neurons by waveform, the researchers observed that attention had different effects on the two different types of neurons. The narrow-spiking cells typically fired more frequently when the tracked object was attended than when it was unattended. Broad-spiking cells, on the other hand, were less influenced by attention. Some fired faster, while others fired more slowly when attention was directed to the stimulus in the receptive field. What’s more, attention caused the stream of spikes produced by the narrow-spiking neurons to be much more reliable.

“By distinguishing among the different neural elements that make up the cortical circuit, we are gaining a view of the biological underpinnings of attention that is unprecedented in its level of detail,” says post-doctoral researcher Jude Mitchell, Ph.D., lead author on the study. He adds that, while there is much more work ahead, “if we can understand how attention is acting on different cell classes, this will significantly improve our understanding of the pathology of neurological diseases in which attention is impaired.”

Kristy A. Sundberg, a graduate student, also participated in the study.