From feast to famine: A metabolic switch that may help diabetes treatment

Home - Salk News - From feast to famine: A metabolic switch that may help diabetes treatment

From feast to famine: A metabolic switch that may help diabetes treatment

LA JOLLA, CA—Humans are built to hunger for fat, packing it on during times of feast and burning it during periods of famine. But when deluged by foods rich in fat and sugar, the modern waistline often far exceeds the need to store energy for lean times, and the result has been an epidemic of diabetes, heart disease and other obesity-related problems.

Now, scientists at the Salk Institute for Biological Studies have identified the linchpin of fat metabolism, a protein known as fibroblast growth factor 1 (FGF1), which may open new avenues in the treatment of diabetes.

In a paper published April 22 in Nature, the Evans lab reports that FGF1 activity is triggered by a high-fat diet and that mice lacking the protein swiftly develop diabetes. This suggests that FGF1 is crucial to maintaining the body’s sensitivity to insulin and normal levels of sugar in the blood.

“Because humans are good at storing fat during times of plenty, we are also excellent at surviving times of famine,” says Ronald M. Evans, a professor in Salk’s Gene Expression Laboratory and lead author of the paper. “The fat tissues of our body are like batteries, providing us with a steady source of energy when food is scarce. FGF1 governs the expansion and contraction of fat and thus controls the ebb and flow of energy throughout our body.” 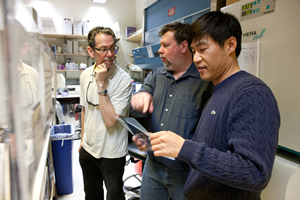 Obesity rates have soared in the United States in recent decades, with more than one third of U.S. adults and 17 percent of children and adolescents now considered obese, according to the Centers for Disease Control and Prevention.

As the number of overweight people has grown, so too has the incidence of metabolic disease, with nearly 26 million Americans estimated to have obesity-related type 2 diabetes. With annual costs exceeding well over $200 billion, obesity is a chronic disease that is consuming a huge portion of our health care dollars.

Although exercise and calorie restriction are known to be effective at preventing and treating diabetes, the obesity epidemic continues to grow and new drugs to treat the problem are desperately needed. Against this backdrop, the Evans lab discovery is an important breakthrough—and a surprise.

“The discovery of FGF1 was unexpected—and intriguing—because it was believed to do nothing,” says Jae Myoung Suh, a postdoctoral researcher in Evans’s laboratory and co-first author on the paper. “If you deplete FGF1 from the body, nothing happens when the mice are fed a steady low fat diet. But when given a high-fat, “Western-style” diet the mice develop an aggressive form of diabetes and experience a system-wide breakdown of their metabolic health. 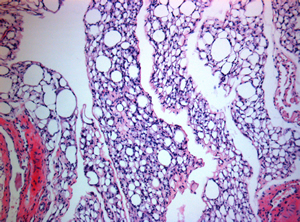 The Salk researchers discovered that mice lacking a protein known as fibroblast growth factor 1 (FGF1) were unable to store and use fat normally.

When these mice were switched from a high-fat diet to a normal diet, they developed uneven lumps of fat (seen in white in the above image) in their body tissues, suggesting that their fat metabolism mechanisms had gone awry.

“These abnormalities cause abdominal or stomach fat to become inflamed,” says Michael Downes, a senior staff scientist in Salk’s Gene Expression Laboratory and co-lead author on the paper. “This is important because inflamed visceral fat has been linked to heightened risk for diabetes and other obesity-related diseases, such as heart disease and stroke.”

The scientists also found that FGF1 is regulated by the antidiabetic drug Actos, which is used to increase the body’s sensitivity to insulin. But Actos and related drugs, though helpful, have side effects that limit their use.

Thus, Evans and his colleagues plan to explore whether FGF1 might point to a new way to control diabetes by avoiding the drawbacks of Actos and providing a more natural means of increasing insulin sensitivity.

Johan Jonker, a former postdoctoral researcher in Evans’s lab, now at University of Groningen, Netherlands, was co-first author on the paper. Other authors on the paper were: Annette Atkins, Maryam Ahmadian, Jamie Whyte, Mingxiao He, Henry Juguilon, Yun-Qiang Yin, Colin Phillips and Ruth Yu, from the Salk Institute; and Pingping Li, Jerrold Olefsky and Robert Henry, from University of California, San Diego.

The research was supported by the National Institutes of Health, the Leona M. and Harry B. Helmsley Charitable Trust and the Howard Hughes Medical Institute.