LA JOLLA, CA—By comparing a clearly defined visual input with the electrical output of the retina, researchers at the Salk Institute for Biological Studies were able to trace for the first time the neuronal circuitry that connects individual photoreceptors with retinal ganglion cells, the neurons that carry visuals signals from the eye to the brain.

Their measurements, published in the Oct. 7, 2010, issue of the journal Nature, not only reveal computations in a neural circuit at the elementary resolution of individual neurons but also shed light on the neural code used by the retina to relay color information to the brain. 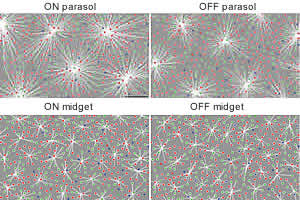 Image: Courtesy of Dr. E.J. Chichilnisky and the journal Nature

“Nobody has ever seen the entire input-output transformation performed by complete circuits in the retina at single-cell resolution,” says senior author E.J. Chichilnisky, Ph.D., an associate professor in the Systems Neurobiology Laboratories. “We think these data will allow us to more deeply understand neuronal computations in the visual system and ultimately may help us construct better retinal implants.”

One of the essential elements that made the experiments possible was the unique neural recording system developed by an international team of high-energy physicists from the University of California, Santa Cruz; the AGH University of Science and Technology, Krakow, Poland; and the University of Glasgow, UK. This system is able to record simultaneously the tiny electrical signals generated by hundreds of the retinal output neurons that transmit information about the outside visual world to the brain. These recordings are made at high-speed (over ten million samples each second) and with fine spatial detail, sufficient to detect even a locally complete population of the tiny and densely spaced output cells known as “midget” retinal ganglion cells. 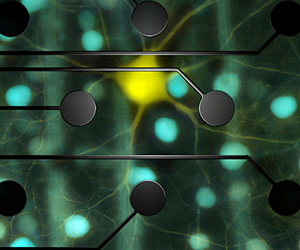 A unique neural recording system developed by an international team of high energy physicists, which is able to record simultaneously the tiny electrical signals generated by hundreds of the retinal output neurons, is one of the essential elements of the study. Recording electrodes are shown in the foreground and retinal ganglion cells in the background.

Retinal ganglion cells are classified based on their size, the connections they form, and their responses to visual stimulation, which can vary widely. Despite their differences, they all have one thing in common-a long axon that extends into the brain and forms part of the optic nerve.

Visual processing begins when photons entering the eye strike one or more of the 125 million light-sensitive nerve cells in the retina. This first layer of cells, which are known as rods and cones, converts the information into electrical signals and sends them to an intermediate layer, which in turn relays signals to the 20 or so distinct types of retinal ganglion cells.

In an earlier study, Chichilnisky and his team found that each type of retinal ganglion cells forms a seamless lattice covering visual space that transmits a complete visual image to the brain. In the current study, postdoctoral researcher and co-first author Greg D. Field, Ph.D., and his collaborators zoomed in on the pattern of connectivity between these layers of retinal ganglion cells and the full lattice of cone receptors. 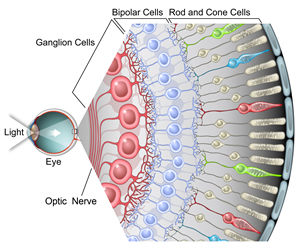 Photoreceptors in the retina convert visual information into electrical signals and send them to an intermediate layer, which in turn relays signals to the 20 or so distinct types of retinal ganglion cells.

When combined with information on spectral sensitivities of individual cones, maps of these punctate islands not only allowed the researchers to recreate the full cone mosaic found in the retina, but also to conclude which cone fed information to which retinal ganglion cell.

“Just by stimulating input cells and taking a high density recording from output cells, we can identify all individual input and output cells and find out who is connected to whom,” says Chichilnisky.

Researchers who also contributed to the work include co-first author Jeffrey L. Gauthier, Ph.D., Martin Greschner, Timothy A. Machado, Lauren H. Jepson, and Jonathon Shlens in the Systems Neurobiology Laboratory at the Salk Institute, co-first author Alexander Sher and Alan Litke at the Santa Cruz Institute for Particle Physics at the University of California, Santa Cruz, Deborah E. Gunning and Keith Mathieson in the Department of Physics and Astronomy at the University of Glasgow, Wladyslaw Dabrowski at the Faculty of Physics and Applied Computer Science at the AGH University of Science and Technology in Krakow, and Liam Paninski in the Department of Statistics and Center for Theoretical Neuroscience at Columbia University, New York.