La Jolla, CA — New work at the Salk Institute for Biological Studies reveals how a genetic switch, known as FoxJ1, helps developing embryos tell their left from their right. While at first glance the right and left sides of our bodies are identical to each other, this symmetry is only skin-deep. Below the surface, some of our internal organs are shifted sideways—heart and stomach to the left, liver and appendix to the right.

Creating this left-right asymmetry is a key step in early embryonic development, and requires hundreds of tiny hairlike structures called nodal cilia to beat in unison. Like microscopic conductors, cilia orchestrate a flow of embryonic fluid from right to left that allows the growing tissues to orient themselves. The current study provides new insight into the crucial role FoxJ1 plays in directing the development of these cilia.

“This one transcription factor regulates a whole suite of genes needed to coordinate the formation of nodal cilia,” says Christopher R. Kintner, Ph.D., a professor in the Molecular Neurobiology Laboratory, who led the study. Strikingly, FoxJ1 can induce cilia to form on the surface of cells that do not usually have them, the Salk researchers report in this week’s early online edition of Nature Genetics. Their findings may one day lead to a cure for ciliopathies, diseases that result from malfunctioning or damaged cilia. 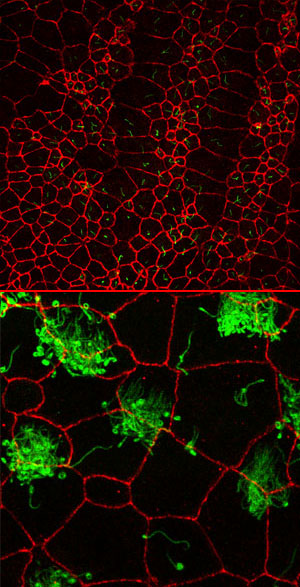 Top: In the developing embryo, nodal cilia (shown in green) orchestrate a flow of embryonic fluid from right to left that allows the growing tissues to orient themselves. The cells’ outlines are shown in red. Bottom: Motile cilia crowd the surface of specialized cells and move in harmony to generate liquid flow. Excess levels of FoxJ1 drive the formation of nodal cilia in usually cilialess cells.

Cilia—tiny hairlike protrusions found on certain cell types—come in three flavors. Motile cilia crowd the surface of specialized cells and move in harmony to generate liquid flow. They are used to sweep mucus and dirt out of our lungs and in females to propel the egg from the ovary through the Fallopian tube into the uterus. Unlike motile cilia, sensory cilia usually number just one per cell and are used to relay information back to the cell about its surroundings.

A third and less characterized subtype are nodal cilia. Nodal cilia share certain features with both their sensory and motile counterparts; they exist one per cell yet function to generate the fluid movement during embryo development that is crucial to forming the left-right asymmetry.

“We were interested in the developmental cues that drive the formation of these different cilia subtypes,” says Kintner. Clues from previous work in mice persuaded Kintner and his team to take a closer look at cilia in the South African clawed frog Xenopus, a model popular with developmental biologists, and zebrafish.

In mice, FoxJ1 is needed to drive the formation of motile but not sensory cilia. The Salk researchers depleted FoxJ1 in both Xenopus and zebrafish by injecting embryos with morpholinos, synthetic DNA-like structures that bind to nucleic acids and work like dimmer switches to turn down gene expression. When FoxJ1 was turned down, nodal cilia development was disrupted, causing organ displacement and defects in the left-right asymmetry.

The real surprise came when the scientists increased the levels of FoxJ1. “We started seeing cilia popping up all over the place,” says Kintner, “and they were not random subtypes; they looked just like the nodal cilia that form on the cells to generate the embryonic left-right flow.”

“These ectopic cilia were really interesting,” adds Jennifer Stubbs, first author of the study and a graduate student in the Kintner lab, “and no one had been able to show them in any other system.”

These findings call into question current theories as to how FoxJ1 regulates motile cilia. Motile cilia are anchored to the cell surface at sites called basal bodies, and FoxJ1’s role in their development was thought to act primarily by regulating this docking process. Since activating FoxJ1 was sufficient to drive the formation of cilia in usually cilialess cells, however, Kintner and colleagues reasoned that FoxJ1 must play a broader role in promoting cilia development.

They tested this hypothesis using microarray analysis to determine what genes FoxJ1 activated. Indeed, FoxJ1 increased the levels of a host of genes involved in motile cilia development rather than just a small set relating to the basal body. “This really suggests that at least in Xenopus, FoxJ1 is a master-regulator of ciliogenesis and doesn’t just play a role in basal body docking,” says Stubbs.

Kintner and colleagues are currently investigating in closer detail the suite of genes activated by FoxJ1 to further understand its mode of action. Doing so might help develop novel therapies to treat ciliopathies, whose symptoms range from respiratory defects to infertility. “In many diseases such as chronic asthmas and cystic fibrosis, trouble clearing mucus causes defects where the ciliated cells begin to die,” says Kintner, “and knowing about the dominant pathways that drive differentiation of ciliated cells types might allow us to do something prevent that situation.”

“It may provide a way of repairing ciliated cells that are already there, enabling them to regrow their cilia,” says Jennifer Stubbs.

Other researchers contributing to this work were Juan Carlos Izpisúa Belmonte, Ph.D., a professor in the Gene Expression Laboratory at the Salk Institute and Isao Oishi, Ph.D., a postdoctoral research scientist in his lab.