LA JOLLA, CA–A study by researchers at the Salk Institute for Biological Studies revealed that stem cells can sense a decrease in available nutrients and respond by retaining only a small pool of active stem cells for tissue maintenance. When, or if, favorable conditions return, stem cell numbers multiply to accommodate increased demands on the tissue.

Elucidating the mechanisms by which hormonal signaling influences stem cell behavior under normal conditions and in response to stress provides important insights into the activities of stem cells in regenerative medicine, during wound repair, and in individuals experiencing metabolic stress. The findings are published in the Nov. 4, 2010, online edition of the journal Current Biology.

“Tissues that are maintained by stem cells respond to adverse environmental conditions by reducing the overall number of stem cells, as well as the activity of those stem cells, but maintain them in such a state that they can respond quickly and effectively once the nutritional conditions become more favorable,” says Leanne Jones, Ph.D., assistant professor in the Laboratory of Genetics, who led the study. 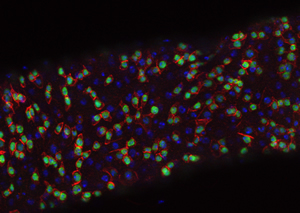 In flies that are fed a normal diet, an active pool of intestinal stem cells (green) is generating daughter enteroblasts (green nuclei surrounded by a red cell membrane).

Stem cells, with their defining characteristics-extensive proliferative potential and an ability to give rise to one or more specialized cell types-are common in early embryos. But by adulthood, only a few stem cells remain, tucked away in their own private niches. They have, nonetheless, retained a remarkable capability: They can operate at a “steady state” to maintain and repair tissues.

When living conditions become adverse, animals may go through a period of reduced metabolism to allocate limited resources and maintain tissue homeostasis. In addition, a number of animals, such as those that hibernate, experience a decrease in metabolic rate as part of their normal cycle.

“The molecular mechanisms coordinating tissue homeostasis with changes in metabolism are only partially understood,” says Jones. “In particular, very little was known about the effect of chronic changes in nutrient availability on adult stem cells and the tissues which they maintain.” 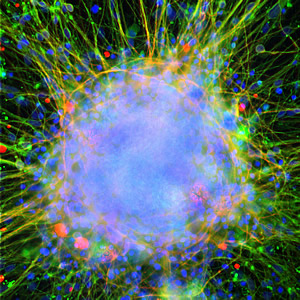 Male germ line cells at the tip of Drosophila testes (bright green) are undergoing a symmetric division. Both daughter cells are in contact with hub cells (red).

In the Drosophila testis, one of the stem cell “ecosystems” Jones studies, the stem cells sit at the tip of the testis, cradled in their niche, which is also known as the apical hub. As a stem cell divides, one daughter cell moves out of the niche to generate mature sperm cells. The remaining daughter cell stays put and retains its stem cell identity. In an earlier study, Jones and her team had shown that the hub cells send out a local signal, which supports neighboring stem cells, making hub cells an essential component of the stem cell niche.

More recently, they explored how the stem cells respond to changes in the metabolic state of an organism and how insulin signaling may regulate this process. The insulin/IGF pathway, which is best known for controlling blood glucose, serves as a “nutrient sensor” and plays an important role in aging in many organisms, including fruit flies.

When the researchers fed their flies a “poor,” proteinless diet, the levels of circulating insulin-like peptides plummeted, the testes of starved flies became progressively thinner, and stem cell numbers started to decline. Upon re-feeding, insulin-like peptide expression and stem cell numbers recovered quickly. “We found that in starved flies there are fewer stem cells and they divide slower,” says postdoctoral researcher and co-first author Lei Wang, Ph.D. “However, a small pool of active stem cells remained even after prolonged starvation.”

Since germline stem cells are the only cells capable of passing genetic information on to the next generation, the researchers suspected that unique strategies might have been adapted during evolution to protect these stem cells from temporary environmental changes. However, as they discovered, a similar response to protein starvation and re-feeding was demonstrated by another stem cell population-intestinal stem cells present in the midgut. This suggests that the coordination of stem cell maintenance in response to environmental changes represents a conserved strategy utilized across multiple tissues.

Jones and her team think it likely that the link between insulin signaling and stem cell response will turn out to be important not only for nutrient deprivation but also for other situations where a body’s metabolism might be altered. “One may think of how tissue homeostasis is modified in a situation when the body cannot accurately monitor or utilize available nutrients-for instance, in case of a person who is diabetic,” says Jones.

“Further investigating the relationship between nutrient availability and stem cell behavior may also lead to clues for why people who are overfed or malnourished are prone to develop metabolic diseases or cancers, in which cells fail to differentiate properly,” adds Wang.

An intriguing question arising from the study is whether an extreme shift in a patient’s eating habits could be considered an element of a treatment.

Researchers who also contributed to the study include Catherine Mcleod, Ph.D., and Chihunt Wong.