FISH-ing for links between cancer and aging

Home - Salk News - FISH-ing for links between cancer and aging

FISH-ing for links between cancer and aging

La Jolla, CA – Wielding a palette of chromosome paints, scientists at the Salk Institute for Biological Studies have taken a step closer to understanding the relationship between aging and cancer by visualizing chromosomes of cells from patients with a heritable premature aging disease known as Werner Syndrome.

In a study to be published in this week’s online edition of the Proceedings of the National Academy of Sciences researchers led by Jan Karlseder, Ph.D., assistant professor in Salk’s Regulatory Biology Laboratory, showed that rebuilding structures called telomeres, which are found at the tips of each chromosome, significantly blocks the type of genetic damage seen in cells of patients with Werner Syndrome. 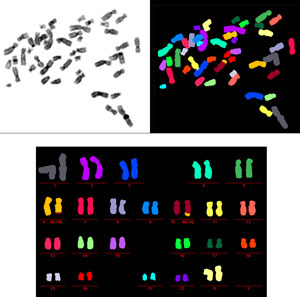 The chromosomes were isolated from a cell taken from a patient with Werner Syndrome, a premature aging disease that is caused by the loss of the WRN gene. Painting each chromosome pair in a different color reveals the breakage and fusion of chromosomes (see chromosomes 6 and 10), which causes genomic instability and could explain the high incidence of cancer among individuals with Werner syndrome.

Patients with Werner Syndrome manifest signs of aging, such as skin wrinkling, baldness, or hair graying, in their teens. Most die in their 40’s or 50’s due to a predisposition to diseases like cancer. “Cancer is almost always related to chromosomal instability,” explains Karlseder. “If telomeres are lost on individual chromosomes, then chromosomes are not protected and can fuse with other nonprotected chromosomes. Then when cells divide, chromosomes randomly break, leading to genome instability.”

The current study extended work published in 2004 by Karlseder and first author Laure Crabbe, Ph.D., who was a graduate student in the Karlseder lab at the time. In that work, the team used a technique called FISH – short for fluorescent in situ hybridization – to microscopically visualize both the telomeres and chromosomal DNA from Werner Syndrome patients. They reported that some protective telomeres were actually missing on patients’ chromosomes, a finding Karlseder describes as “a fairly catastrophic event for a cell.”

For the current study, Salk researchers grew cells from Werner Syndrome patients in tissue culture dishes and, aided by colleagues at the Institute of Human Genetics in Heidelberg, Germany, evaluated DNA damage using a highly colorful variation of the FISH technique called chromosome painting. This technique “paints” or labels every pair of the 46 chromosomes with a different colored fluorescent dye, enabling investigators to easily see breakage or fusion of chromosomes that are characteristic of damaged DNA under the microscope.

Then they artificially supplied the cultured cells with one of two genes – either a functional copy of the WRN gene, which is mutant or nonfunctional in Werner Syndrome, or a gene encoding the protein telomerase, which elongates short or missing telomeres. After cells divided several times, their DNA was reexamined for the type of damage associated with both aging and cancer.

Cells supplied with a functional WRN gene showed decreased DNA damage compared to untreated cells, which was predictable: the WRN gene encodes a protein called a helicase that unwinds tightly coiled DNA strands when cells divide. Loss of WRN protein in individuals with Werner Syndrome is responsible for the disease. Explains Crabbe, now a postdoctoral fellow at The Institute of Human Genetics in Montpellier, France, “The lack of a single protein (WRN) induced loss of some telomeres, leading to a premature cellular growth arrest.”

However, the most interesting finding was what the scientists observed in cells supplied with added telomerase. “When we put telomerase into cells, we suppressed accumulation of mutations to the same degree as when we put the WRN protein back,” reports Karlseder. “It fixed the defect by elongating short telomeres seen in Werner Syndrome cells.”

Crabbe, who is continuing to study DNA replication as a postdoc, concludes that these findings not only provide a mechanism underlying accelerated aging seen in Werner Syndrome but establish a link to cancer predisposition, saying, “These results indicate that the telomere dysfunction in Werner Syndrome cells is a major cause of genomic instability and could explain the high incidence of cancer seen in this disease.”

Translating these findings into a treatment for Werner Syndrome will be extremely difficult. However, Karlseder feels optimistic about what these investigations show. “We study this disease because it is an excellent model for aging, and we show here a direct relation between aging, telomere loss, and cancer occurrence,” he says. “I predict that cancer in older people has precisely the same basis as that seen in Werner Syndrome patients. That is why this was such a satisfying study.”

Also contributing to this study were graduate student Colleen Naeger in the Karlseder lab and Anna Jauch, Ph.D., and Heidi Holgreve-Grez, Ph.D., in Heidelberg.